← For Such a Little Thing…
The Trouble With Mermaids →

The Rise and Fall of the Gorg Empire 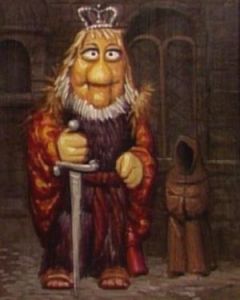 So, on occasion I watch Fraggle Rock. My daughter likes it; we have some of the DVDs and play them often. Since I’ve watched the same three episodes or so over and over and over again to the point where I can probably recite them from memory, I’ve gotten to the point where I’ve begun to overthink every aspect of the show. My usual target for such ruminations? The so-called Gorg Empire.

Seriously, what the hell is up with the Gorgs?

It goes without saying that the so-called King and Queen of the Universe do not rule a kingdom, do not have an empire, and have no subjects. They mention how they have never met their subjects on at least one occasion, and it is only very rarely that we see other beings in their world at all. We are forced, then, to presume one of two things:

Being a literature guy, I know that #1 is never the right answer. No, they aren’t just ‘crazy’ – that’s a cop-out. That leaves us with option #2: post-apocalyptic Gorgs eking out a living on a wild scrap of land among the bones of their civilization. The parents persist in the fiction that the empire is alive and well because they cannot fathom explaining to the child the atrocities that brought them to this turn and, furthermore, are probably not emotionally equipped to handle the revelation themselves. Accordingly, they cling to the old traditions and tell the old stories and pretend nothing is amiss.

The reason for the collapse of the Gorg Empire could be anything–war, famine, natural disaster, plague, or whatever. Without asking Madam Trash Heap, we will never know for certain. My favorite theory, though, is this one: the Fraggles did it.

You know how Queen Gorg is always freaking out anytime she sees a Fraggle? They’re considered vermin, right? 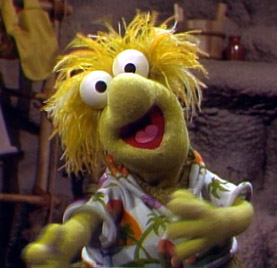 Well, one of the reasons we humans have instinctually negative reactions to vermin is because they represented a health risk to our ancestors – they ate our food, they spread disease, and they rendered areas unliveable. The Fraggles are the same thing – they are vectors for disease. Furthermore, since they happen to be quite intelligent vermin, they would be exceedingly difficult to eradicate. Centuries or even millennia of Gorg history likely passed with Fraggles ravaging gardens and ruining abandoned homes. This, though, doesn’t destroy the empire, does it? They’d need to spread some kind of terrible disease that the Gorgs would have no defense against. Wherever could the Fraggles have gotten such a thing? Hmmmm…

Right: Earth. Outer Space – favorite home of such civilization-killing diseases as smallpox, the bubonic plague, and even cholera. The legends of Outer Space abound even before Travelling Matt makes his sojourn through the workshop and into the world, so presumably fraggles had been there before. Some fraggle could have popped out into Outer Space, looked around, and then popped into the Gorg Empire to raid some cabbage. A sneeze or some tainted water later, and boom – a deadly plague raging across the continent. In our own history, diseases spread to new continents were terrible to behold; it doesn’t stretch the imagination much to think a cross-world plague would be worse. Dead Gorgs piled in the streets. Plague carts roving the countryside. The collapse of civic order, the decent of the barbarians – death, destruction, and unending pestilence.

Mamma and Papa Gorg were the lucky ones – immune to the disease, survivors of the chaos that followed. Can you blame them for holding on to the past? What have they got to live for now? Radishes? An idiot son?

Chills the bones, don’t it?

Anyway, these are the things I think about while watching children’s programming.

← For Such a Little Thing…
The Trouble With Mermaids →