← Disney: The Real Headlines
Laughing From the Mountaintop →

How To Fix Star Wars: The Phantom Menace

The topic of this post is probably nothing new. People have been sounding off on what is wrong with the prequels ever since the ‘New Star Wars Glow’ wore off Episode 1 and all of us, collectively, realized that the troubling feeling in our guts whenever we watched the movie was the fact that it was, after all, a bad movie. I and my friends (most notably my friend Matt M and I) have discussed at length how to fix the prequels and make them good movies – an edit, if you will – and, seeing as the films are getting released again in …err…I mean ‘3D’, now seems as good a time as any to give you my theory for how to make the movies better. I’ll probably write one of these as they are released, just for the hell of it. 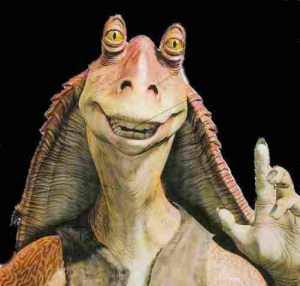 Meesa the symptom, not-a the cause!

Yes, Jar-jar sucks. We all know he sucks. We all wish he weren’t there. Jar-jar isn’t the problem, though. There are plenty of annoying characters in actually good movies and we forgive them and still like the movie just fine (think Roger Rabbit, C3P0, Billie from Temple of Doom, Data, etc.). Why can’t we forgive Jar-Jar?

We can’t because there is no other interesting characters to watch!

Qui-Gon Jinn is exhaustingly boring, Obi Wan is a rebel with nothing and nobody to rebel against, Amidala is like a piece of talking furniture, and Annakin is played like a kid dragged out of central casting and asked to play, well, a kid. Jar-Jar is put in the movie for comic relief, right? But we don’t need or want comic relief in this film because there is no dramatic tension to be relieved.

The Solution: We need to change up the characters, and badly. Here’s my suggestion, as follows:

Step 2: Nobody Cares About Trade Embargoes

Economics-based conflicts play poorly in a space opera. I get it that Palpatine wants to spark a war that allows him to buy a private army, but that doesn’t mean he needs to spark it over a trade imbalance and legal technicalities. It lacks tension for the audience and doesn’t sustain the kind of heart-stopping action the movie needs.

The Solution: The species occupying Naboo wants it for its natural resources – notably it’s biomass. They’re strip miners, loggers, and so on and feel that the Naboo haven’t been taking their pleas seriously. With Darth Sideous backing them up, they finally have the balls to go over and take what they want. If you want to demonstrate that the Trade Confederation are bad guys, have them clear-logging forests, draining Gungan swamps, building giant, ugly droid factories and forcing the people into labor camps. There – evil – we get it.

Many of the action scenes in The Phantom Menace, while well choreographed, aren’t all that much fun. Why? We don’t care about the outcome. I’ve written about this before , and much of the problem ought to be amended by having better characters, but there are still things that can be fixed. Here, in order, is how I’d run the plot:

See? The movie really isn’t that bad if you just give your characters something to do for a reason. These changes also set things up for the next two movies, too – we’re telling a tragedy here, so we need to work on building pathos. Anyway, there’s my .02, for what they’re worth. Not much, I know, but hey, a guy’s entitled to his opinions, right?

I’d go see this movie, anyway. There’s no way Lucas is getting $15 from me to watch his dull version again. I saw it four times when it came out and twice since then – I’m done.

← Disney: The Real Headlines
Laughing From the Mountaintop →