← A Tale for Every Dungeon
Happy Endings Only! →

Asteroid Mining and Other Crazy Ideas

So, a bunch of rich guys have finally gotten around to trying to mine asteroids. 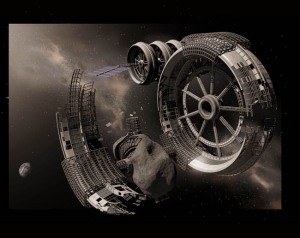 If you're hoping for something that looks this cool, don't hold your breath. Those mining robots will have more in common with that vacuum that bumps around the bottom of your pool.

I say ‘finally’ because I sort of felt this was inevitable. Sooner or later I knew that forward thinking, stupidly rich people with nothing else to spend their gobs of money on would try investing in outer space for profit. This seems the most likely first step towards actually colonizing space. That said, I very sincerely think these guys are going to lose their shirts over this venture. They are going to manage to mine the most expensive iron ore in the history of the world in the hopes that they’ll find platinum. You watch.

That, though, isn’t the point. The point is that this is the beginning of an exciting, new phase in our species’ history (I hope). Companies like this one and SpaceX are blazing the way for a new era of colonization, but powered by private interests, not governments. There is precedent for this, remember: The British East India Company colonized India for their own profit, not for the glory of Britain. The settlers at Jamestown were likewise looking to make a quick buck. Chris Columbus crossed the ocean blue looking for spices and gold, not fame, and it was his desire for glory and wealth that made him wheedle the money for the trip out of Isabella and Ferdinand of Spain.

All it’s going to take for the colonization of our solar system to take off is for somebody, somehow, someway to find profit out there in the Big Empty. Then everybody will be chomping at the bit to get out there. The technology, if it isn’t developed, will get developed. If that happens then, finally, thankfully, perhaps this planet will make it past this particular stage of exploratory stagnation. That, my friends, will be a really exciting time. Science Fiction made fact. New social dynamics, new cultures born outside the gravity well, and, of course, space pirates.

We all want space pirates. Admit it.

← A Tale for Every Dungeon
Happy Endings Only! →