Rebuttal: I Will Cut Off Your Head and Steal Your Women

Disturbing news reaches the ears of Vrokthar the Skullfeaster, Scourge of the Northern Wastes. As I brood upon my throne of desiccated entrails, I am told of a soft wetlander praising the virtues of strapping armor across one’s body. 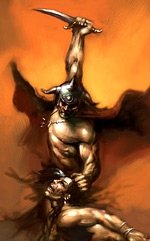 This angers me. How typical of soft, womanly wetlanders to cower behind their technologically sophisticated weapons technology. Here, in the Wastes, true men face death with their chest bare and their great axe held high, to show their contempt for the weakness of their opponent. When Vrokthar goes to battle, he wears nothing but the blood of a holy bull, slaughtered as a sacrifice to Mook’ta, the God of Mindless Hatred. Never has Vrokthar died in battle, and this is proof of the effectiveness of his holy protection. The warriors that die when thusly blessed were not true believers, and so it is that the tribe of the Meaty Fists is the most pious of all the great tribes.

Only those who wet themselves with fear would cover themselves with articulated, battle-tested protection harness. Those who fear are not men, but women. So it is that Vrokthar makes a point to plant his seed in all armored wetlanders he captures, as they are clearly women. That they have failed to bear Vrokthar sons is little surprise – the soft, wetlander womb is poor soil for his harsh northern seed. Indeed, Vrokthar is so virile that he has yet to discover even a Northern woman capable of bearing him a son. All he has is useless daughters, whom he sells to buy mead for his tribesmen, for he is a great and noble man.

If the well-disciplined, well-equipped armies of the weakling civilizations of the south come to battle and it does not please Vrokthar to offer them battle, this must not be interpreted as cowardice. Vrokthar has no need to prove his naked flesh and mighty battle-cries against the womanly ranks of an organized army. What would such battle prove? There is no honor in killing limp-dicked men who have made themselves into a walking wall of steel. How could Vrokthar even determine which of their skinny, fruit-slurping number is the chief and challenge him to single combat? If Vrokthar cannot engage his enemy in single combat, then Vrokthar has better things to do. He will pack up his entire tribe and vanish into the steppe, making the so-called invicible legions of the south appear foolish as they occupy our worthless territory and find nothing but goats and scrub-grass. My, the laughs we have at their wretched expense.

Vrokthar wishes to speak no more of such foolishness as ‘armor’ and ‘discipline’. It is time to drink mead and take pleasure among the sheep. We will do this naked, as the God of Mindless Hatred intends. He smiles upon us, and laughs at your foolish wetlander ways in your soft, warm, prosperous cities. We are mightier than you, and will die a glorious death in battle long before any of your own soldiers.

That or dysentery. Very many of us die of dysentery.