← Going It Alone: The Die Hard Effect and RPGs
Someone Great That Way Passes →

How to Execute a Proper Portal Attack

Saw The Avengers finally last night. Great superhero movie – tons of fun, lots of good stuff for comic book fans, enough for non-fans to enjoy, and with snappy dialogue and good pacing. A popcorn movie, certainly – nothing terribly profound or emotionally compelling about the whole thing – but the exact kind of movie the big screen does so well. 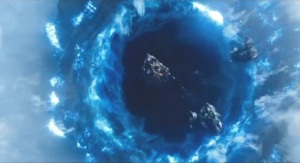 There are a number of tactical liabilities to bringing space jet-skis to bear on NYC.

Anyway, it isn’t a spoiler for me to point out that, at some point in the movie, a whole bunch of bad guys attack New York city from a portal they open above it. If you’ve seen the previews, you can surmise as much. It also isn’t much of a spoiler for me to reveal that, through much trial and tribulation, the Avengers win the day and the portal assault fails. This failure, however, I feel has as much to do with poor planning on Loki’s part as it does with the interference of the Avengers. Indeed, Loki is committing the same errors that every portal assault plan executed by every alien/extradimensional being has made since they started doing this portal thing.

The primary benefit of using a portal to teleport your army into battle is that of surprise. Since you can get your army to show up anywhere, this is a useful way to hit the enemy where and when they least expect it. I suppose, in the long term, it would also serve as a logistical benefit, as well, since supplying your troops could be as easy as trotting down to the Stargate room and lobbing through some sandwiches and spare clips of ammo. Given that I’ve rarely seen a portal assault go well enough for this to come into play, I’ll leave that part by the wayside for the nonce.

Anyway, surprise is great. Surprise can turn a battle in your favor. Surprise is a big deal. Surprise, however, is not the only factor you need to consider. You also need to consider when and how to use surprise to your best advantage. Attacking New York City, for instance, is a crappy place to utilize this surprise attack. Why? Well, New York City isn’t a direct threat to your invasion. It’s not a fortress. It isn’t an armed camp. Hell, the place can’t even feed itself. If you conquer New York City, you don’t ‘win’ the battle for Earth automatically. You definitely ruin the investment portfolios of many millions of people, but that’s much different than conquering the Earth. Plenty of military forces still out there, ready to mess you up.

Besides, attacking New York City from right out of a portal isn’t likely to work, anyway. This, however, speaks to the portal’s various disadvantages.

Portals suffer from a number of very important disadvantages. First among these is the size of the portals themselves. Typically (such as in the Avengers) they are portrayed as being only large enough to admit a relatively small number of troops at a time. Now, any general will tell you that trickling your forces through a narrow space into a hostile landing zone is a great way to get yourself walloped, as the Persians learned at the Battle of Thermopylae. This is part of the reason why amphibious assaults are such dicey propositions and require so many resources to successfully execute – you’ve only got so many guys in so many boats. Each boat you lose means you lose a proportionally large part of your assault force.

Related to this, portals also suffer from the ‘eggs in one basket’ problem. If you’ve only got one portal and the enemy closes that portal, you instantly lose the battle. Bummer. Why, then, do the bad guys always seem to open these portals in places that are easily accessible to the enemy, in positions that allow the enemy to easily engage them, and at times when, far from surprising the defenders, gives them sufficient time to organize a counter-attack?

How to Do it Right

If you want to bring in your otherworldly invasion force through rifts in space/time, then I have some advice for you:

So, there you have it. The best way to use your portals is to use them carefully and, ultimately, with a mix of caution and long-term goals in mind. Shock-and-Awe only works if you are dropping hundreds of portals producing hundreds of thousands of soldiers into the mix, so if that’s not in the cards, don’t try it.

← Going It Alone: The Die Hard Effect and RPGs
Someone Great That Way Passes →