← Superman and Batman
Graceful Ladies of the Skies →

The Shadow of George Lucas

I saw GI Joe: The Rise of Cobra the other day. It was on television and nothing else was on, just to defend myself a bit. I caught it somewhere in the second act or so and managed to watch the entire thing, even though it had commercials. I did it more as a thought exercise than because I was enjoying the movie.

Years ago, when it came out in theaters, a couple friends of mine were going to see it and were excited. “Have you seen it yet?” they asked me. My answer was no, I haven’t seen it specifically, but that I had seen it before, and so had they. I then told them the approximate plot of the movie, based largely off of the trailer and what kind of movie it was. Now that I’ve seen the film, I am (dis)pleased to see that I was, for the most part, exactly correct. I even predicted who would betray whom and when and more-or-less why, the location of Cobra’s secret base, and the general timbre of the final battle.

I was able to do this for one reason and one reason alone: Star Wars. The original trilogy, Lucas’ masterwork, has had a

That window back there look familiar to you?

pervasive influence on how big budget action/sci-fi movies are made pretty much since the original trilogy completed with Return of the Jedi. The GI Joe movie was worse than most. They had the super death fortress, the guys getting thrown down pits full of lightning, the big gun turrets (and, by the way, why would you install underwater gun turrets on your secret arctic base? Isn’t that sort of a waste of resources? How often will you be attacked by fleets of mini-subs?), the Death Star-esque super weapon, the plucky band of minisubs going head-to-head with Cobra  minisubs, and even the race against the clock to keep the doomsday weapon from 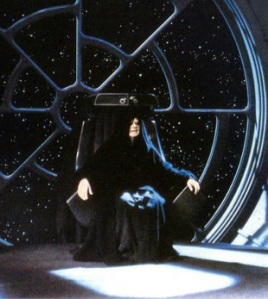 destroying the good guys’ base. It was so re-hashed it was embarrassing. Even the sets looked extremely similar.

GI Joe: The Rise of Cobra might be a particularly egregious example, but there are plenty of others. Avatar and its pseudonatural mysticism, for instance, or Independence Day and its multi-layered battle to destroy the enemy superweapon before it destroyed home base. There are lots of others, too. Now, some of this is understandable and, to some extent, inevitable – the reason Star Wars is so popular is because it, itself, is drawing upon very old adventure story tropes. It isn’t necessarily bad, either –  there are always ways to make tropes fresh and fun and interesting. Tropes can create a kind of conversation among works, a progression of innovation and growth within a genre, in the same sense that one can write a variety of waltzes or marches or bluegrass music and not be boring or uncreative.

GI Joe, though, wasn’t doing this. It wasn’t even interested in being interesting, per se. They were being formulaic for the sake of safety. The producers were investing vast sums of money into that film and they wanted a guaranteed return on that investment. The best way to do that, of course, is to mimic those properties which did just that. In this case, that means Star Wars. In a fit of irony that boggles the mind, Lucas himself opted to mimic his own work in Episode I to attempt to achieve the same effect. He didn’t add anything new, though, and he failed to gain the audience’s sympathies for the characters which, itself, undermined the entire enterprise. He couldn’t escape from his own shadow.

It is important, though, for writers (screenwriters or otherwise) to escape from the shadow of Star Wars if writing a story in that genre. Joss Whedon, for instance, managed to do it well in Avengers and Firefly. It can be done. It should be done, so that the geeks of the universe aren’t constantly pandered to by Hollywood with more formulaic nonsense which, honestly, we shouldn’t indulge. I’m not going to call for a moratorium on doomsday weapons or giant space battles or swordfights near power generators, but I think we can all ask ourselves to strive to go a bit further than the minimum when trying to amaze and stupefy the audience. Right?

← Superman and Batman
Graceful Ladies of the Skies →