My Favorite PCs: The Vesten

The 7th Sea campaign I ran from 2001-2004 was an exceptional thing. It produced a greater concentration of fantastic characters than any other campaign I’ve run and, to some extent, forged the gaming group I still play with today. This campaign featured Helmut Dauben Kohb, the statistically improbable, unkillable Eisen, as well as Lord Edward, the shamelessly hilarious rake. But they weren’t alone by any means. I have yet to tell you about the Vesten. 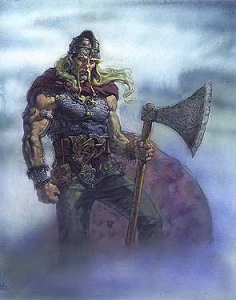 The legend, but not the man…

The first thing that is amazing about the Vesten is that it was, in reality, two separate characters. The first was named Ruin, played by my friend Bobby, who was a towering viking goliath of the Vesten people, a reincarnation of a hero of legend named Valkar, who was fated to slay the Great Wyrm. The second was his friend and countryman, Galdar (played by my buddy DJ), a powerful rune-mage and a man who, at various points in his life, was priest, warrior, pirate, and merchant. The two of them–both powerful, savage northmen who struck down all who opposed them–managed, unintentionally, to find themselves doing things in different places at different times. The common people of Theah could not divorce the two (how many blonde barbarians could be running around destroying Montaigne ships or crushing Vodacce merchant fleets at the same time, really?) and so rolled them into one immortal folk hero/terror called, simply, the Vesten.

Both characters were very different from one another. Ruin was garrulous, reckless, guileless, and without fear. Galdar was vengeful, brooding, careful, and stern. Ruin was a wrestler; Galdar was a boxer and pistollier. Ruin became the master of his own school of hand-to-hand combat, Galdar became a living embodiment of the Rune of Fury and was lightning incarnate. Both of them tread the line between myth and reality: Ruin wrestled with a grendel and answered the riddles of a dragon (one of the most tense sessions ever, incidentally: no rolling, just me asking riddles and Bobby having to answer them correctly or see his character plunged into a fiery abyss). Galdar fought with Krieg, the Vesten God of War, and turned down his proposals and, at the conclusion of the campaign, sacrificed himself to become a five-hundred foot pillar of lightning and storm clouds to destroy the Ultimate Evil. Their battles and their choices built reputations for their characters that topped those of even the most famous heroes and villains of the game setting. They had a little race: the player who had the highest reputation at the end of the campaign would ‘win’. It was a close thing–they had reputations of 135 and 130 or so. To put this in perspective, few characters manage to top 50, even in a long standing campaign. When they took action, the world shook.

This is, ultimately, what made them such amazing characters: Bobby and DJ’s actions through their characters actually changed the campaign setting. They diverted the paths of nations, they destroyed long-standing terrors, and uncovered new knowledge and new ideas to change what the world would become. What is exceptional about this is that I didn’t make them do it. They had the choice to take the easier path–to be, like most RPG characters, drifters in the stream of the world–but they refused. They wanted their characters to change the world, and they did.

Managing this as a GM, you can imagine, was challenging. I had to loosen the reins a bit, let them do what they wanted, and allow the plot to form itself in reaction to their decisions. It forced me to let go of my preconceived notions of what the story ‘was supposed to be’ and let it become something else equally awesome. I confess to trying to rein them in from time to time (if for no other reason than to let the other players step up to the plate more often), but overall I think I allowed them a lot of freedom and the campaign was better for it. When Galdar (or one of his aliases–Galdarus or Gillis) wanted the Vendel to build him a great warship, they did. It was the best damned warship in the world, and they used it, dammit. Did it break the campaign? No–it changed it. Change is not bad, or at least not necessarily so. Losing control as a GM doesn’t always mean ruining your campaign. Sometimes, with the right players, it means making the campaign one your players will be talking about for years and years to come.