← To Fear the Unknown
Mage →

Just how long can you go getting everything you want? 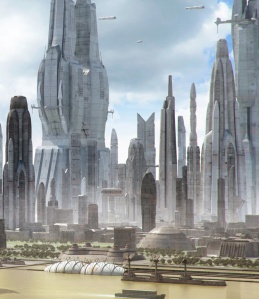 Pretty, but utopia is overrated.

The simpleton answer is ‘forever’, but you need to think a bit harder than that. Consider how human beings use their time at the moment. In the so-called Third World, much time is spent surviving – getting food, getting water, maintaining shelter, etc., etc.. Proportionally less time can be spent enjoying oneself thanks to the insecurity of their situation. Move up to the so-called First World, and ‘survival’, as such, is generally easier. We spend a lot of our time working to make money, yes, but we have more opportunity to entertain ourselves and much greater ability to acquire whatever it is we want, though that is limited by income. Still, when compared to the huge number of people in the world who make less than a dollar a day, your ~$700 a week job is pretty sweet.

Still, we in the First World aren’t satisfied – we want more money, more property, better vehicles, better skin, bigger muscles, smaller waists. We want the train to show up at the exact moment we step onto the platform, we want our iPhones to function while miles above or beneath the surface of the Earth, we want our fridge to re-fill itself with ice cream all by itself, and for that ice cream to be somehow healthy for us. These are, in common parlance, “First World Problems”.

Okay, so say we solve all those problems. Eternal youth and health. Unlimited fun and games. No work at all. No danger.
Cancer cured, traffic eliminated, energy for free, and all the healthy ice cream you can eat forever and ever and ever and ever. Then what?

In Utopia, we probably start complaining about even smaller things. We want to re-arrange the freckles on our face into a pattern more aesthetically pleasing. We want our dogs to talk to us in Scottish accents that are more realistic than the ones we genetically engineered them to talk in now. We think it’s really inconvenient having to hold our breath underwater, so we push for federal legislation mandating all children be able to breathe water.

So, eventually, say we get all that. Then what?

If you take away all the challenge, all the struggle, all the potential for failure…what do you have left? Iain M Banks explores this (somewhat) in his Culture series, and Arthur C Clarke goes through Utopian ennui in Childhood’s End. Others have covered it, as well. Even Idiocracy, to some extent, wonders what a society of near-perfect comfort would do to us. To my mind, it isn’t positive. It would have negative social effects we have difficulty imagining.

I write this, now, just as Johns Hopkins is discovering a way to regenerate adult blood cells into embryonic stem cells. It’s still unclear what this might mean for humanity, of course, but it has great potential to make the comfortable even more comfortable. I think about that a lot – and talk about it often on this blog. How much comfort do we really need, anyway? When did living into your seventies/eighties and dying equal ‘dying too young?’

What I hope for these technologies is that they aren’t simply used to make the wealthy and the powerful (in which I include most residents of the First World) immortal – they really, really don’t need to be. What I’d rather see is these technologies deployed so that all of us – all humanity – can live in the state of relative comfort that we First Worlders do now. I think this because, ultimately, First World Problems are good problems to have – not too terrible, but not so easy that we forget what it means to be alive, to struggle, and to achieve.

← To Fear the Unknown
Mage →