George S. Patton once said “Fixed fortifications are monuments to the stupidity of man.” He was, at the time, referring to how the advent of combined arms, mechanized infantry, and mobile warfare had, more or less, rendered fixed defenses worthless in modern warfare. History has proven him right over and over again; hiding behind your wall or huddling in your fort not only fails to win wars, it can actually lose them.

And yet, we still love them so. Fantasy is awash in invulnerable castle after invulnerable castle; science fiction provides us with a stunning array of ridiculous space fortresses. Our hearts sing at the image of unassailable battlements flying the snow-white pennants of our allies. We look up and Minas Tirith and say ‘ooooooo!’

There’s just something about a really cool fortress, isn’t there? It hearkens back to childhood, where the tree forts with the retractable ladders kept away our little sisters and the right sign posted on a bedroom door would ward away any unsavory individuals from infiltrating our inner sanctum. We revel in that kind of invulnerability, that capacity to protect ourselves from the potentially harmful outsider. It’s basic, infantile obsessions with stability and security writ large.

Think about the number of super-castles and space-bastions you’ve encountered. Now, ask yourself a follow up question: how many of them have really proven themselves as safe as advertised? Let’s face it, guys – anytime somebody wants to sneak in or out of a castle, they’ve done it. Sam and Frodo simply walked into Mordor, right? Minas Tirith was toast if it weren’t for Rohan and Aragorn’s army of ghosts. Both Death Stars were blown to smithereens by guys in tiny fighters. Wildlings jump over the Wall like it’s a sport. Andy Dufresne swam through a river of shit and came out clean on the other side. These impenetrable citadels are pretty much never unassailable. There is always a way in, and often all it takes is brute force.  So, what does that say?

I think, perhaps, what’s going on here is the other side of that childish wish for security – the equally childish desire for power. For every kid that loves building sand castles, there’s another kid that loves to see the ocean wash them away. Often, they’re the same kid. Putting them together is great, but tearing them down is just as good. Why? Well, we gain the satisfaction of knowing we can protect ourselves (at least symbolically) and the added satisfaction that no one can be protected from us. Hell, isn’t that the basic ethos of the US Marine Corps?

When we see a fortress in science fiction or fantasy (or anywhere else, for that matter) we are observing humanity’s desire for order and stability. When we see one torn down, we witness humanity’s desire for chaos and change. This is a duality at the soul of what humanity struggles with all the time, everywhere. It’s in the news virtually ever single day. It controls our political spectrum, colors our dreams and fears, and determines where we build our homes and the kind of locks we put on our doors. 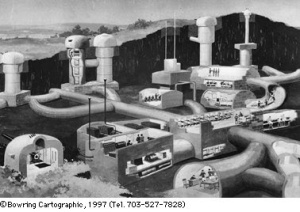 Remember how well this worked for the French?

So, when Patton says those pretty castles and super-cool space fortresses are monuments to our own stupidity, he’s still 100% right. The thing is, though, that there isn’t a whole lot we can do about it. We still expect ambassadors in Libya to be safe when they hide inside particularly strong rooms. We still put our trust in our walls and our guns and our barbed wire, even though there’s a guy out there outmaneuvering us before we’ve finished laying the foundation.

Now, does this mean we stop trying to protect ourselves? Of course not. We couldn’t even if we wanted to. What it does mean, though, is that we should remember the lessons of those ancient (and currently unoccupied) fortresses of old and the ruins of those imagined fortresses of the supposed future – Change is coming. You can’t fight the Change, man. Learn to adapt.