The Depths of Evil

Defining evil can be difficult, especially for the nuanced and sophisticated mind. Every act, you see, springs from a place of positivity, essentially. Very few people go forth to act in an evil manner; even the selfish believe that, thanks to their selfishness, they are somehow helping the world if only by proving to everyone else that the world needs no help. All villains, on some level, can have their behavior boiled down to that which is understandable, if misled. Barring that, we write them off as ‘insane’ or ‘ill’ – conditions that rob them of their free will. 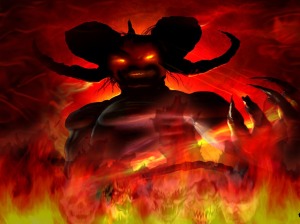 I refuse to give a crap!

What, then, is the source of true evil? To me, true evil is comprised in something akin to ‘gleeful apathy’ or, to put it another way, as the refusal to believe or even care about something as being any more important than any other thing. Nihilism, essentially.

When I was teaching John Gardner’s Grendel to my students recently, we were discussing Grendel’s conversation with the Dragon (which, by-the-by, is one of the more mind-blowing sections of prose I’ve ever read). We wound our way (as we often do) to the point where the Dragon is compared to Satan or the Devil. The Dragon, for those of you who don’t know, lays out the most profound example of a bona-fide nihilist I’ve seen in fiction. Grendel, trying to search for a place in the world, wants the Dragon, in his omniscience, to explain to him the nature of Truth as it interacts with Art. The Dragon explains, as patiently as he can, that it doesn’t matter in the least what Grendel thinks about Art or Truth or anything else. For him the entire universe is:

A swirl in the stream of time. A temporary gathering of bits, a few random dust specks, so to speak – pure metaphor, you understand – then by chance a vast floating cloud of dustspecks, an expanding universe…Complexities: green dust as well as the regular kind. Purple dust. Gold. Additional refinements: sensitive dust, copulating dust, worshipful dust!…Complexity beyond complexity, accident on accident until…Pick an apocalypse, any apocalypse…Such is the end of the flicker of time, the brief, hot fuse of events and ideas set off, accidentally, and snuffed out, accidentally, by man. Not a real ending, of course, nor even a beginning. Mere ripple in Time’s stream.

So, then I ask my students this question: What if the Dragon is lying?

It is all very easy for us to assume nothing really matters. In point of fact, nothing really does, right? We are ripples in time’s stream. We are the copulating dust. This belief, though, gets us nowhere. If we do nothing but find gold and sit on it, what are we, really? If we go out and do evil or do good, we are still doing. We are making an imprint on the face of the universe, no matter how inconsequential. Even the most wicked killer does less for the forces of evil than the deepest, most apathetic nihilist. If nothing really matters, nothing really is worth changing. Without change, there is no motion. Without motion, there is death, bleak, empty, and silent.

To me, that’s a heavy part of true, unutterable evil. The kind common to demons, devils, and the deep abyssal reaches of damnation. No matter how misled, even to believe wrongly is to believe –  we have that much in common, we may yet have more. To not believe is to forsake all but the Void.