← Shoot It or Ride It
Elective Bionics… →

This Christmas, I bought myself a present. I usually feel guilty for doing this, but a friend of mine was selling a few old RPG books and I jumped at the deal. I found myself in possession of Shadowrun’s 4th Edition and a pair of sourcebooks. Not expecting anything awesome, I began to flip around. Then I began to read. Then I began to build characters in my head. And villains. And a campaign hook.

Shadowrun is probably my favorite RPG setting of all time. If you’re running the shadows, I’m there. I’ve GM-ed it a number of times (though never managed to get in a full campaign arc), played it more than any other game, and am pretty much constantly making characters for it in my head. It is a near-perfect mix of cyberpunk dystopian future and urban fantasy. It is a place where trolls and elves and dwarves live in our world alongside everybody else, a place where magic is real and commodified, and a setting so pregnant with adventure hooks they seem to pop off the page and hit you in the face every time you read a sourcebook. Tack that on to a system that is full of crunchy gear and so many cool options that you don’t care if it’s an overall unwieldy monster, and it becomes and instant winner with me (as I tend to like crunchy rule systems). The fact that 4th Edition has ironed out a lot of the ridiculous hoops of the old editions, and we’ve got a game that I almost can’t help but want to run. 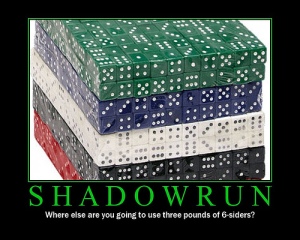 Shadowrun: When else are you going to use three pounds of six-siders?

Me and a friend of mine were reminiscing about the Shadowrun team we’d assembled for another friend’s (Perich’s) Shadowrun campaign from 4-5 years ago or so. Dubbed ‘The Cutler Group’ (for our face man, Everard Cutler), we had a well-balanced, keenly-oiled machine of a team. I was Nikita, the Russian ex-special forces dwarf–the team heavy. I had a van full of guns, connections to Vory Zakon, and a bowling team. I blew up more bad guys than I could conceivably count. Our leaders were Cutler, the face man with the diamond cufflinks and the head full of chips, and Garret, the burned-out Texan mage with his sullen Earth elementals and his warehouse apartment space. We ran with a teenage computer hacker, Milo, an Amerindian street ganger and physical adept named Screaming Eagle, and a host of other occasional stars. Every session was like an episode of Mission:Impossible. Loved every minute of that campaign.

Looking back, that’s been the case for pretty much every Shadowrun campaign I’ve ever been a part of. There was the one I ran with Thurston Derbershaw III, the giant cybered up troll with his host of holographic T-shirts (including one that had a picture of a covered bridge that kept rocking back and forth with the subtitle ‘Trolls Do It Under Bridges”) and Niles, the butler-ninja with the special power to produce beverages at any time. There was the one before that, with the Harley-riding combat mage and the wise-cracking, completely mundane but well-connected Private Eye, Jack Connors. There was the one I played in before that, wherein I played a redneck Ork with a pickup truck, a mean bull-mastiff, and a rack full of hunting rifles. There was the one-shot I played as a ex-corporate assassin with a pair of Colt Manhunters and a Machiavellian code of ethics (helped along with ridiculously fast reflexes).

I could go on.

The point is that it looks like I’m going to run a Shadowrun campaign sometime. I’m in the middle of a Ravenloft campaign right now, so it might be a while, but it’s coming. Oh yes. I just can’t seem to stay away.

← Shoot It or Ride It
Elective Bionics… →