← The ‘Divine’ Presence of Kings
My Top 5 Disney Villains →

But Can Your Phone Love You Back?

I’m currently in the process of discussing Philip K Dick’s novel, Do Androids Dream of Electric Sheep with my Technology in Literature course. In the book (which I highly recommend, by the way), human-like androids infiltrate society, distinguishable from ‘real’ humans only by some slight differences in the bone marrow and in their lack of any kind of empathy. In the novel, Dick is exploring exactly what it means to be human and, furthermore, contemplating the moral status of those things placed outside that definition; the decision to make the androids lack empathy is more an artistic than a technical decision.

I have no opinion about your desire to call me names, no matter how obvious it is that such name-calling is intended to be offensive. Jerk.

Still, Dick is hardly alone in the presentation of robots and androids as being emotionally and emphatically inhibited when compared with humans. Star Trek’s Data, for instance, is constantly on a quest to understand the emotional side of existence as he, himself, is completely lacking in emotion. The Machines of the Terminator universe also lack any kind of empathy, as do the Machines of the Matrix, and any number of other passionless, emotionless iterations of artificial intelligence littering science fiction from here to eternity. We’ve almost come to accept it as a given – robots cannot feel.

But why the hell not?

I’m no computer scientist, so perhaps there’s something I’m missing here, but I don’t really see emotion as anything more complicated than having built-in, default opinions about certain situations and things. They are hardwired programming, basically – you fear the dark because you cannot see what’s going on and suspect something dangerous may be lurking. You fall in love because the object of your affection fulfills a variety of built-in criteria about a romantic mate that are the result of your life experiences, genetic predispositions, and evolutionary history. Emotions may not be fully understood, but it seems silly to consider them some how magical and unable to be duplicated in machine form.

If indeed we could design an artificial intelligence (and, keep in mind, we are a long way from that happening), it seems to me that they would probably develop emotions whether we wanted them to or not. Emotions aren’t just extra baggage we humans carry around to make us miserable; they are useful applications used in order to assist in decision making. That terrible feeling you get when you are dumped or fail a test? That’s emotion chiming in saying ‘what we just experienced was negative; please refrain from repeating the same action’. Are you trying to tell me that any intelligent being wouldn’t be able to do the same thing? 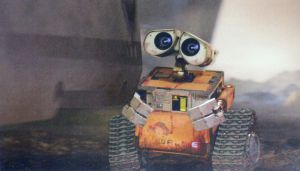 Are you trying to say WALL-E’s love is worthless?

Part of the myth of the solely rational robot is one that says ‘reason > emotion, therefore we don’t need or want emotion’. Our robots (and those who design them) wouldn’t see any need for hardwired emotional content to enable them to make decisions, since their own rational faculties would be more effective at doing the same thing. This, to me, seems to be making a number of assumptions. Firstly, we have never encountered an intelligent creature (at any level) that lacks some kind of emotive response. We have emotions, animals have emotions, so if we’re just going off the available evidence, it seems likely that emotions are some kind of prerequisite to true intelligence in the first place. Even in the development of our own children, emotional response precedes rational response to stimuli. It is perhaps possible that we could do it some other way, but we really can’t be sure. Furthermore, emotion, since it is simpler, is quicker and more effective at making certain kinds of decisions than reason is. If you hear a loud noise, you flinch or duck – this is inherently useful for the survival of a species. Granted, we wouldn’t be constructing AIs so that they could avoid being caught in avalanches, but it stands to reason there would be things we’d want them to be hardwired to do, and emotion is born from such hardwiring. Their emotions might not be the same as ours, but they’d almost certainly have them.

Now, there are a good number of scifi authors who do have emotive AIs – Iain M Banks, in particular, springs to mind, but others as well. Much of my own scifi writing of late has been moving me in that direction: if our AIs will feel, what will they feel about us? How will we feel about them? What kind of emotional relationships can you build with an intelligent toaster or fighter jet?

If your phone can love you back, do you owe it a card on Valentine’s Day?

← The ‘Divine’ Presence of Kings
My Top 5 Disney Villains →