Starship Troopers: You Can’t Always Get What You Want

I read Robert Heinlein’s Starship Troopers when I was in high school. It was cool, but I remember thinking it had way too much political philosophy and not enough action. Then, a couple years later, Hollywood made it into a movie; the ads made it look stupid – no powered suits, for one thing – and I was going to skip it. Word got out, though, that the first teaser for Star Wars: The Phantom Menace was going to be shown before the flick and, in that pre-online video era, that got me to go.

The movie sort of blew my mind. 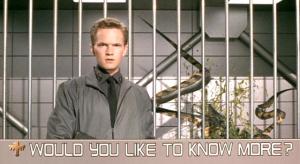 Ah, the wonders of Dougie Himmler…

What Paul Verhoeven had done was make a parody of a fascist propaganda film and nobody but me and a few of my friends watching the movie seemed to notice. I remember it even went over the movie critics’ heads – they saw it was a propaganda film and found it disgusting, failing to recognize what I thought was obvious satire. What was less obvious to me, however, was why Verhoeven would choose that book to make into a fascist satire.

So, back to the book I went. As I read it, my somewhat more astute post-adolescent mind began to notice things about Heinlein’s Terran Federation that seemed…suspicious. One party rule, a glorification of violence, the constant state of war…isn’t that kinda like fascism?

Well, in point of fact, it is like fascism. It’s so much like fascism that, essentially, the differences between Heinlein’s ‘meritocracy’ and Hitler’s Third Reich are relatively few and far between. Now, those that defend the novel against claims of fascism insist that (1) Heinlein didn’t support fascism at all and (2) there doesn’t seem to be anybody in the Terran Federation who objects to it or that we see being mistreated by it (there seems to be freedom of speech, there doesn’t seem to be  Supreme Leader, nobody is getting put into camps, etc.). Both of these claims are, to some extent, true. Neither of them, however, adequately protect the Terran Federation being identified as a kind of fascist utopia and the claims themselves belie a certain misunderstanding in how the process of literary analysis works. Let me take them in turn:

But Heinlein Wasn’t A Fascist!

Here’s the thing – nobody is saying he was. Heinlein was a libertarian; he wanted government out of his life, he wanted people to have the freedom to do what they wanted to do (no matter what), and the rest of it. That fact, however, doesn’t save the society he created from being what it is. You’ve got a world government in which the only voting citizens are those who have gone through a rigorous physical and mental training regimen designed to make them willing to follow the orders of their superiors and to whole-heartedly believe in the mission statement of the society itself. No one who does not go through this process may vote. Everyone, voting or not, must allow their children to be educated by a party member in school, in which they are taught of the importance of violence, of the glory and honor to be afforded those who sacrifice for the State, and about the evils of other societies and races. I could tell you that was written by anyone, and it would still be fascist.

What’s interesting to consider is whether or not Heinlein even knew he was creating a fascist state when he was writing the book. If he wasn’t, what does that say about fascism? It is worth noting that Hitler came to power in Germany during a period almost identical to the period described in Starship Troopers following the war between the Allies and the Chinese Hegemony that destroyed the democracies of the ‘XXth’ century. There was mass starvation, a power vacuum, criminals on the loose, hopelessness. Then (thank God!) a group of war veterans start cracking heads and restoring order and, next thing you knew, everything was peachy again.  Whether it’s Hitler and his browncoats or a bunch of Scottish vets hardly matters – same thing.

But Fascism Is Evil and the Federation Isn’t!

Well, obviously it isn’t. What we’re reading is a fascist propaganda piece. If it’s Heinlein’s objective to sell us on this society he created (which happens to be more-or-less fascist), he isn’t going to spend pages and pages describing to us the times the system broke down. Hell, Heinlein is so sold on his idea, he doesn’t appear to be aware that his system can break down! Sure there’s freedom of speech! Why? Well, because the military allows it to be so. Why would the military restrict speech? But there’s no institutionalized racism, you say? Nonsense – the entire book is a love-story to the Master Race. That master race happens to be ‘Humanity’, so naturally we don’t see why we should object. The Bugs aren’t human, so killing them just to take their stuff isn’t wrong.

The thing is, though, in Nazi Germany, the Jews didn’t count as human either. None of the Arayans seemed to object when they got shipped off, either. When Hitler wanted to go to war with the inferior peoples of the world for the glory of the Reich, it seemed a perfectly reasonable and healthy thing to do. When we have the exact same process, however, in a science fiction setting where the ‘inferior races’ are giant arachnids, though, suddenly it can’t be fascism. It’s a ‘meritocracy’.

Soldiers this pretty can’t be wrong.

But who decides what counts as ‘merit’? Are we going to swallow the whole ‘he who places his body between his loved one’s and war’s desolation’ nonsense? That’s simply Mussolini’s glorification of the hero – you can’t disagree with the Federal Forces because they’re protecting you, you lazy jerk, so just do what they say. Nevermind that their ‘protection’ of you involves wars of aggression with their neighbors. Wars that just happen to self-justify their policies. Policies that only they set, because only they can vote and only they can decide who manages to make it through to earn their franchise.

Sound a bit convenient to you?

This brings me back to Verhoefen’s movie and what blew my mind about it. While I was watching, I thought he was just using Starship Troopers to satirize fascist propaganda. What I didn’t realize at the time, though, is that Starship Troopers is, itself, fascist propaganda, no matter what Heinlein intended it to be. Granted, we don’t actually see or hear of a Supreme Leader (though the Roughneck’s Lieutenant, whose word is as that of God, is a pretty solid stand-in), and the action of the story only has good people doing heroic things for humanity. So does Triumph of the Will, though. We can observe the system as presented and, through simple analysis, recognize the potential for abuse in the real world. We needn’t swallow everything a storyteller tells us on faith – we’re allowed to be skeptical. Once the author puts it out there, the story isn’t his (or hers) anymore, anyway. It’s ours, and sometimes we’d like to know more.