← Writing Updates!
To the Dark Tower →

Author’s Note: What follows is a bit of introductory text for a Shadowrun campaign I just started running. I’m placing it here because (1) I’m pretty proud of it and (2) I’m pressed for time and can’t post anything else just now. I hope you enjoy it! 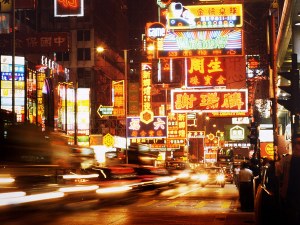 Hong Kong has two seasons: dry and wet. During the dry season, it’s really hot and very humid; during the wet, it is somewhat less hot and, incredibly, even more humid. Monsoons batter the coastal city with driving rains, rains that seem to fall in not just one direction but all directions at once. The water is like human sweat, warm and a bit salty, and there is no escaping it, no dividing your own body from it. The rain covers everything in this town, merging it together in one slimy, sticky, foul-smelling slick.

Walking down the Golden Mile in the Tsim Sha Tsui neighborhood, you can tell the locals from the expat from the tourists by how hard they fight the rain. Tourists wear polymer fiber raincoats and brightly colored umbrellas, sweating and bumping along uncomfortably with the crowds. Expats wear simple ponchos of lightweight plastic and don’t bother to button them, which is still a step above the simple sampan hats of the locals, who take the rain as a gift from the spirit world, even if they don’t particularly like it.

As an ork, you’ve got a good half-meter in height on most people on the street. Ordinarily this gives you a good view of your surroundings, even in a crowd, but it’s night on the Golden Mile in the rainy season, and all you can see is Chinese characters in jarring neon beneath the non-stop spam in your AR displays – tourist shops, noodle stands, sex clubs, and even traditional Chinese apothecaries bombard your senses with ads, some even linked up with your hot sim. If you didn’t have it cut out as a safety measure, you’d smell the noodles and taste the tea while feeling the massages, both chaste and pornographic. Ordinarily you’d be running in private mode in this area, allowing you to see, but Chun Fa has his ways of contacting you, and it often involves enduring the spam for a while. So, you wash down the street with the river of humanity, bathed in the rain, the world nothing but a riot of neon color with the roar of the rain all around and a sea of sampan hats beneath.

It’s only about ten minutes of this before you spot the ad. It’s a picture of a pig on a spit being braised over hot coals with the words “Hot Times!” advertised beneath – no animation, no flair, it’s an ad that nobody would notice or even remember in the neverending sea of Golden Mile spam. You’re looking for it, though, and you know what it means. You duck into the next little cafe and sit at an open table in the back. The place is well lit Japanese sushi place with buzzing fluorescent light and decorated with cheap vinyl faux-wood veneers and imitation paper screens. You recognize the name – some chain called Magic Fish that’s been trying to get a foothold in Hong Kong for the past decade, with moderate success. You’re not really here to eat, anyway, but you order some tea to avoid arousing the suspicion of the dull-eyed teenagers behind the counter. They’ll bring it, but they aren’t rushing. Suits you.

Chun Fa shows up a couple minutes later. He’s a heavyset Chinese man with a face like a dumpling – round, flabby, and glistening as though coated in oil. His hair is a tight little copse of curly black positioned on the very top of his head with the sides shaved away, like he’s maintaining some kind of game preserve up there for whatever could survive in his heavy oiled do. He smiles, making his face undulate into a kind of cheap knock-off of the laughing Buddha. “You look sick. Eat something, my treat.”

“Better than you.” He grabs his belly with both hands and shakes it so it jiggles. “I eat. Hey, got something for you.”

“About time. You’ve been too busy eating and not busy enough getting me work.”

Chun Fa shrugs. “You have no face, my friend. No guanxi. Hard to get you work when most of your work is somewhere else.” You’re about to protest, but he cuts you off. “Please, I mean no offense. Besides, I have something – no small job, either. Big work – pull it off, and you gain a lot of face, make the right connections for even bigger work later. Okay?”

The rest is small talk. After a sensible period, Chun Fa leaves. You stay and wait for Mr. Johnson, who shows up just about the same time as you get your tea. He is thin where Chun Fa is fat, his face is pointed and narrow, like a knife. He is older than you and probably older than Chun Fa, but beyond that it’s hard to place his age. He’s wearing a western suit, which itself means nothing – this guy screams ‘Triad’, but you have no idea which one.

He slides a memory chip across the table to you beneath a napkin and starts talking. “There is a ship that will be docking in Victoria Harbor in three days, called the Aleutian Sunrise. This ship is not to reach the dock.”

A quick shake of the head and a cruel grin is the answer. “You will sink it. In Victoria Harbor, where everyone will see.”

You do your best not to whistle – a tough job, very dangerous, very complicated. “Pay?”

“Ten thousand for a retainer, fifteen upon completion. Plus, we will pay market rate for any cargo you recover from the ship prior to its destruction.”

Cargo – that meant illicit goods, obviously. This wasn’t a ship full of car parts and women’s underwear. These guys – whoever they are – are pretty pissed off at some smugglers and want to make a public example of them. You and your team are the implement of that example, and you’re getting paid peanuts for the privilege. “Okay, Mr. Johnson – let’s talk turkey…”

← Writing Updates!
To the Dark Tower →