← What Explosions Don’t Do
The Union of Stars: A Brief History →

When I was in kindergarten, I got on the wrong school bus home (there were two options – Bus 4 and Bus 6). Normal, right? Okay, when I was 11 years old, I attended a soccer camp. I got a ride there with one of the coaches. After the first day, I saw a lot of kids in my group going home on a school bus, so I got on the school bus to go home. I wound up in a town about 30 miles away from my house. I sat in some other coach’s living room while he called my mother while his kids – all, weirdly enough, wearing baseball uniforms – stared at me. He drove me to the parking lot of a police station halfway between my house and his own, where my Mom was waiting to pick me up.

“What were you thinking?” My mom finally said after a lot of hugging. “You didn’t even get on a bus at all this morning? Where was your head?”

I said I didn’t know. I just saw everybody getting on the bus and went along for the ride. I had not bothered to record the whys or hows for returning home that morning. It just didn’t seem that important to me at the time. 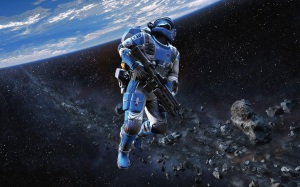 If you’re talking to me, chances are this is where half my brain is.

I spend a significant portion of my time not on planet Earth. I am always (ALWAYS) plotting stories and novels in my head. Often I’m plotting stories and novels I’m never, ever going to write (because who has the time? I’ve got enough projects lined up as it is). While I am writing this now, I am thinking of a story involving hyper-intelligent jellyfish who only communicate with each other in dreams. As of this moment, it has no plot, no characters, just colorful jellyfish floating in space, dreaming to each other and to the (hapless?) explorers who happen to discover them. The other day, while sitting in a faculty meeting, I developed an alien alphabet/language that uses quadrilateral pictograms. I found (to my surprise) that this species has the same word for ‘space’ as it has for ‘sea’. I’m still pondering what that means. It has displaced the jellyfish for the nonce.

And then I’ve still got that story about the guy hunted by aliens on a tidally-locked planet (no rotation) who is reduced to trying to determine his longitude by the size of a cat’s irises. It has a title: “Cat-Nav.”

In any event, this makes it difficult for some people to deal with me. Most notably my parents, but my kids and my wife and some of my friends, too. The other day, my eldest daughter (3 years) was pushing my youngest daughter (6 months) in one of those little walkers with the wheels around my parents’ house while both of them were giggling uncontrollably. It was extremely adorable, but I only paid attention for about half of it because I was deep in the middle of pondering the economic implications of a marsupial aliens species that reproduces in litters of 4-6 just about every 8 months in an interstellar society. Turns out its pretty grim.

I understand the real world is an important place (a stupid thing to say, but there you go). It contains all the things I legitimately love the most – my family, my home, my friends. For whatever reason, though, I can’t stay there all the time. I’m always leaving, going on journeys to places non-existent. There are perhaps a thousand answers why, and the most comforting ones come in some version of the statement ‘this dream has meaning for the waking world.’ Maybe it does. There’s a lot of work between me and finding out if that’s true, and I’m doing it. It’s hard, though – I need to go, but I want to stay. I’m here, but I’m also not. I work for the balance – the magical point where I can be in both places somehow. I haven’t found that yet. In all my travels, that is the destination I have yet to find.

← What Explosions Don’t Do
The Union of Stars: A Brief History →