← The Union of Stars: A Brief History
You Get What You Pay For →

Fun with the Future 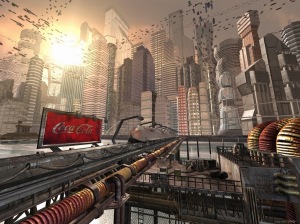 A few days ago, I read this post over on Gizmodo listing five new man-made materials that could ‘change the game’ so to speak. Since that time, I’ve been trying to figure out some of the fun, science-fiction-y applications that could be dreamed up, extrapolating from this material onwards. I have to be honest – I haven’t gotten far. Let’s see what I’ve come up with. Perhaps you have some better ideas:

The first thing that comes to mind is body armor. Today, one of the things that is dangerous to Kevlar users is blunt-force trauma. Sure, the bullet doesn’t go through, but it sure as hell leaves a big, big bruise. Get hit with a thing going fast enough, and it will bust bones, break blood vessels, and can even cause internal bleeding. Having a layer of this stuff would be lighter than wearing a trauma plate (a rigid steel plate placed underneath portions of body armor to prevent that kind of blunt damage) and possibly more flexible. Still, this use isn’t all that fantastic or interesting. While a useful development, it lacks a certain adventurous spirit, doesn’t it?

Replacing bone with porous titanium? Well, not only are we closer to making an actual Wolverine (minus the healing factor, but hey–you can’t have everything), this is the kind of materials science that might even make silly things like giant robots possible. You still wouldn’t need or want them, but still.

But wait! If this makes giant robots easier, why wouldn’t it make *regular* robots easier. Heck, you could get the same material strength for less density – that means lighter tanks, lighter planes, lighter *everything*. Want a vehicle with the speed of a dune buggy but the durable construction of an Abrams? Hello Titanium foam!

This is a cool one. An actual manmade material so light it is legitimately lighter than air. It can also absorb stuff. Besides being used as an anti-chemical agent, you could also saturate it in stuff and produce a way to distribute materials accurately, too. Think of firing pellets suffused with just a *little* bit of compound X that can be delivered to a single person over a long distance. You’d need to couple this thing with something with a little mass (so it would fly true), but it could be a pretty cool gas-pellet device. What about somehow rendering it microscopic and distributing it in the blood. It would absorb oxygenated blood for (potential) storage, giving you something of a back-up supply that could be (potentially) released via nanotechnology somehow–instant energy boost. Or, you know, fill it with adrenaline and see what the hell happens (well, besides a heart attack).

You know those monofilament whips they tote around in cyberpunk stories? Well, a potential reality here. More importantly, couple this stuff with Foam Titanium and grapheme Aerogel and you know what I’m thinking? Space Elevator. Yeah, baby – a tether to a space station that you could climb up via elevator (essentially), making the escape from Earth’s gravity well much, much easier. Oh, and coupling this with aluminum bubble wrap could make some great safety gear.

This stuff is both hilarious and terrifying. Bonding covalently with (whatever) has the potential to create some really interesting pranks as well as some horrifying crimes. That said, I imagine this has some significant future in both the medical and mechanics fields. Being able to glue back on a lost fender without worrying about it falling off is pretty cool. Being able to stitch people up without stitches is also pretty awesome. Couple with graphene aerogel and consider this:

You get shot. Doctors x-ray to determine size/location of bullet. They fill a small pellet of graphene aerogel with just the right amount of solvent and press it against the bullet. The bullet dissolves into a (presumably) inert substance (imagine super-chemistry here). They then pull out the pellet and glue you up with molecular glue. You take it easy for a few weeks to heal, but no scar, no bullet, no muss, no fuss. Cool right?

Of course, none of this is as-of-yet possible. Part of the scifi writer’s job, though, is to imagine potential even where it seems impossible. What about you guys? Any ideas for this stuff?

← The Union of Stars: A Brief History
You Get What You Pay For →