← The Rule of Cool (or “How the Jaeger Program Happened”)
Flying Cavalry: A Tactical Guide → 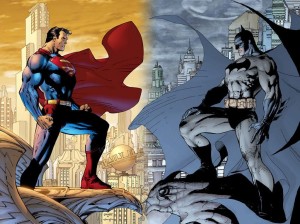 Everybody knows the answer is ‘Batman’. If it weren’t the answer, geeks would have to concede that brawn beats brains.

The comic book store argument is a staple of the geek subculture. You’ve seen it on The Big Bang Theory dozens of times: Sheldon, Raj, Howard, and Leonard sitting around their living room, arguing until they’re blue in the face over whether Thor’s Hammer can penetrate Cap’s Shield, or what the difference is (or ought to be) between zombies and mummies. As much as I gripe sometimes of the stereotyping of geekdom by that show, I do have to admit in that one respect they are generally spot-on. It is a thing. It happens all the time.

But what is the point? They aren’t real, so why bother?

Why do I bother critiquing things like zombies, giant robots, and mermaids? As one (unusually offended) commenter asked:

Do you go around telling kids there’s no Santa Clause [sic], too?

Let’s ignore the spelling error for a moment and take for granted that the commenter in question is not referring to the Tim Allen film franchise, both loved and admired by all humanity (he gets fat by magic – comedy gold!). Let’s engage the essence of the critique here: why ruin all the fun? It’s a worthwhile question, and it does deserve an answer.

Geeks have these conversations because they are fun. They are fun in the same way that analyzing literature is fun, or critiquing the fashion choices on the red carpet is fun, or really any act where you pass judgment on something is fun. It isn’t just geeks who do this – we all do this. Having opinions and backing them up with arguments is part of the deal with being able to think. Can such arguments go off the rails? Sure they can. Conflicting opinions can often be confused with personal rancor, feelings can get hurt, and all enjoyment can get sucked away by some guy crossing the line. Most of the time, though, this doesn’t happen.

Part of what makes these geek conversations unique is the fact that their subject matter is often entirely fictional. There is no empirical definition for the weight of Thor’s Hammer, only what can be inferred by circumstance. I once had an argument with a guy about how lightsaber duels weren’t reflective of what a duel with a plasma sword would really look like. My critique was oriented around the supposition that the plasma wouldn’t have the same mass that the sabers seemed to when fighting – less mass means less inertia, which means a whole different set of fighting techniques become possible, thus changing the duel. His argument was that we had no way of knowing how densely packed the plasma was in the blade, therefore it may have the same mass as a lightweight sword of the same length. I came back by citing the conservation of mass – if the plasma had that much mass, where did it go when the blade retracted? Lightsaber hilts do not get visibly heavier when shut off, therefore…

You get the idea.

These conversations are often fun. They ask us to think and analyze what we observe and to draw conclusions from it. This is how human beings learn. This is how we adapt and change. If nobody asked such questions, nothing new would happen. Now, granted, science fiction and fantasy franchises aren’t the most important thing in the world to debate, but to equate critiquing their conventions with ruining Santa Claus for little kids is unfair. For one thing, that implies that scifi/fantasy is only for children, which I object to in the most strenuous terms possible (I mean, have you even read Freud or Jung?). For another, that suggests that we are having this conversation for the express purpose of ruining something for someone else. Not true. We’re trying to change it, in our small way. We’re trying to say it can be better. We try not to have these arguments with people who don’t care or don’t want to hear them (at least the more socially facile of us do) – the last thing a geek really wants to do is ruin somebody’s fun. If you like the old thing, well fine – opinions differ. If you have such a problem with my disagreement, offer me a robust defense. Debate it.

It should be fun.

← The Rule of Cool (or “How the Jaeger Program Happened”)
Flying Cavalry: A Tactical Guide →