← Sherlock, Dexter, and the Cult of the Broken Man
On Competition →

It all starts in a tavern. All pointless stories start there, since that is the place we can easiest imagine meeting others and doing something interesting, despite the fact that meeting in taverns rarely leads to anything more interesting than intoxication. There’s an elf and a dwarf, and let’s say an orc. Or ork – whichever. Everybody’s drinking ale (which is more interesting than beer) and the barmaid has an irresponsibly plunging neckline. Let’s presume she works for tips.

This is the point in the story where somebody runs in from outside, breathless and bloody. Or where some loud-mouth starts spouting off about ‘the only good orc is a dead orc’ or whatever. Perhaps some lunk gets handsy with the barmaid. Maybe somebody mysterious posts a note on the bulletin board. It says the following:

Meet the Creepy Stranger in the Inexplicably Empty Back Room

Maybe all of these things happen. The point is this: what happens next is a bar fight.

Why? Evidently such things are fun. 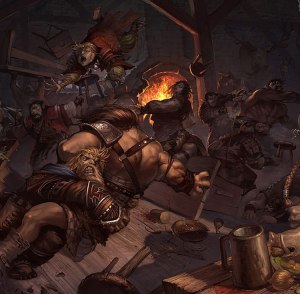 Heroic music plays, as is fitting for acts of criminal vandalism and assault. The fight rages on, and heroes emerge. Why are they heroes? Well, they’re winning the fight, of course. They find in each other a ready ally, a surprise to no one save themselves. Maybe, at the end of all this, they rescue a princess in disguise (she was slumming it, you know. Why drink in the palace when there’s a perfectly good dive down the road where you might get assaulted by a dwarf?). Whatever happens, the drunk under the table never notices; he rises, alone, and is delighted to find free beer.

So begins a tale of adventure. High drama. Endless banter. Derring do on every other page. Maybe, by the end, the elf and the dwarf and the orc become friends. A little tear forms in the corner of our eye, but we refuse to ever acknowledge its existence. The tear is undercover, you see. Top Secret. Hush-hush.

I bet you were rolling your eyes up there. Chuckling, perhaps? Sure, and why not – the cliché is so banal, it’s comedy. Then again, though, there’s something to be said for mindless fun. I recently read an article by Adam Sternbergh in the NYT magazine considering the worth of so-called ‘guilty pleasures’. I enjoyed it immensely and enjoin you to read it.

Why do we feel so bad about liking things considered low-brow? I mean, isn’t it okay to have fun – even dumb fun – on occasion? Must everything be so deep and serious all the time? I confess to feeling the pressure myself. As an academic (or pseudo-academic, given that my terminal degree is not a PhD but rather an MFA), there is a certain pressure to make what I write and what I enjoy somehow important. Not all of it is, though, no matter what I do to it. When I confess to liking Armageddon or Army of Darkness, there isn’t much that can be said to give such works merit. Likewise my hobbies: despite its sophistication, there is nothing truly artistically redeeming about Warhammer 40, 000 unless you put far more effort into painting miniatures than I do. And even then it’s suspect.

So what, though? I think sometimes we spend too much time decrying the frivolous, forgetting just how important frivolity can be. As much as being serious adults is important, it isn’t the only game in town. We also need to have fun. We also need to do things that are easy. All work and no play makes Homer…something…something…

Right then – let’s go to the tavern. I’ll buy you an ale. Later, when we’re riding dragons to save the King of Thumbershire from the Daemon Princess of Xoon, you’ll thank me. Dwarf’s honor.

← Sherlock, Dexter, and the Cult of the Broken Man
On Competition →