What About True Love?

I saw Frozen at last over the weekend. It definitely stands as one of the best Disney animated features all time (though arguably not the best, I’ll grant, even if it is in the running) and is certain the best since The Princess and the Frog, easily eclipsing Tangled and whatever else slipped in there beneath my notice. What I found interesting about Frozen is, I feel, nothing different that what a lot of us found interesting about it: in the first place, a fantastic score and soundtrack, and in the second, an actually complicated and nuanced approach to the concept of ‘love’ – something that fairy tale style movies have almost never done. I feel this is important, since trying to show children that love is a simple concept is both erroneous and potentially hazardous to their emotional development. Nowhere is this more keenly observable than in the scores and scores of emotionally damaged adults who proceeded into the stormy waters of “true love” with all the same innocence that Anna does in the film.

I am no expert on love. I would say that, possibly, no such expert exists, but then again I’m no expert, so what do I know? All that said, what I can say about love is that it is a dangerous and complicated thing, not to mention elusive. When you think you have it, you often don’t. When you do have it, you often fail to realize this until it’s gone. Then, for those lucky few of us who get it, have it, and hold on to it, you are still constantly in doubt about it; you’re waiting for the other shoe to drop or, perhaps, wondering why it is constantly changing if this is the Real Thing. 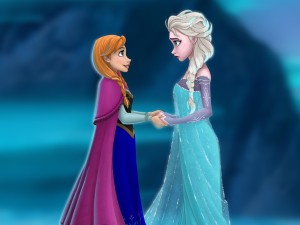 “Do You Want to Build a Snowman” is a LOVE SONG, folks.

Frozen cleverly illustrates this problem by constantly moving the goal-posts for Anna. Is she in love with Prince Hans? Kristoph? Well…no. Not yet, anyway. Obviously she loves her sister, Elsa. We take that as a given in the story; despite the fact that it is the central conflict of the film and the only thing in the movie of any permanence, we instinctually allow it to play second fiddle in our hearts to the good ol’ Princess and Prince falling instantly in True Love. We, like Anna, miss the good thing right in front of her in favor of the flashy new thing that gets waved under her nose. This is a grand metaphor for love itself – so easily missed and overwhelmed by simple infatuation.

A few years back I had a student submit to me an argument essay claiming that love didn’t exist – it was a myth and a fairytale. Love, she said, was simply chemical stimulation in the brain responding to basic physical attraction that was essentially unsustainable. You can’t be really in love, she claimed, as sooner or later you would come down from your ‘high’ and, therefore, no longer love that person. I pointed out to her that her perspective better demonstrated a misunderstanding of what comprises ‘true love’ than it did disprove its existence entirely. I asked her how she then described the love between parent and child, between siblings, and between those couples who have stayed together for decades. She equivocated. I didn’t press the issue; an 18-year old girl is entitled to be disenchanted with love if she wishes.

What the student had done was mistake eros for philia – the passionate desire for another for the loving respect and admiration of them (read up on the Greek definitions here). In principle, eros and philia combine to make what we call true, romantic love. We both desire our partner (considering him or her ‘ideally beautiful’ in the philosophical sense) and respect and care for them and their well-being (as we admire and are fond of them). Without some sense of both eros and philia, we can’t be said to be in Romantic Love. Among the sisters in Frozen, philia is the operative form of love at play and the movie (correctly, I feel) places greater emphasis on that than it does eros. Philia is the love that transcends time and self. It is the meal; eros is the spice.

To say that eros is superior to philia is to be completely blinded by the fairy tale mystique. Yes, being head-over-heels infatuated with someone is an incredible, almost indescribable feeling, but it’s a phase. Spend your life looking for it to perpetuate ad infinitum and you will get yourself in the wrong state of mind. Obviously we should desire our partners, but the person who truly loves you is not the one that you spend half an hour challenging to hang up while making googly noises on the phone. It’s the one who holds your hair out of your face while you throw up, the person who makes sure you make it home on time,  the person who can’t wait to listen to your stories and laugh at your jokes.

To love another is to put yourself at their mercy – your desire and respect for them means their approval of you is of utmost importance. To be loved is to be at someone’s mercy and have that someone always grant it. It is to be infinitely exploitable yet never exploited. It is trust and friendship and (yes) desire. You don’t find it on every corner, and it doesn’t show up all at once; even the fastest love affairs have to grow into themselves before they’re mature and ready for the world. For this reason I love Frozen because it has the courage to tell us that Kristoph and Anna are not yet destined for one another but that Elsa and Anna already are.