← The Sword and Laser Anthology is Out!
The Breaking of Fellowship →

Fly Me to the Moon

Do you remember a time when you believed there were people living on the moon? Or Mars? Or Venus? I do.

I’m a kid – no older than eight – reading Ray Bradbury in a sunny room, thinking about the color of the kids’ raincoats on Venus. A casual browse through my shelves will reveal reams of construction paper upon which has been illustrated a wide variety of spaceships, including the Costello – an interplanetary craft based upon the rough outline of the swing set in my backyard. On the floor, scattered about on their launch pads, a legion of Lego spaceships point through the skylights of my bedroom, waiting for lift-off.

This is me before true scientific understanding had dawned. Before I had my subscription to Odyssey, before I learned everything I could about the Solar System and beyond. This was when I still thought there might be Martians and wondered whether they were friendly or not. 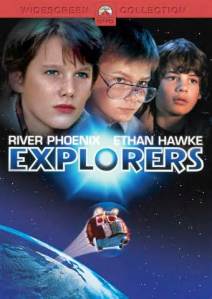 Guess which one grew up to be Ethan Hawke.

Explorers was released in 1985. I did not see it in the theater – I didn’t know it existed until probably a few years later, when I was browsing through the local video rental store (remember browsing the rental store? Man, I loved that!) and saw it sitting on the shelf. The movie was, along with The Goonies, a representation of all my idealized childhood fantasies. A couple kids manage to build a spaceship out of junk in their backyard and fly off to explore the universe. Never mind how they did it (I don’t really remember – something about a computer program that makes bubbles out of thin air, I guess – this was also back in the days when computers were tantamount to MAGIC). The important point is that three kids, without the need for adults, built a spaceship and went off to explore space.

List off the films that did this in the 1980s – had kids/teens on the forefront of space exploration/science fictional adventure:

I’m probably missing some, too. In any case, I grew up thinking fantastic adventure was just around the corner. All I needed to do was meet a crazy inventor or stumble upon a meteorite or get locked in the National Air and Space museum after dark and discover, to my shock and wonder, that the Apollo Capsule still worked!

And when I did manage to travel through time or open a portal to another world or fly off to Mars, there would be people there. Life, in this halcyon age of my imagination, was as common in space as it was here on Earth. Every planet would have a secret ecosystem of aliens creatures waiting to be explored and (possibly) zapped with a ray gun. There would be cultures of intelligent creatures there, both primitive and advanced, and I would make friends and enemies, establish diplomatic relations, and so on. I swore I’d have a flying car by now and that space stations would be places people went for vacation or stopped over on their way to Saturn.

I was wrong, of course. Space isn’t really like that or, at least, it doesn’t appear to be. It is vast and mostly empty and our planet is a little island of blue all alone in a sea of black, not just one member of an archipelago of habitable worlds. Getting off this rock seems harder and harder, even as it also looks to be more and more essential that we manage it. I wonder if this is just part of growing up for everybody or whether my generation was uniquely spoiled –  probably the former. I also wonder: do the kids of today have similar dreams? Do they hope to explore the Great Unknown? I worry sometimes. I seem to meet a lot of young people who don’t bother looking past the ends of their noses and whose ideas of the future involve merely a steady job and a 401K (if that).

That’s not enough, though. We need to look further than the necessities of our own survival. We need to be dreamers – crazy dreamers – if we’re going to have a shot. When somebody accuses of you of riding moonbeams, you need to take it as a compliment. It’s gotta be better than just squatting in the dirt, right?

← The Sword and Laser Anthology is Out!
The Breaking of Fellowship →