Hunting for the Happy End

I do not follow and am not interested in the World Cup. If the US wins the World Cup, I will not go to any parade unless, perchance, I feel like attending a parade for the inherent enjoyment of the activity itself. Truth be told, the older I get, the more detached I become from professional sports in general. Once a rabid Red Sox fan, I now follow them only casually – I tune in after the All-Star break, when I see their chances of making the playoffs and am interested in the outcome. I have always been loosely interested in American football, but not so much that the ups and downs of that particular sport affect me in any emotional way. I won’t watch the NHL (snore – seriously, if you like hockey, watch college hockey), and I find basketball interminably dull.

I do not, however, begrudge people their enjoyment of sports (well, so long as that enjoyment doesn’t lead to violence, excessive body-painting, or bouts of alcoholism and depression). If there’s one things sports do well, it is create self-contained narratives of success or failure. You tune in to watch the game, you assign moral (or at least aesthetic) values to each team, and then you watch them play through a rigid structure that produces a victor and a loser or, less often, a draw between equals. Voila – closure! 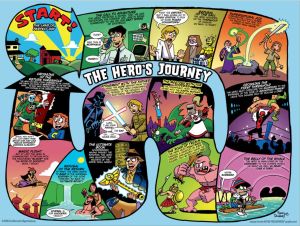 The hero’s journey in a nutshell.

The quest for narrative closer runs deep in our species. Joseph Campbell explored this with his monomyth, wherein he laid out the basic framework for what we call ‘the Hero’s Journey’. In brief, a protagonist leaves the normal or mundane world after being called to adventure by (X) and crosses into the magical or spiritual world of adventure, wherein they have adventures and, eventually, experience some ordeal (Y) in which wisdom or power is gained. They then return to the regular world a changed person. There’s a lot more floating around in there, but that’s the gist of it all. It lays out the basic format for every story from Gilgamesh to 95% of everything Hollywood has produced since it has been making movies. It is the basic framework under which we understand ‘story’ and what that word means. This is especially true in the speculative genres, where the Hero’s Journey is practically sacrosanct, thanks in large part to the provenance of stories like Star Wars and Conan the Barbarian.

The world, of course, and real life do not adhere to this framework at all. Our world just keeps going. You win one day, you lose the next day, and in a million million years, nothing you do will have mattered at all, anyway. Nothing. In John Gardner’s Grendel (itself a heroic journey, by the way), Grendel comes to the Dragon in search of meaning. The Dragon isn’t having it, though. He says:

“Things come and go,” he said, “That’s the gist of it. In a billion billion billion years, everything will have come and gone several times, in various forms. Even I will be gone. A certain man will absurdly kill me. A terrible pity – conservationists will howl.” He chuckled. “Meaningless, however. These jugs and pebbles, everything, these will go too. Poof! Boobies, hemorrhoids, boils, slaver…” (Gardner, chapter 5)

The dragons’ view is inherently nihilistic and depressing. There can be no purpose, he claims, because in the end nothing will change. The natural world affords no special exception to the diligent or beautiful or brilliant or wicked – dust to dust, ashes to ashes, etc.. To quote the Warhammer 40,000 universe:

Forget the promise of progress and understanding, for there is no peace amongst the stars, only an eternity of carnage and slaughter, and the laughter of thirsting gods.

But the universe is a big place and, whatever happens, you will not be missed. …

In end, after it is all said and done, the universe will die either a cold death or a hot one, and we (assuming we still exist, which is rather arrogant of us to assume) will go with it.

We needn’t be so morose, however, to acknowledge the importance of closure to our narrative consciousness. We like to know how the story ends. We prefer the story to end on a good note, as it confirms our judgments in the beginning of the story as sound. We will tolerate an ending that is dark and miserable if, by experiencing it, we feel somehow enriched. What we don’t like is the gradual dwindling and diminishment of a tale. We don’t like it if a story ‘stops’ before it is over, since the stopping point is essential to us. It is where we stop and take stock of what we have learned from a conceptually distinct set of experiences. We willingly place arbitrary borders in the stories of our own lives in order to make sense of them, even though life and experience does not respect those borders. We expect the same of our stories – we want to know how it ends, so we can then judge that ending.

And so that brings us back to sports. Yes, somebody will win the World Cup. That isn’t closure, though – next time around, that team will lose. The players on the winning team right now will continue to exist, living their lives with all the swings and swells of fortune to navigate. It won’t be over. Nothing ever really ends, you see. We just want it to and, more importantly, we want it to end at the moment of our choosing.