The Last Revenge of One-Eyed Willie

The common image of the famed pirate Wilfredo Guzman, or “One-Eyed Willie”, is that of a ruthless and cunning buccaneer, defying the English fleet and amassing a grand fortune only to be discovered centuries later in the caves near Astoria, Oregon. What history tells us about the man, however, paints a significantly different picture. As Willy’s ship, Inferno, flees up the California coast in 1632, pursued by a Spanish (not English) fleet sent to capture him, we come to understand that this fearsome pirate was a desperate man on the run and just barely in control of his crew. The acts that resulted in his death, made so famous by their sheer perversity, merely underscore this fact. 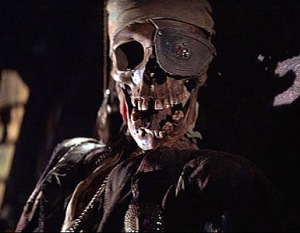 To understand Wilfredo Guzman, one also has to understand the Spain of the early 17th century. Despite the wealth of silver and gold crossing the Atlantic into royal coffers, Spain was a nation in significant debt, having taken on significant loans to pursue wars against both the English and Dutch. Though the Thirty Years War (1618-1648) bolstered Spanish confidence in their armies, the Castilian economy essentially collapsed under the weight of its debt in 1627. Many portions of the army (and navy) were forced to pay themselves, as tax collection was fruitless and the Spanish armies too far flung.

Here, we can see where Guzman fits. A Spanish naval officer by diction and evident training, he likely found himself without the means to maintain his ship or pay for his crew. Accordingly, driven by a bitterness that we can only speculate upon, he and his ship went rogue, turned to piracy, and began to raid Spain’s own treasure fleets. As has been extracted from Guzman’s own log, he was “taking his due” – payment for service that he had given the crown, but that the crown had refused to pay for.

Spanish captains in the 17th century possessed top secret knowledge, very much akin to naval captains of today. In the 17th century, before the development of longitude and good maps, crossing the Pacific Ocean could be a suicidal venture. The Spanish had discovered the ideal latitude for crossing the ocean without starving to death, and this latitude was a state secret entrusted only to its naval captains. This, along with working knowledge of how Spanish treasure fleets operated, their common routes, and the rest of it, was the primary factor in “One-Eyed Willy’s” success. He was a threat to the Spanish crown unlike any other – one of their own, turned against them – so it is hardly surprising that Phillip IV commissioned a fleet of five ships of the line to hunt Guzman down.

Guzman’s own log records how they finally caught him. Taking on stores in California prior to heading west to raid in the Philippines, the five Spanish vessels found Guzman and Inferno unprepared for a fight. That they escaped prior to being caught and destroyed at anchor is a testament to Guzman’s crew, but without sufficient stores to cross the Pacific and the Spanish approaching from the south, his direction of flight was clear – north, along the coast. He had to know where it would all end, as did his crew.

Any study of piracy during its heyday in the 17th and early 18th centuries shows how precarious it was to be a captain of a vessel of cutthroats and thieves. While Guzman may have begun his pirate adventures with a crew of loyal Spanish sailors, by 1632 the dynamic had changed. Loyal, God-fearing Spanish subjects had been largely replaced with the kind of mercenaries and reavers suited to this lifestyle. If Guzman set sail with a crew of loyal subjects, he now found himself the master of a crew of jackals. What’s more, Guzman was notoriously stingy with Spanish gold and silver, stating in his log that “I cannot bear to see this coin spent by so lowly an example of men as God has seen fit to inflict upon the Earth.” It may be that Guzman was hording the wealth scored from Spanish galleons for some grander purpose – perhaps even as a means of buying his way back into the good graces of the King – but his crew knew he was holding out on them, and they weren’t happy about it. At the prospect of facing a hopeless flight north, one can imagine their enthusiasm for Guzman and his leadership waned even further.

It was probably a demand of the crew, then, that Guzman attempt to take shelter in the cave near Astoria. It was a desperate tactic, to be sure – akin to backing oneself into an alley and pointing your lone gun at the entrance. Due to the comparatively shallow draft of Inferno, only it could negotiate the waters near the inlet, so any bombardment from the Spanish would have to be conducted over long range and Guzman’s crew, being the better gunners, might have stood a chance of outshooting them. There was an even better chance, of course, of the Spanish failing to see them at all and merely passing by. Again, Guzman’s log explains how it all came to pass:

No sooner have we dropped anchor than some portion of the men decide to abandon ship. Led by Marstrom and Diego. I will not permit the boats to be lowered, not in the face of the enemy who, even now, was less than a mile distant on the other side of the point. That fool Diego took a shot at me. Killed him and the rest, but it was too late. The report must have been heard by the Spanish. They came to finish us.

The Spanish, seeing Willie holed up in a cave on a distant and savage shore, saw a better solution than sinking the Inferno. They merely blew up the cave, collapsing it on top of him, and left him for dead.

Fate, though, had spared the ship actual damage. Guzman and his mutinous crew were simply trapped. This is where the legend really takes off. Long has it been supposed that One-Eyed Willy and his crew spent years thusly entombed, burrowing like moles in the earth. This, however, seems unlikely given the state of their provision and the onset of winter a few months after their capture. Likely, the actual story is more compact. The natural cave systems surrounding ‘Willie’s Inlet’ would have already been intact and escape would have been a mere matter of exploration and the occasional application of gunpowder (a substance they had no lack of). But even when gaining the surface, where to then? Orgeon was well beyond any European settlement or trading post. Guzman and his crew faced a wilderness full of savages and wild animals as well as a cold northwestern winter. They had no ship to escape with and very little likelihood of encountering any such ship in the near future. They were marooned, as surely as if they had been left on a desert island.

It was in the name of defense that Guzman convinced his crew to construct the elaborate series of booby traps that protected the way to his ship. Someone aboard – possibly Guzman, but more likely one of his more trustworthy officers – was an engineer by training, and so the great work began, probably taking some months and probably lasting through the winter. Exposure, disease, and starvation probably took its share of the crew, which likely suited Guzman just fine, as his plan was never survival. He writes in his log that he would rather die than be reduced to living ‘in a hut with savages’ and swears that he would ‘sail once more’. This, incidentally, was Guzman’s last entry in his log, dated in late March, 1633.

By this point, the map had been made, the key fashioned, and they had been allowed to escape from the tunnels of the pirates – and on purpose, mind you. Guzman wanted to be found, and nowhere is this more evident than in the quality of the map itself – a map drawn not in the scratchy hand of a buccaneer, but in the careful, meticulous detail of a naval officer. It included sounding depths of the surrounding waters, a near perfect representation of the Astoria coastline, and all the other indications that it was Guzman’s map to a treasure that he had no need to find himself, as he lived with it.

The winter must have made it clear to Guzman that he would never sail Inferno under his own direction again. Too many crew had either died or abandoned him and, very likely, the last few tried to make off with the treasure, and so Guzman and his inner circle killed them all. It is they that were found in the captain’s cabin, gathered around the table, piled with gold. These last vestiges of Spanish nobility, possibly his lieutenants from his naval days. Analysis of the cups on the table implies they may have drank poison together – one last drink. One wonders what they discussed. They must have been aware of Guzman’s plan at that point – his final laugh in the face of his royal Spanish enemies.

That final slap of defiance, however, seems to have come far later than Guzman probably suspected. It was not until 1985 that a few of my friends and I finally gave Willy that moment he wanted: the Inferno sailing out from its supposed tomb, proud and beautiful, in defiance of a Spanish king now several centuries dead.