← The Fifth Element Should Be Boron
Alandar: A Timeline of Events → 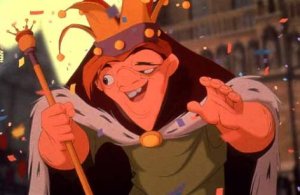 Clearly it is topsy-turvy day.

No, this post isn’t about The Black Cauldron. That wasn’t a good movie, it just had a magic sword and skeletons and we saw it when we were seven or eight years old. No, rather this post is going to be about what I consider to be one of Disney’s most underrated animated features, The Hunchback of Notre Dame. I figure if I’m going to rant about overrated movies (see previous post), I may as well mix in some positivity, too, and keep the tone even.

Anyway, nobody saw Hunchback, and it’s something of a shame. While I’m not here to claim that it is the best Disney feature ever (and it certainly isn’t quite that), I am going to defend it as being a very good or, at least, a notable and ambitious one. Because it is all those things, you see – notable, ambitious, and very good.

People who hate this movie love to harp on the fact that it ‘tromps all over Victory Hugo’. This accusation, if stripped of all vitriol, is strictly accurate – the film changes the story significantly to fit its purpose. Most notably, the ending is not a tragic one. However, Disney isn’t really telling the same story Hugo is, anyway, and tragedy is never their aim here. Hunchback is a story about accepting and embracing difference and diversity, and that it does. Indeed, I’d say it does a better job with its central theme than The Lion King does with its own (adolescence and maturity) and, indeed, I would go further to say that the Lion King would be the movie better suited to a tragic end. That, though, is an argument for a different post.

Even beyond the lament that this two hour movie does not manage to encapsulate a 500 page French romantic novel, the other problem is that the movie seems to shift in tone rapidly. On the one hand, you have themes of genocide, lust, inhuman cruelty, and isolation and then, on the other, you’ve got wisecracking gargoyles and pithy dialogue from Kevin Klein. The shift is jarring and sometimes too much. I would argue, though, that this particular critique is not in any way unique to this particular Disney film, but rather present in all of them. The only difference is that the themes most other Disney films attempt to tackle are significantly less intense and, therefore, the juxtaposition is less obviously obnoxious. For example, Mushu (of Mulan) is every bit as idiotic as the gargoyles, as is Timon and Poomba (The Lion King), as is Jacques and Gus (Cinderella), as is the little hummingbird and racoon in Pocahontas. They are silly comic relief and, while they are often better managed than in Hunchback, I’d argue not substantially so. It’s just that we have trouble accepting that people might tell lame jokes while some lunatic judge is burning people alive inside their homes.

I would argue that Disney’s primary problem with this film is that they didn’t go far enough, honestly. They wussed out on telling a really, really powerful story for fear of terrifying children. This is a sensible fear, I suppose, but I think that Disney underestimates children (and always has). I think they could have cut the silly gargoyles and made an even better movie. All that said, the movie they did make is a fairly impressive work, especially considering the strictures under which Disney movies are forced to operate. 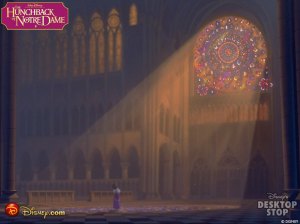 The movie is *also* pretty to look at.

As adults, we are aware that the world is full of horrible things happening to innocent people for horrible reasons (I gesture vaguely in the direction of the Middle East). We live in a world full of hatred, fear, bigotry, and violence. Few Disney movies have ever bothered addressing this or, if they do, they have cleaned it up and dumbed it down to the point where the message is empty and meaningless, made to play poor second fiddle to some uninspired love story. Hunchback doesn’t do this. Its violence is unapologetic; its villains are not just evil, but realistically evil. This film explores racism better than Pocahontas, explores the evils of patriarchy better than Mulan, and has a main character who copes with his own self-loathing far more convincingly than Simba in The Lion King.

I’m not going to give a synopsis here, but I will mention a few points of note: 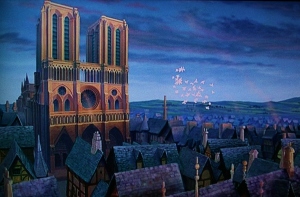 Beyond that, the film is beautiful. The animation is spectacular and contributes to the themes. In the opening number, the cathedral of Notre Dame is presented as a character, and the imagery that surrounds it supports its role as central moral axis of the film. Now, in the absence of any other substance, this might fall flat. However, the cathedral and medieval Paris serves as an excellent backdrop to the difficult themes already discussed and the filmmakers know this, and they use it. When Frollo trembles before “the eyes, the very eyes of Notre Dame”, the effect is heart-stopping. We simultaneously are given a glorious musical and visual image, but also gain greater insight into Frollo’s character – a man living in terror of his own dark soul. At the end, when boiling lead (or oil, but I assume lead, since that would make more sense) is pouring from the rainspouts of the cathedral, the religious imagery and themes of the film could not be more clear or more harrowing.

The music, likewise, is sophisticated and interesting (well, mostly – a couple songs are just there to be happy, and I refer you to the tone problems the movie has as described above). “God Bless the Outcasts” and “The Bells of Notre Dame” are particularly good.

Phoebus and Esmerelda are pretty stock characters, I will agree. Esmerelda is the more interesting of the two and has better lines, but she’s still just the ‘feisty gypsy woman’ for all that, and Demi Moore’s dialogue delivery is a bit wooden. That, though, is more than made up for by the protagonist and antagonist of the film, Quasi and Frollo. Quasi is very well drawn and his gradual climb to self-confidence is inspiring to watch, primarily because he doesn’t realize he’s doing it until the end which, to my mind, is how most of us change anyway – without self awareness or that crystal clear moment of epiphany. Then there’s Frollo. He’s a simply fantastic villain, and no mistake. Evil, twisted, and actually understandable. History is full of his analogues – a man so convinced of his self-righteousness that he becomes a monster and, even as he realizes it, cannot and will not do anything to change. He prays for help but asks for the wrong things. He is a victim of his own bigotry and lust, and this only makes him more evil. He’s great fun to watch, even as he makes your skin crawl.

The idea is often advanced that this stuff is too much for children – that they can’t, won’t, or shouldn’t understand it at their age. I think that idea is wrong. Children can watch this movie and understand enough – Frollo is cruel and evil while Quasimodo is good and kind. The heroes in this film treat everybody (even Gypsies) kindly and believe everybody deserves the same chance. Does this miss a lot of the overtones and deeper themes? Yes, of course, but so what? It is enough for them  to see it and maybe, just maybe, set some seeds in their mind that grow into the kind of things we want our kids to be: even-handed, just, inclusive, and merciful.

← The Fifth Element Should Be Boron
Alandar: A Timeline of Events →