Congratulations on your new command, Captain! Now, before you begin your sojourn through the cosmos, there are some things you need to know that haven’t been covered in your Starfleet manuals and likely haven’t come up prior to this time. Below is the collected wisdom of captains like yourselves, who have experienced the Final Frontier enough to know how it all works. Read carefully – this might save your life someday. 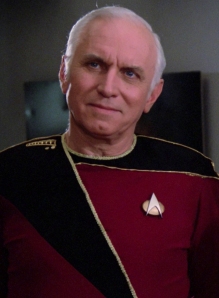 Take it from me – I became a giant bug!

Directive One: Have a Safe Word

One you become captain, at some point you are going to be replaced by an impostor. Just get used to the idea – it’s gonna happen. The hyper-intelligent gas cloud, alien hologram, or curious Q or whatever will likely be very familiar with your mannerisms and will pull off a charade just convincing enough to prevent being removed from command immediately.

To prevent this kind of thing, just verbally inform your crew of a password (like “potato salad with crotons”) to be uttered to confirm your identity. Make no record of this password in any manual, message, or database. If you have an android on board, don’t tell them. This way, the only way you (or one of your senior staff) can be replaced is by those creatures that can read minds and assimilate memories. This ought to cut down on the rate of impostors by a good 65%.

I know, I know – crew morale. We’ve all been there, believe me. Take it from us, though: it just isn’t worth it. You should see the reports on this stuff. On simply ships called ‘Enterprise’ alone, there have been dozens of nearly catastrophic incidents related to the holodeck. It takes over the ship regularly, it threatens crew-member’s lives, and it can lock up senior staff for hours on end while they have to figure out the Murder on the Orient Express for the billionth time.

Just get rid of the thing and install a rec room. A pool table, some Ping-Pong, a bunch of board games, and so on. Keep a replicator around to make any and all recreational objects whatever alien needs for his/her/its version of alien foosball, but that’s it. No ship in the history of the Federation has ever been threatened by a Foosball table.

If your engineer or security chief or Ops officer or whoever mentions to you that they’re getting some ‘odd energy readings’ or ‘a minor systems fluctuation’, we recommend immediately going to yellow alert. Why? Well, probably because an energy alien has just sneaked aboard your ship, or one of your crewmembers has become a robot, or you just entered an alternate timeline, or whatever. It’s always bad, but it wouldn’t be as bad if you guys didn’t spend the next three hours sitting around on your beige couches staring at the view-screen. Get ahead of that shit!

If you meet a future version of yourself, a future version of your ship, or a person who is clearly from the future, believe what they say. Why? Because they’re from the damned future, that’s why! If you went back in time and told some idiot in the 20th century to avoid buying a Pinto, wouldn’t you think he was an idiot for not believing you and getting his face burned off? I mean, why do you even think they’re back here, anyway? Tourism? 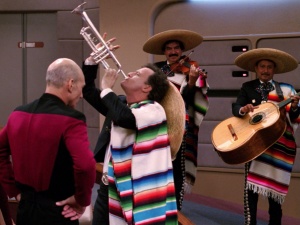 It isn’t like you’re going to argue him into *not* being a giant douchebag.

The primary reason the omnipotent Q shows up to bother us is because he thinks we’re interesting. You know why he thinks we’re interesting? Because we always struggle and fight and argue with him. If he shows up and said ‘we are going to play checkers for the fate of the Earth’s Moon’, just say “s’cool – what time?” Watch him get bored and leave. Isn’t that better than spending all that time yelling at a god? I know, right?

They are never utopias. Not ever. They either have some kind of weird disease and are going to steal your children or they’re indentured to some giant evil computer or they don’t know that people can die and will throw your young ensigns off cliffs for fun or whatever else. Repeat after me: I am from utopia, and everywhere else sucks. Again: I am from utopia, and everywhere else sucks. Earth is where it’s at, and keep that in mind when being offered to “join in the love ritual” with some stupendous busty redhead. Don’t buy it. It never works out.

Directive Seven: When You Go On Vacation, Bring a Phaser

Seriously, you should see the logs. Pretty much every time somebody goes on leave, they get kidnapped or attacked. Every. Single. Time. Go armed, at least with one of those little dinky phasers you can slip up your sleeve. You’ll thank us later.

Well, that’s about it. Good luck out there, Captain. Oh, and if you happen to meet the Borg, make certain your crew has practiced running. Seriously, Borg drones are awfully slow.