Been a while since I’ve put on my gamer hat hereabouts, so here we go… 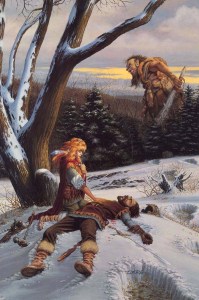 And if everybody but the cleric and the ranger quit, this probably happens.

Role-playing games campaigns are social enterprises that rely on a good group dynamic to be successful. In this sense, they are similar to team sports (observe how the jocks and the nerds doth rage at such an analogy! Indeed, it is beauteous to me!). A good RPG campaign, in order to work, goes beyond what actually happens at the table and into the social and (even) political sphere. Good GMs know this, and they set their games up to enhance it. Poor GMs don’t pay any attention to it, and they wonder why everybody quits their campaign halfway through.

A Word About Ideals…

Okay, so it’s worth pausing for a second to define what I consider an “ideal campaign” to be. An Ideal Campaign has the following characteristics:

These four things, when combined, mean the “campaign morale” is high and everything is going well. If one or more of these things aren’t working, the campaign is not going well (at least according to the Ideal).

How Is This Done?

Assuming we all want to get to Goal#1 up there, we actually need to address these goals in reverse order.

Organization: The first order of business is Goal #4: getting organized. This is really essential, because it’s the basic requirement of having a game: everybody needs to show up regularly and on time. Understandably, people will miss the occasional session due to illness or unforeseen circumstances or what-have-you, but on average everybody should be there. Furthermore, the game should meet often enough to create a kind of momentum. If you meet once and then not again for two months, people forget what is happening, the GM is less invested in continuing (since people have forgotten about it), and the whole thing can just fade away. Meet regularly, show up on time, and you can go from there. The party that plays together, stays together. 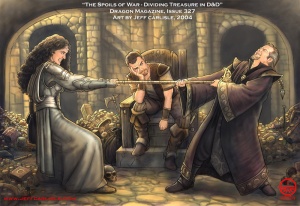 You really should try to avoid this.

Group Dynamic: As the GM, it is your job to make sure the party in your campaign is compatible and able to get along. If you have a friend that nobody else likes, inviting him to play may be a mistake for everybody. Now, generally I’ve found most gamers can get along with most other gamers for a few hours a week (or month), but there are exceptions (and you know who they are, too, I’d bet). Not inviting a buddy of yours because you think his incessant need to creepily leer at women might offend the two women playing might hurt his feelings, but hey – he’s the one being the creep, not you. That, of course, is an extreme case and, again, I’ve found personality conflicts like this to be rare.

More common (and arguably just as important), though, is simply thinking about everybody’s playstyle. A band of by-the-numbers point munchkins probably won’t understand or appreciate a real Role Player in their midst and vice versa. I personally recommend getting a variety of play-styles involved, assuming everybody understands how you are going to run the game. If everybody is on board and aware of the expectations, everything will go much more smoothly.

Engagement: This is a tough one. Even if you nail the first two, this one is probably the hardest one to master. It also might be the most optional of them all – players don’t have to love the plot of the game if they just love the action of playing – but I firmly believe having this in your corner makes everything better (everything!). As GM, this one lands mostly in your court. All players, when they make a character, are telling you the kind of things they want their character to be and do. If I make a greedy Halfling rogue with a complex about how short he is, I am pretty much telling you that I want to pick a half-orc’s pocket at bar and then have a bar-fight when he calls me “short-stuff”. You need to figure out what your players want and then you need to build the storyline around those desires. Alternately, you can tell everybody before the game starts what the game is going to be about and then ask everybody to make a character that fits inside that arena. Of the two, the latter is easier but the former is far more effective (if you can pull it off). In either case, if players love the concept, they will love the game, and they will be more likely to show up, more likely to have fun, and more likely (even) to get along.

Fun: The game is fun if people are smiling (or shuddering like they just saw a horror movie) after a session is over. How this achieved is complex, but generally I’d say the above three concerns are a good place to start. The other thing to remember is that this is a game. Try to avoid getting anyone’s ego involved. Laugh. Act like you’re having fun (which you should be, dammit, or else why do this?). Generally speaking, the more fun you have, the more fun everybody else will likely have.

In the end, these things all feed off one another. If you can get all four of them to work, then your campaign is guaranteed to be a success (I promise). If they all fail, people are going to be checking Facebook in the midst of the game and blowing off a session anytime a second cousin is in town. Believe me, I’ve been in both situations, and they are the best and the worst role-playing experiences I’ve ever had. Good luck out there, and have fun!