← Campaign Morale in RPGs
Follow Me, Boys! I Know the Way! →

If you’re like me, the thing that caught the most attention was the lightsaber crossguard on that guy’s lightsaber. Of course, being me, while everybody else is saying “that was so cool!,” I am saying “interesting – does that make his lightsaber a better weapon or a worse one?” In the “better” column, we can see that this guy now has the theoretical capacity to trap his opponent’s blade (well, assuming the hilt has ionized plasma in the corner rather than just on the blade and tines); in the “worse” column, he has a thing that, if pressed, might chop off his nose, thumb, or burn a hole in his clothing. 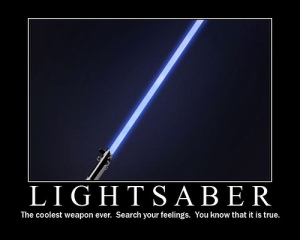 Very cool–no contest. But Jedi would behave a little differently, I think, were it not for the need for flash and glitz.

I’ve thought a lot about lightsaber dueling. Too much, really. Part of it comes from my nerdish obsession with detail and part of it comes from my brief 2-year stint on the varsity fencing team at BC (it should be noted that I was awful – I think the coach just recruited me as a living practice dummy for the much more talented fencers), wherein a learned a lot about practical swordplay. Anyway, by the end of things, I have two things to say about lightsaber duels in Star Wars:

I’m going to expound upon that for a bit. If you don’t like me getting all literal in the midst of the flash and boom of your glee, then you might want to stop reading.

Okay, so my analysis of lightsabers is based upon a couple assumptions of what they are and how they work. The blade is formed by a loop of plasma (superheated gas) trapped in a kind of magnetic bottling-field technology. It is the magnetic bottle that repels other lightsabers as well as blaster bolts (which are also plasma-based – they are not actually lasers). The density of the plasma in the blade is relatively slight, meaning the blade itself is virtually weightless, and the magnetic bottle is sufficiently rigid as to be similar to thick steel in stiffness (i.e. the blade doesn’t bend easily when pressed). All of these facts are clear from observing the films.

What This Means When Wielding One

Well, if the blade is weightless, rigid, and will burn through anything it touches, one of the first things you probably want to learn is how not to cut off your own arm or burn yourself or your clothing. Furthermore, if it cuts through whatever it touches, that means you really don’t need to put much muscle behind the thing to injure somebody – touching them lightly will do.

Given all this, your strategy when using a lightsaber would be to keep the blade away from your body and aim to injure the enemy with a quick touch. Given that, all the swinging around and acrobatics would be counterproductive. Lightsaber duelists would not slash much, but rather concern themselves with thrusting or quick, short cuts, therefore maintaining control over their weapon at all times and keeping the maximum distance between themselves and their opponents (better to lose a hand than a head or arm, right?).

Wait, Why Wouldn’t They Slash?

Well, a slash is slower than a thrust. Try it out – get somebody else and get two pencils of equal length. One of you hold the pencil with the point sticking at the other and the other hold it so that you are going to whack the other with the side. See who hits first – given approximately similar reach and reflexes, the thrust will strike home first, as there is less distance to go, less energy needed, and less dexterity required to pull it all off. Slashes are easier to dodge, are more likely to miss, and so on.

People slash with swords because the slash (or “blow”) carries behind it more force. That makes a straight-blade more likely to punch through armor or cut through bone and flesh. Also, it uses the weight of the weapon to its advantage. The thing is, though, if your weapon had no weight and needed no force to cut through things, why would you bother with slashing about when you could just dart in and poke them in the chest and kill them outright.

Sure, some slashing would happen (good for scything through a bunch of lightsaber-less enemies, for instance), but in a duel, you’d see the two Jedi suddenly become very compact and tight in their movements – more like an epee fencer than a Viking warlord.

How Would The Duel Look, Then?

Lightsaber blades would probably be as long as could be managed (which they may very well be – we don’t know). The Jedi would likely stand sideways with the blade in one hand, orienting his whole body behind the lightsaber. He would keep the point at his opponent, protecting his hand. Each Jedi would aim to strike the closest body part they could (ideally the sword arm of the other), thus disarming or stunning him, which would then allow a follow up and likely fatal blow. Bladework would be fast and not all that flashy to the untrained eye, all of it happening in a fairly compact 18″ by 18″ square in front of them. In brief, it would be every bit as deadly, but half as fun to watch.

The good news, though, is that they would still wear those flowing robes, as they would help hide the exact location of their body. This would make them a harder target for the enemy. Of course, those robes had better be flame retardant, or else that is one robe that is going to go up in flames as soon as it gets hit.

As for that crossguard, it’s clearly a good idea (everybody would probably have one), but it would probably work better as a basket-hilt configuration, curling over the hand and protecting the arm in a circle, in the manner of a rapier. So, yeah, basically it would be less Samurai/Kendo and more 3 Musketeers/Fencing.

That’s my thoughts, anyway. For the record, I am rather glad this isn’t what the lightsaber duels look like on screen, since that wouldn’t be half as much fun.

← Campaign Morale in RPGs
Follow Me, Boys! I Know the Way! →