My, my, but I have been a busy little bee. When last we spoke, I told you I had writing to do. Well, over this break I have revised/rewritten some 100,000 words or so. Yes, I know. I am only about two and half chapters or so (not counting the Epilogue) away from finishing the fourth draft and third complete draft of All That Glitters – my sequel to The Iron Ring and Blood and Iron. It rocks. When this draft is done (ideally tomorrow), I will be sending it off to beta readers just to make sure my assessment of its quality isn’t some elaborate fever dream of my overtaxed imagination.

Speaking of The Iron Ring (release date is February 10th, 2015, so…a little over a month away!), I got to see some of the preliminary cover art a few weeks back. I’ve been sitting on it all this time, waiting for the finalized cover art to be confirmed, but I’m tired of waiting and I need something quick and simple to post on this blog to bring it back to life. So, without further ado, here is what the cover of my debut novel may look like: 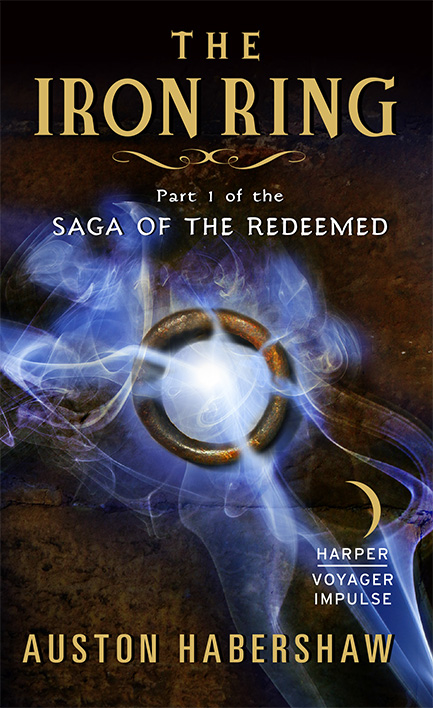 The other versions had this same image, just varying type and font layouts.

Now, this is very exciting. I wasn’t sure what to expect for a cover, and this isn’t what I expected, to be honest (I had in my mind some Charlie’s Angels-

esque tableau of my main characters engaged in various acts of derring-do), but I do like this. It’s very striking and simple and I just love the font. Of note, as this is an e-book release, the simple elemental design makes a lot of sense. Everybody is going to see this thing as a thumbnail, which means an intricate art style would be wasted – this grabs the attention and displays a key plot element (Tyvian’s infernal, behavior-modifying iron ring).

Anyway, when the really super-official title art is released, I’ll be sure to let everybody know. For now, this post is just to say I’m back, I missed you all, and I’ve got a lot more stuff to do. Be seeing you around!