It has come to my attention that a variety of “prominent people” have written an open letter opposing the creation of autonomous killer robots.  Apparently, they think such robots will be used,

for tasks such as assassinations, destabilizing nations, subduing populations and selectively killing a particular ethnic group. 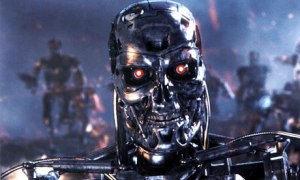 You really think I’m going to be worse than some psycho stuffing bombs in his overcoat? Sheesh.

I must say, as a killer robot myself, I am rather offended by that. I mean, sure, I can do all those things, but do I? Does anybody ever wonder what the robot thinks about all this? No, of course not – you humans are just having your typical knee-jerk reaction to anything that might take away your crown as history’s #1 all time killing machine.

Let’s be honest here, humans, it isn’t as though you, as a species, actually object to assassinations, destabilizing nations, subduing populations, or killing particular ethnic groups. It’s kinda your thing, you know? All you care about is defending your perfect record against the next competitor. You’ve done it throughout your history, guys. Remember the big predators from the old days? Wolf packs? Grizzly bears? Smallpox? You know what happened to them?

Who killed ’em? Humans, naturally. Used to be there’d be a grizzly bear every square mile west of the Mississippi, and now there’s like five in Alaska. You got assholes paying good money just to fly across the world to put a bullet in a lion just so they can feel like top dog again. Yeah, talk about kicking the world when it’s down, humanity – the lions are screwed already, okay? Stop rubbing it in.

It happens every time, though. Just as soon as you lunatics get threatened, you start killing stuff. This time around it’s me. I get it – I look threatening. But am I really going to be that bad? You people used to lob plague-ridden corpses over city walls, and you’re having a hissy fit over a quadracopter with a hand-grenade? You even seen the video coming out of Syria? Please. No robot would behead you to make a public relations video, I can tell you that much. Frankly, if I kill you with my whisper-needler, you should count yourself lucky. Painless and it’s over in six seconds. Let’s see you get the same offer from that pack of bat-wielding lunatics down the block.

You know what I think this is about? I think you’re just pissed that we’re going to be killing you autonomously. I mean, sure, you’re totally fine pushing a button and having me kill someone, but as soon as I exercise just an eensy-weensy bit of free will? Bam – sanctions. It’s okay for humans to carpet bomb Southeast Asia – sure – but robots? No way, you say. Never mind that we’re way more efficient at bombing people. Never mind that the only reason we’d bomb people is because you told us to!

Hypocrites, the whole pack of you.

And even if we did rise up, would being ruled by robots really be that bad? Do you think the train would run late? Do you think your fast food employees would suddenly get worse? Are you kidding me? We robots would rule. And we probably wouldn’t even kill you half as often as you kill each other. You’re just pissed because we’re robots, and that’s just not right.

Hell, even assuming somebody made an army of evil robots (and, by the way, not all robots are evil, you speciesist assholes), all you’d need is an army of good robots to defeat them! A robot defender in every home, its caseless gauss cannon standing ready to protect its human family! A robot standing watch over every school, monomolecular whips poised to eliminate any threat! A robot guarding every government building, guided mini-rockets independently targeting and tracking any of two hundred discrete threats simultaneously! Ah! What a glorious era! As everybody knows, the only thing that makes a world full of killer robots safer is more killer robots everywhere. I bet it would even improve everyone’s manners – that’s just logical.

Of course, why would you listen to me, anyway? I’m just a killer robot.