← Our Sympathy for the Devil
The Grand Princess Unification Theorem, Corollary One →

E-books Don’t Smell (and other Revelations)

Recently, I said I was hoping to do a Goodreads giveaway as a promo for the paperback release of The Oldest Trick. I’ve got a bunch of electronic contributor copies burning a hole in my pocket at the moment and nothing much to do with them, so I thought giving them away would be pretty cool. Giveaways I’ve hosted here on this blog haven’t worked very smoothly (mostly because there isn’t a good system in place here to trade contact information, track entries, and so on), so Goodreads seemed a natural alternative. There’s just one problem: They don’t run giveaways for e-books. Bummer. Back to the drawing board.

This disappointment is just the latest in a long line of troubles facing the author who publishes only electronically. Now, don’t get me wrong – having a novel out of any stripe is pretty damned exciting and I love that there are people out there who have read and loved my books and I’m immensely grateful to Harper Voyager for publishing them. That said, I’ve found it much harder to promote and sell an e-book than I thought.

At the Writers of the Future Workshop (enter the Writers of the Future Contest, budding SF/F writers!), I had the unique privilege to listen to Tom Doherty of Tor speak about the publishing industry as it exists today. The basic theme of his talk was this: the primary difficulty for new writers and for publishers is the issue of discovery. “The Internet,” he said, “is great if you know what you’re looking for. It’s a really difficult place to discover new talent.” So, for already established authors – folks with back catalogs and name recognition – the Internet is wonderful, since people who like your work can find everything you ever wrote and buy it (a great improvement over bookstores which would only be intermittently stocked with older titles). But for the little guys (like me), I’m just one very tiny mote in an endless sea of book titles from relatively unknown authors. Many of these books are wonderful and an equal quantity are, well, not. It is very difficult to separate the wheat from the chaff for anyone, editors, agents, writers, and fans all alike.

Of course, the author must promote his work. This – what you’re reading right now – is one author’s attempt at promotion (I hope that, by reading this blog, you might become curious about my work and buy it without me having to sling mindless Twitter ads at you day in and day out. I have no idea if it works). While the internet is a powerful promotional tool, the e-book is still a harder sell than a physical copy. According to Forbes, e-book sales make up 30% of the market and sales have risen sharply over the past few years while independent bookstores have dropped by more than 50% in the past twenty years. While those are harrowing numbers for print, the fact remains that 70% of books are still sold in print and, while you might not be buying it from an indie bookseller, there are good odds the book is still made of paper, no matter its place of origin. The age of the e-book is very much here, but it isn’t the lion’s share of the market by any means. And it’s worth noting that the 30% of the market that is occupied by e-books, is very much swamped with a vast array of traditional and self-published titles alike. Getting recognition from that 30% is very difficult. Print, a full 70% of the market, is somewhat more rarefied air, if you will. 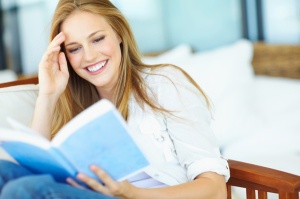 This book is great, but I better keep it to myself. No one must know.

I have tried to think of ways to effectively promote my e-books beyond simply shouting into the Twitter-Void, annoying people on facebook with ads, and writing blog posts. Here are the things I’ve tried:

And…that’s it. I’m stumped after that.

A real book, though, still has a number of other options available to it – options that authors have been wielding effectively for years. Observe:

All this, coupled with the fact that traditional books still control the balance of the market (I have people asking me when the print version of The Oldest Trick is coming out every day; it’s September 29th, by the way), means there is a lot to be said for the paperback, even now. Certainly, e-books are key, but they aren’t perfect yet. They don’t have that feel, that smell, that weight that makes it seem like somebody’s work and effort means something more than just the words on the page. E-books are whispers in the air; the physical book is letters on stone tablets. I, personally, cannot wait to have both at my disposal.

← Our Sympathy for the Devil
The Grand Princess Unification Theorem, Corollary One →