← Here I Go Again (On My Own)
Writing Series: When Do You Walk Away? → 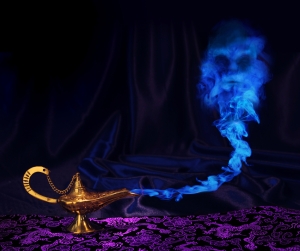 Got a story for you. It’s an old one; maybe you’ve heard it.

A wealthy merchant is walking through the streets of Baghdad when he sees the Angel of Death. Death recognizes him and seems very interested in him. The man concludes that Death is in Baghdad to take him and, unwilling to die, he expends all his vast wealth in one day to secure the service of a genie. “Genie,” says the man, “I’ve no wish to die. Transport me to Damascus in one night, so that I might evade Death’s embrace.”

And so the genie did as was asked of him and worked great magic to transport the man, along with all his family and home and livestock and servants, far away to Damascus in the space of a single night. The merchant slept easily, knowing he had fooled Death.

The next morning, however, the man went into the streets of Damascus to find Death waiting for him. The man was aghast. “What? How did you find me?!”

Death shrugged and said, “That is why I was so interested to see you in Baghdad. You see, I had an appointment to meet you today in Damascus.”

Heard that one? Well, it’s true, let me tell you. I was the genie.

You would imagine, as an immortal being whose task it is to grant wishes, I would have seen more than my fair share of happiness over the millennia. Not so, though. I have some thoughts on the subject.

You people – you mortals – you can never figure out what you actually want. I mean that, too – you cannot, as in you are not capable. A man wishes for wealth and dies alone. A woman wishes for beauty only to drown the next week. A boy wishes for power only to pine for his mother. On and on and on it goes. You don’t know what tomorrow brings and, so terrified that Death might have penciled you in for Friday, you pick the absolute worst thing for you at the time and think it solves all your problems. It is so consistent as to be actively tragic.

Had a guy once – sometime in Ancient Babylon – wish to be an invulnerable warrior. Easy enough, right? How can a guy go wrong with that? Simple: his tribe, the people he wanted to protect, drove him out of their lands claiming he was a demon. So he was the world’s biggest badass with nothing to fight for. He died of old age as a hermit. Blamed me, too.

I don’t trick people, okay? Not my thing. I’m a servant of the lamp and that’s it – you rub, I appear, and we do business. I am not “imprisoned” in the lamp – it’s just a convenient hole in space-time for me to zip through. I’ve got a life outside of this one. I mean, not one you’d easily understand, but it’s there. Had one lady wish to have me explain it to her once. She went insane.

So, yeah, I’m not upset when somebody rubs the lamp and pops me out. Not a big deal – less than an eye-blink in the breadth and depth of the cosmos, understand? You really cannot waste my time, since I have as much of it as I want. When you wish for something, I give it to you – no judgment, no tricks. Do I sometimes screw up the details? Yeah, sure – some of you guys are damned unclear. I mean, how am I supposed to interpret “I wish for the world?” Go on – I dare you to figure out, in concrete terms, what that means exactly. That guy’s name was Atlas and man, was he pissed. Not my problem though – if you can’t be bothered to read the fine print on the lamp itself, don’t come crying to me.

Anyway, where was I? Oh, right – wishes. Let’s get this out of the way: You can’t wish for true happiness, okay? You can’t have it like that. I cannot give it to you, much as I might want to. You mortals are always thinking in external terms – give me gold, give me power, give me land, give me love – and that’s missing the entire point. Happiness comes from within.

Oh sure, the occasional wise-acre wishes for internal happiness, but it doesn’t work. I just have to turn them into different people. Is that success? You want to know what really happened to Attila the Hun? They say he died of a brain hemorrhage while doing the wild thing after deciding not to sack Rome. What he did instead was take the lamp, given him by Pope Leo I (who had used it to become pope), in exchange for sparing the city. So he did. And then he wished to be truly, permanently happy. I turned him into a friendly dog – best I could do. His followers did the rest.

Happiness is something that people who seek me out are never going to find. Happiness is contentment, understand?  To be content with your lot, no matter what your lot is. That is true, contemplative happiness. If you got it, what do you need me for? What can I possibly give you to get you there? No, all wishes – all rewards and triumphs – are things you need to have grow out of yourself, not have dumped on you from on high. Give a fish shoes and it’ll have no idea what to do until it grows some feet.

The best wish ever? Oh, that’s easy: fella name of Lao-Tzu, ancient China. Summoned me up and chatted with me for a little while on a road in the middle of nowhere. When I asked him what he wanted, he said, “Only to talk. Thank you.”

He meant it, too. I still think about that sometimes.

Anyway, enough about me. Let’s whip you up that private island, okay? Did you have a hemisphere in mind, or am I just gonna get creative?

← Here I Go Again (On My Own)
Writing Series: When Do You Walk Away? →