← Calling the Muse, Achieving the Zone
No Spoilers Are In This Post →

The Union of Stars: The Aigyth Paradox

And so we come to discuss the Dryth. 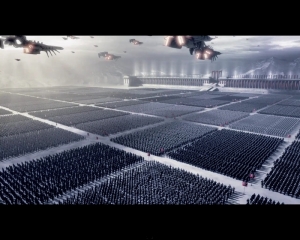 The Solons, and all that they have done and will do, no doubt dominate the minds of every being in the Union. Beings of almost mythical power and unlimited wealth, each independent and unique, each equally as likely to be savior or destroyer.

But today is not the time to discuss the Solons. No doubt you have heard ballads enough of their exploits. No, today we discuss the Aigythi, the Dedicated – the armies of the Solons. Who among us has not borne witness to an Aigyth on patrol? Who has not been confronted by one, armor-clad, face obscured by that eyeless helm, and not quavered at their invisible gaze? But what are they? How can they have come to sacrifice so much of themselves to the service of their Solon?

The answer, like most good answers, is a complicated one. It asks that we look at the very roots of Dryth culture and mythology as well as the technical and practical limitations of the Solons themselves (blasphemy, I know, I know – and yet, if I am to educate, I must occasionally blaspheme). Though the Aigythi are a relatively new phenomenon, they are an offshoot of a much older tradition.

The Dryth homeworld, Odryss, is an inhospitable place. Its arid, radiation soaked surface was slow to give rise to complex life. When we Thraad were inventing mathematics and taming beasts in our First Age, life on Odryss existed only beneath the surface, in the deep caverns of the subterranean oceans. The Dryth, it is thought, are descendants of hardy creatures that journeyed from the warm, dark embrace of the deep oceans to brave the harshness of the deserts. The Dryth evolved slowly, but also steadily. No cataclysms or great plagues hampered their process, no extinction level events diverted their evolutionary path. When we Thraad has risen and fallen twice already, the Dryth grew unimpeded.

For aeons, the Dryth were small in number, as their habitat could not sustain a large population. They were a nomadic species divided into small tribes and constantly warring for sparse resources. By necessity the species was hardy, innovative, and independent. Their oral tradition is rife with tales of individual heroism and courage – clever warriors and powerful shamans, doing battle with the gods and nature for the protection of their people. The Dryth cultural obsession with independence and self-reliance stems from these deep-seeded moments, from a time when their ascendance was very much not guaranteed.

This, then, explains the rise of the Solons well enough: individualistic god-heroes, leaders and self-reliant pioneers, dragging their people along in their wakes. But what of the Aigythi? How does a culture that values independence and individualism so highly support such vast armies of people who are, in essence, enslaved to their Solon’s will?

There is a peculiar paradox among the Dryth. For as much as they style themselves as free and self-sustaining people, their admiration for the Solons – the ideal representations of their cultural desires – leads them to mimicry and imitation. This, ironically, leads them to conformity. In their haste to be “as unique as” their Solon masters, they wind up being but pale representations of them. The culture of the Dryth Houses is dominated by this paradox.

The Aigythi are the prime example of this paradox. Individual Dryth, free to make their own decisions, who willingly give up their minds and bodies to serve the Solon. When the Aigythi puts on the helm, his or her mind is open for the Solon to read. The Solon may draw upon the experiences and knowledge of any Aigythi as if it were their own. The Solon may command and even control any Aigyth body as though it were but another appendage. Naturally, of course, the Solon’s mind is not infinite and cannot control all Aigythi at once, but that is of little import. A talented Solon can lead an army of Aigythi with a level of cooperation and synergy other non-collective species cannot dream of, all while retaining a level of initiative and innovation among its members any collective species would envy. The perfect army led by the perfect warlord.

Now, it does happen that Aigythi retire from service, leave the guidance of their master, or even occasionally betray their Solon. Such, though, are rare. A hundred Aigythi might sacrifice their lives to prevent their Solon injury, even when that Solon would never think twice to abandon them should his strategic aims dictate him to do so. It makes one wonder: at what point does loyalty become madness? At what point does the self become consumed by the group or by the master? The Aigythi armies are, I believe, the most potent example of this paradox, and therefore ought to be studied with care.

But enough blaspheming for one day. Come, let us eat.

← Calling the Muse, Achieving the Zone
No Spoilers Are In This Post →