← Writing Updates: My Continued March (Amble) to Victory (Modest Success)
Of Awards and the Advocacy Thereof →

What Children’s Books Can Teach You About Synopsis

I’m in the process of trying to write a synopsis for book 3 in The Saga of the Redeemed in order to try and secure an agent to represent me for that upcoming project. For those of you who have never written a synopsis and, blessedly, may never be asked to, a book synopsis is basically a 1-3 page document that details the entirety of your novel’s plot to an agent or editor. The whole thing, more or less, from beginning to end, soup to nuts.

No, that’s not enough. Let me rephrase:

There, that about covers it. The “why” of their suckitude is largely due to the fact that you’ve got to condense 80,000-100,000 words into 750 or less without failing to convey the awesomeness of your work somehow. It is summary, but it needs to be a bit more complete than that – while you can’t bog down on the details, you also can’t leave out all the details or the book will seem boring or even confusing, and that isn’t good. So, you’ve got to figure out which details to convey. To do that, you need to know what makes your story great on a fundamental level. As the artist, who is so close to his or her work that everything seems both great and awful at intervals, this is a very challenging task. Synopses are why I laugh at my students who complain about summarizing a twenty page nonfiction article into a one page summary. (I know, I shouldn’t laugh, but in case you haven’t figured it out yet, I’m kind of a bad person)

There are a lot of resources out there on how to go about writing a synopsis (this is one of the better ones, I think), but I think it is probably easier to see it done than have it described to you. Also, in order to see it done, you need to be familiar with the thing being synopsized or you won’t fully understand the choices the author made when doing it. To this end, I recommend reading children’s books. 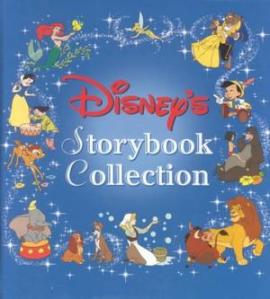 Read the whole plot of The Lion King broken down into ten pages with two or three sentences apiece.

Not just any children’s books, mind you – children’s book versions of full-length movies, like Toy Story or Brave or The Empire Strikes Back. Now, if you’re like me and have kids and have watched Tangled a hundred thousand times by now, you know that movie inside and out – you can sing the songs, you know every expression on every face, you can recite the lines, and so on. Then you break open the kids version of the story and you read the story of Tangled, but with hardly any words at all. And the crazy thing is, for the really good kids books, the authors do this spectacularly well. They are simple enough so that a two-year-old can understand it, well written enough to adequately convey the story, and fast enough that the kid will sit through the whole thing. It can be really pretty amazing.

Now, obviously they leave things out, but what they leave out is very telling. For instance, in the broken-down version of Tangled my daughter has, Pascal (the pet chameleon) goes completely unmentioned. I think there’s (maybe) one picture of him sitting on her shoulder, but the writer never bothers to explain what he is, who he is, or why he’s there. Why? Because, while the character plays a useful supporting role to the character of Rapunzel (as sounding board for the lonely girl, as conscience, as a kind of Greek chorus, as comic relief), he has zero to do with the things that make the plot work. You fundamentally don’t miss him, even though if he were missing in the film, you’d be forced to watch about twenty minutes of Rapunzel talking to herself, which would be weird.

Children’s adaptations of full-length movies can also very quickly expose weaknesses in those same movies. My other daughter has the golden-book version of Attack of the Clones and, I’ll be honest, it doesn’t make a hell of a lot of sense. Why? Because the plot involves everybody running around doing things for reasons that are largely unclear and, in order for it to make any sense at all, they have to leave out the parts of the movie that people seem to like, which is most of the lightsaber fighting, monster wrestling, and giant battles. Could it be synopsized better? Yeah, probably, but boy is it going to be hard to do.

Take this page from a Cinderella adaptation: 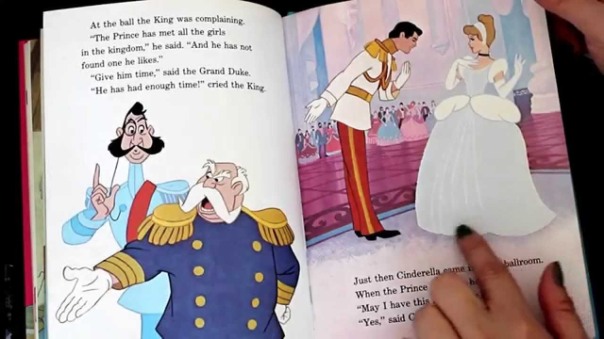 Those two pages cover about fifteen minutes of film. The only reason there’s as many words as there are on the page is because of the need for dialogue. Cut that out, and the page becomes “the king was upset because the Prince wasn’t dancing with anyone. Then Cinderella arrived and she was so beautiful the Prince danced with her.” There you go – the ball scene, in and out. Throw in one more sentence for color.

You’ll find that children’s books do all of the things that Jane Friedman suggests in the article I linked to above:

The good children’s adaptations will do this very, very well. You will feel as if you watched the movie, even though you totally didn’t and it took exactly eight minutes to read. Reading them has honestly inspired me to see how tight and yet, also, compelling a synopsis can be. So, here I go – off to write my own.

I’ll let you know how it goes.

← Writing Updates: My Continued March (Amble) to Victory (Modest Success)
Of Awards and the Advocacy Thereof →