← Read Campbell Award-eligible Stories For Free!
Maybe This Blog Should Have a Name… →

There is nothing to writing. All you do is sit down at a typewriter and bleed. ~Ernest Hemingway

I work in a hospital district. About the only decent food to be had is in the cafeteria of Boston Children’s Hospital just up the road. It’s cheap, nutritious, fresh – the whole deal. So I go there a lot.

Every once in a while, though, I see something in the lobby that makes me wish I hadn’t gone there. If you’ve ever spent any time around seriously ill children, you will understand what I mean. For those who don’t, let me give you an example of one such scene. Picture this:

A little boy, five or maybe six years old, happy and smiling, full of boisterous energy. He has both parents on either side of him, each holding one of his hands and letting him swing between them. The parents, however, have grave expressions; their eyes seem hollow, their steps reluctant, their shoulders stooped. Their gaze is fixed on some distant point in the future, and they barely hear the kid when he asks, still smiling, “The doctors are going to fix me, right?”

They don’t answer. They just march their kid deeper into the hospital.

Let that one sink in for a second. Now, I ask you, is a good lean pork loin worth that image? Knowing that, somewhere deep in the bowels of that (blessed) institution, some poor kid is in for the fight of his life and nobody except him thinks highly of his odds? I gotta say, that one hurts, like deep down. My breath catches every time I think about it.

One of the things with being a professional writer is that you need to improve your craft. You need to get better. In order to do this, you clearly need to know where you need improvement. For me, the challenge has always been writing stories with legitimate emotional impact. I strive to do this, of course, but I’m not naturally adept at jerking tears from my audience. I prefer to make them laugh, make them rage, make them shudder, or make them cheer. Pity, pathos, and grief are emotions I find hard to evoke sometimes. But I have to try.

I think part of my trouble lies with the death of my brother, Preston. He suffered from a unspeakably cruel degenerative neurological disease called Batten Disease, which is essentially something like ALS except in children. My brother was born apparently normal and lived the early parts of his childhood like a normal kid. He learned to talk, walk, he went to school, he and I were best buddies, as brothers ought to be.

And then he gradually went blind. Then he slowly lost the fine motor control needed to write (and in first or second grade, too). Then he had seizures –  little ones at first, then bigger and bigger and bigger. His gross motor skills decayed. He had trouble walking. He couldn’t get to the bathroom anymore and I, his roommate, was responsible for taking him in the depths of the night. He lost the ability to speak. To eat on his own. Year after year, little pieces of my brother were carved out of him and lost forever. Finally, after over a decade of this, he finally died just shy of his 22nd birthday. He had been in a wheelchair in a pediatric nursing home for almost a decade. I cannot remember the last words he spoke to me, but they had been in our shared bedroom sometime before he lost speech, probably about a decade before he actually died. I cannot explain to you how much it distresses me that I cannot remember those words. 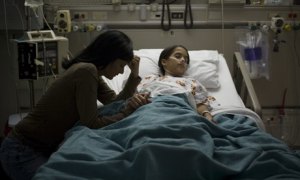 Yeah…if a show features this kind of thing prominently, I’m *out* (Looking at you, Grey’s Anatomy).

My brother’s death has had a pervasive effect on me. During my adolescent years, when everybody else was wallowing in self-pity, I had a tangible, visible, daily reminder of how much my stupid teenager problems did not matter. When I read The Catcher in the Rye, I fucking loathed Holden Caufield, the miserable wretched coward, who I saw as cutting out on his family in the wake of his brother’s death. I still loathe that abominable prick and cannot stand to read the book again. My brother’s death has had a severe impact on my belief in any kind of benevolent deity (which I find very hard to accept), has tempered my general sense of cynicism and gallows humor about the world, and caused me to have a fairly comfortable relationship with the idea of death as a release.

The other thing my brother’s death caused is my poor reaction to sick children. By “poor reaction” I do not mean I fear them or hate them or anything. I don’t sneer at kids in wheelchairs. But the sight of them makes me angry – makes me angry at a world in which children are struck down with horrible diseases for no reason whatsoever, or angry with adults who are so careless and clueless and selfish that they fail to care for the children they love. Saw a woman in line at the cafeteria once glare at a little girl (who was two shades shy of a ghost, mind you) cheering loudly over the soft serve ice cream maker. It took all my willpower not to slap her (“If some sick kid who’s just spent who knows how long in a hospital bed wants to cheer over ice cream, YOU LET HER FUCKING CHEER, YOU MISERABLE WITCH. So help me, I will fight you…”).

I’ve basically got a big, scabbed over wound on my heart. I don’t like to prick it much and, for whatever reason, I don’t tend to bleed at my keyboard. This, though, is a weakness. If I wish to become better, I need to imbue my words with the pain. I’m working on it.

In the meantime, you’ll all have to settle for me making you laugh and rage and shudder and cheer.

Posted on March 9, 2016, in Critiques, Theories, and Random Thoughts and tagged children, grief, self improvement, writing. Bookmark the permalink. 4 Comments.

← Read Campbell Award-eligible Stories For Free!
Maybe This Blog Should Have a Name… →