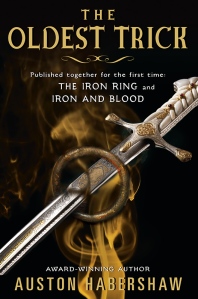 Haven’t read my debut fantasy novel yet? Well, you’re in luck: both halves of the novel (The Iron Ring and Iron and Blood) are now available in a single omnibus edition (i.e. “the complete novel I intended”) called by its original title, THE OLDEST TRICK. And there is even better news! The e-book version is currently on sale for a mere $1.99! That’s right – for about the cost of a Gatorade from a gym vending machine, you can get the novel reviewers have been calling “a romp in the style of Scott Lynch and Patrick Rothfuss” and “an amalgamation of anime, grimdark, and the top tier of contemporary epic fantasy. ”

So, go and do it now! The sale won’t last forever, and the sooner you get it, the sooner you will be ready for the next installment, NO GOOD DEED, which is scheduled for release on June 21st!

No Good Deed‘s final draft was accepted by my editor on Friday, which means all that’s left is the copy edit and then the thing is off to the presses (errr…or digital formaters. Or whoever handles e-books – it’s an e-book initial release). You can pre-order it now on Amazon, and you’ll be hearing an awful lot about it here over the coming two or three months. Stay tuned for promotions of various stripes, once I figure out what the hell those might be.

Oh and by the way…

This is my final year of eligibility for the John W Campbell Award, which is given to new writers in the field of science fiction and fantasy. After two years you are no longer eligible, so if you think I’m great, now is your last chance to act (nominations for the Campbell end at the end of March, BTW). I have a couple things eligible. My novel (see above) and a couple short stories. One you can read for free right here on Escape Pod. I’m fairly proud of it and it has even received a pretty glowing review from SF Bluestocking which I shall excerpt for you here:

“Adaptation and Predation” is an excellent piece of world building, something that is often lacking in short fiction but which Auston Habershaw accomplishes here with panache. His cast of alien species is wonderfully imagined and described, and this short exploration of life in their highly stratified society is simply riveting.

High praise, yes? I think so – I’m very pleased at the review and, should you find it in your heart, feel free to nominate it (and me) for whatever you feel it deserves.

Okay, so there you have it – horn tooting over. I’ll be back later in the week with something more substantive for you folks to read.

Thanks, and talk to you soon!