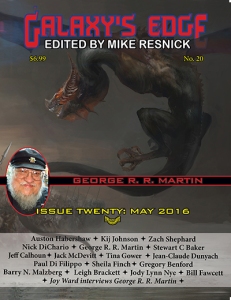 Just out this weekend, my story “Lord of the Cul-de-Sac” can be found in this month’s Galaxy’s Edge. It’s a charming, light-hearted tale of a dragon moving to suburbia and the collapse of the housing markets in 2008. You can read it here. It’s free online, but you can also order it (and the rest of the issue) in dead-tree format by going here and following the links beneath the cover art.

Galaxy’s Edge is a great venue and I’m very proud that my work has made it there, sharing a table of contents with the likes of George RR Martin, no less (!). Go read the whole issue – good stuff!

In other publishing news, I’ve got at least three stories coming out in the next few months (well, at least one, but as many as three – the other two aren’t exactly upfront about their publishing schedules, shall we say), so stay tuned.

Also, a reminder that NO GOOD DEED, Book 2 in the Saga of the Redeemed, is coming out on June 21st! Pre-order your copy today (available everywhere fine e-books are sold)!

My semester is wrapping up and I’m starting to gear myself towards what my summer writing project will be. It’s a bit up in the air (currently talking with an agent about best career moves – exciting stuff, but I can’t really say more yet), but there are good odds I’ll be looking to dig into Book 3 of the Saga of the Redeemed and possibly plan on having a solid draft finished by the end of August. Either that, or giving the Saga a rest for a bit and working on a new stand-alone or maybe series. Hard to say at this point, as I’m at something of a crossroads in my career. My contract with Harper Voyager is complete with the delivery of NO GOOD DEED, but I don’t feel the series is finished – it’ll take two more books, I think. However, the series, while selling modestly well, isn’t selling anywhere near enough and isn’t getting enough attention to necessarily warrant 2 more years of my time to completing, as much as I love it. If there are better options, I might be better off taking them and circling back to this series later on.

But I’m getting ahead of myself. For now, go and check out the May 2016 issue of Galaxy’s Edge!