← Diet Story: Writing Flash
The Union of Stars: The Tohrroids →

Approval of last month’s minutes? Anybody? Can I get a second?

Hail, unholy brethren! We meet tonight, beneath a moonless sky, to discuss our fiendish and ungodly enthusiasm for that blackest of black speech, the literature of fantasy authors. Bill will pass around the basket for monthly dues, as usual. No more newt’s eye, please – we’ve still got a crap-ton we’re trying to unload on those Wiccans who meet in the university annex down on 5th street. Stacey is also circulating a copy of the minutes from last month’s minutes. Just everybody confirm it’s written in the blood of an unbaptized virgin and we can get to new business.

All set? Oh, and there’s a fountain of baby tears at the back if you’re thirsty. And coffee. Yes, Paula, there’s decaf. Jesus.

It has come to our unholy attention that Graeme Whiting, head of the Acorn School, has declared to all who will listen that our genre of literature – Fantasy – is likely to damage the sensitive brains of young children. He says that he “stands for the ‘old-fashioned values of traditional literature’ rather than the modern ‘dark, demonic literature’ which could warp children’s subconscious minds.”

He is, of course, entirely correct. Such is our goal and has been ever since the Grand Wizard Tolkien spoke to us in the thousand-tongues of the goat-footed god and gave us our life’s goal: to consume children’s innocence with tales of wonder and magic.

What is distressing is this: Mr. Whiting suggests to the world that parents “leave those mystical and frightening texts for when they can discern reality, and when they have first learned to love beauty.”

This, of course, may prove to be an existential threat to our goals, and must be counteracted. Why, if children learn to love beauty, they will never be indoctrinated into our hellish ways and our nefarious cult may die out with its goals of world domination unrealized. This must not come to pass! Think of the mind-warping horrors children will be spared!

Not to mention the obsession with implausible sporting events!

If our future acolytes are driven away from Harry Potter, the unholy ominbus of Grand Priestess Rowling (praise be her name!), how shall we infest the youth with the demonic notion that even the least among us may hold within them great power? Why, in studying the forbidden books’ heretical whisperings, children will develop the perverse idea that people should not be judged by outward appearances but rather by internal character and nobility. Think of the wickedness the world would be spared if these books are banned from young eyes! 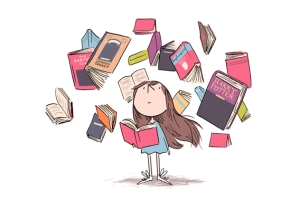 BEHOLD THE POWER OF DARKEST FANTASY!

And what may occur if the impressionable innocents of future generations are not exposed to the grim and hapless prose of Dark Master Roald Dahl? Why, how can we be assured that children are corrupted to believe they are independent and respected agents of their own fate? We will never bring about the end of civilization if innocent youths are indoctrinated into a love of chocolate or exposed to the possibility of going on an adventure inside oversized produce. Indeed, Dark Master Dahl’s work has been instrumental in making school heads look like sadistic monsters ever since his black manifesto, Matilda, was circulated among the unsuspecting population. Obviously Mr. Whiting caught on to what we were doing there. He is a clever one, no doubt, and must be taken seriously if global apocalypse is to be assured.

Without an appreciation for long hikes, our plans for world domination are for naught.

But let us consider the gravest of threats posed by this unrepentant servant of the light, Mr. Whiting (foul gods! Even his name is a clue to his spotless soul!). What if Mr. Whiting manages to get children to not read the works of the almighty Grand Wizard himself? Why, without Tolkien ravaging the immaculate souls of children, they may never grow up never having his magic worked upon their deepest being. Then, instead of becoming lovers of such black virtues as “peace,” “fellowship,” “humility,” and the “beauty of nature,” they will instead grow up to gallantly work as cogs in the mighty machine of the modern world, bravely grinding their hopes and dreams to dust so that they can selflessly save society from the foul curse of dreaming about sunlight and the sound of trees.

And then the forces of evil will lose.

Brothers and Sisters in Wickedness, we must redouble our efforts. We must strive to put a Pratchett in every pre-teen’s hands. We must slip Lloyd Alexander beneath the pillows of unsuspecting whelps the world over! We must not rest until we inflict the words of Lewis Carroll, L Frank Baum, Suzanne Collins, Ray Bradbury, and David Eddings upon the impressionable minds of young people, twisting their brains into organs capable of that great perversion: unrestricted imagination, wonder, and love of reading.

If we fail, the forces of light will triumph, and our children will instead learn to read sterilized, safe, and reverent works of great literature, such as Titus Andronicus, The Rime of the Ancient Mariner, The Odyssey, Heart of Darkness, Beowulf, and Frankenstein.

Posted on May 9, 2016, in Fiction and tagged fantasy, Graeme Whiting, humor, satire, The Telegraph. Bookmark the permalink. Leave a comment.

← Diet Story: Writing Flash
The Union of Stars: The Tohrroids →