← Read “When It Comes Around” on Perihelion SF!
One-on-One: The Dramatic Importance of the Duel →

It’s Not a Joke If No One Gets It

Hi, everyone – sorry I’ve been away for so long. I’ve been a mixture of sick and busy and just haven’t been able to get back. Hopefully you’ve all had time now to read my story in Perihelion. Right? 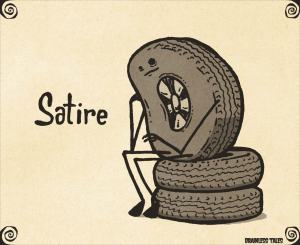 For those of you taking notes, this is neither satire nor parody. This is farce.

Anyway, for today’s topic, I’d like to discuss satire a bit. It’s on my mind lately largely because it is becoming more and more prevalent in my social media feeds of late and, like most things, I have definite opinions about it I want to voice, and as this is my blog, well, you know the rest.

Satire, technically speaking, is a style of art that exaggerates something in society (usually people or customs) to the point of absurdity for the purpose of critique. While it is often humorous, it doesn’t need to be. Ostensibly, its purpose is to effect social change or draw attention to social problems, which is broadly what distinguishes it from parody, which is primarily intended to entertain and, indeed, satire can use parody, but in the end it often isn’t very funny.

The thing about satire is that it can be done very well (e.g. The Onion or The Borowitz Report) or it can be done very poorly (The Daily Currant comes to mind, though it has gotten a lot better in recent years). The difference, to me, is this: if you, a reasonably intelligent person, read a satirical article and cannot actually tell whether or not it is satirical or not, this is bad satire. If you find yourself googling whether or not the thing described actually happened, it has failed as a piece of satirical writing.

Let me explain: Satire is the art of exaggeration for the purpose of creating an effect. It is a kind of reductio ad absurdum: “If political figure A is like this, it basically means they could also be like this absurd thing, which is stupid.” However, if your satirical piece comes across as merely “extreme but plausible,” then the “satire” part hasn’t hit home. People who already agree with the critique the satire was intending are merely outraged and the people who disagree with the critique don’t notice that a critique has been made. You haven’t actually satirized, you’ve just made something up.

Granted, lots of people get confused by good satire, too. The Onion frequently gets angry e-mails from people who thought their articles were factual. Some folks out there thought the “Stephen Colbert” of The Colbert Report was actually a conservative. Obviously, satire is not for the dull-witted. However, satire needs to wink at the audience at some point. They need to realize that this isn’t real, but is making a point through absurdity. Any reasonably well-informed person should be able to tell the difference, even if at first they are confounded.

I’ve been seeing lots of bad satire lately. Saw a piece the other day claiming Mike Pence didn’t want to use the word “vice” in Vice President because of religious grounds. The article barely had any indication that this was false, and even though it seemed extreme, it wasn’t so extreme that it was impossible. The article included links to actual events, which merely obfuscated things further. It was by a Journalism professor. The winks to the audience, such as they were, were so subtle as to fail to qualify. It was only after looking at the author’s other publications on the Huffington Post that you could see the pattern – this guy is a satirist. Just a bad one.

Part of the trouble, I fear, is because our current political climate is pretty absurd to begin with. It’s hard to get crazier than Trump, and satire is a challenging business in any event. Nevertheless, now is the time for satirists to shine, and shine they must. If they don’t, nobody will know they were there until Snopes posts a declaration, and by then their message will have been lost in the scramble. As E.B White once said:

Explaining a joke is like dissecting a frog. You understand it better, but the frog dies in the process.

Posted on September 21, 2016, in Critiques, Theories, and Random Thoughts and tagged humor, parody, satire, The Onion. Bookmark the permalink. Leave a comment.

← Read “When It Comes Around” on Perihelion SF!
One-on-One: The Dramatic Importance of the Duel →