(Looks out window) Whoah. Looking pretty ugly out there in the real world. Politics just got a bit scary, and a lot of people are pretty convinced a lot of bad things are about to happen. In this time of fear and anxiety, what is a person to do if they are expected to maintain their sanity in the face of catastrophe?

This is a pretty old story.

Well, that’s what fiction is for! Curl up with a good book or throw on the TV and try to escape for a few hours.

Of course, then you’re probably going to see or read something about empires. Or rebellions. Or both. Sometimes those empires and rebellions are literal things (e.g. Star Wars), sometimes they’re a bit more metaphorical (e.g. Footloose), but you’ll be hard pressed to escape the narrative structure provided by the simple tension between the powerful and the powerless or, more simply, between the in-group and the out-group. This, I’m sure, isn’t a revolutionary statement (pun intended): this stuff is woven throughout our culture – throughout all cultures, really. It’s one of the truly, truly basic stories. 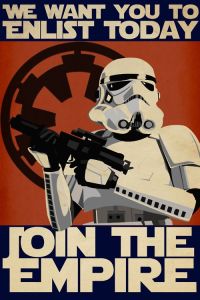 On the one side you’ve got the Empire. The Empire is the source of power, the seat of wealth, the axis around which the world of the story orbits. The instinct is often to insist that such power is innately evil, but it is portrayed positively almost as often. Consider the average Western, for example. While I haven’t done an intensive survey, I think it’s pretty likely that the number of heroic sheriffs and marshalls (symbols of Empire, or in-group power) is approximately even with the number of heroic outlaws and vagabonds (symbols of Rebellion, or out-group power). The Empire, while big and powerful and potentially scary, is also orderly and cultured and wealthy and safe. Coruscant and Naboo are a lot nicer than Tatooine or Hoth or even Endor’s Forest Moon.

Stories told with the Empire as villain typically display how the Empire can crush dissent, disenfranchise minority groups, or dominate cultures – all of these, of course, drawn from our collective experiences of actual history. These stories resonate in particular with those who feel alienated from the Empires of their own real lives, whether they are actually part of the out-group or whether they have chosen to sympathize with those who have been designated as “other.” I’ll talk a bit more about this when discussing Rebellion, but the underdog is a powerful target for audience sympathy and often has been across the history of literature.

Empire, however, can also be the hero in a story. In these cases, the Empire is typically cast as the defenders of peace and justice against some kind of barbarous hordes. Starship Troopers is an excellent example of this, but it is by no means alone. There is safety and stability in Empire and, even with the conformity that accompanies it, that is a heartening thing. Star Trek favors Empire over Rebellion (the Federation, as demonstration of the in-group, is always securing its goals in the face of barbarous Klingons, Romulans, the Dominion, the Borg, etc..), and this draws attention to the fact that Empire need not be oppressive in any sense we recognize. It must only hold the reins of power and designate who can and cannot belong. Other Empires-as-heroic tropes include an awful lot of Victorian colonial literature, the vast majority of the Arthurian Legend, every heroic cop movie ever made, and any war movie that features patriotism as a positive or redeeming feature (so, in other words, about 90% of all war movies).

Now, opposed to this you have the Rebellion. The Rebellion is the out-group – those bereft of power or wealth or (frequently) culture. They exist on the fringes or between the cracks of the Empire. If Empire is a force for stability and stasis, the Rebellion is a force for change. Their goal is to upset or subvert the social order. They are your outlaws, your ne’er do-wells, your poor, your vagabonds and wanderers. Your freaks and weirdos. The instinct, in the case of Rebellion, is one of sympathy. We have all felt marginalized in one sense or another in our lives, and our frequent desire is to see those who are harmed by the in-group find a way to subvert the power structure and have justice be served. This, of course, is not always the case: we revile rebels as often as we laud them. Take, by way of real-life example, global terrorism or ISIS. They are, by all measures, the out-group. We are not inspired by their underdog struggle to subvert the power of Empire (i.e. us) because we do not share their goals or morals. They are the barbarous hordes, not the inspiring resistance (even though, by the account of at least one CIA interrogator, they view themselves in this way).

Stories told with the Rebellion as heroic tend to emphasize the overthrow of dictatorial regimes through noble struggle and self-sacrifice. They value the individuality of their followers, they emphasize freedom and self-reliance over safety and wealth. When Han Solo tells his commanding officer on Hoth that he has to leave, the general gives him a handshake and a pat on the back, but when Captain Needa apologizes to Lord Vader, he is strangled to death for his efforts. Such is the narrative of the heroic Rebellion: we will save you from your oppressors. Look at any list of quotable lines from Firefly and you’ll see this sentiment played out in exhaustive detail. They might be filthy and rowdy and quirky and poor, but the crew of Serenity are the plucky underdogs we love and the Alliance are the soulless Imperial types we loathe.

Of course, the Rebellion need not be the hero. One of the interesting things that Star Wars does is flip the Empire and Rebellion roles throughout the series. At the start, the Republic (the in-group) needs to be protected against subversive influence (the Sith and their Separatist tools) whereas, by the end, the Sith-controlled Empire (the in-group) seeks to…well…protect itself against subversive influence (the Jedi-aided Rebellion). The roles are the same, merely our sympathies switch.

That, I think, is an important lesson to glean from all of this: in-group and out-group do not, by their very nature, acquire the veneer of heroism inherently, but rather by whether or not our own beliefs and priorities are represented by one of the groups or the other. Furthermore, and just as importantly, in real life the sides of in-group and out-group are seldom so morally simplistic that there is one that is always superior to the other. Life, unlike fiction, is often too messy to make easy judgements. So, as we go forth into this new world, some of us who thought we’d be the in-group are now filthy rebel scum and others who assumed they’d be the out-group have taken on the mantle of Imperial power. This will have a powerful effect on the stories we tell from here on out, and make no mistake.

Posted on November 16, 2016, in Critiques, Theories, and Random Thoughts. Bookmark the permalink. 3 Comments.