← The Coattail Hypothesis
Danger Patrol: To Protect and Serve – Roles →

But What’s In the Box?

I’m in the middle of reading The Night Circus by Erin Morgenstern. It’s beautifully written and has a really interesting and unique premise and, as I haven’t finished the book yet, this isn’t going to be a review, exactly. Mostly, reading the book has reminded me of an interesting complication when trying to deal with the mysterious in your writing.

Throughout The Night Circus, there is some kind of mysterious “competition” going on, the details and purpose of which is unknown to the reader and even unknown to the participants. It is, apparently, the driving conflict of the book and the central mystery of the plot, but here I am, halfway through, without any real idea what it is. That worries me.

Mysteries are double-edged swords. They draw the reader in and are also key to creating suspense. The longer the mystery draws out, the more intriguing the solution seems to be. However mysteries, once revealed, lose their magic. There is a danger, therefore, that the longer you draw out the mystery without revealing it, the more disappointing the reveal will be (or the more difficult it becomes to create a satisfying reveal).

There is a clip from Weird Al’s UHF that always comes to mind when I think about this problem:

Weaver, the contestant, is drawn in by the mystery of the box. Indeed, we all are – that’s why the mystery box is a thing in game shows – but the box, in this case, contains nothing at all. The reveal is a let-down and what makes it funny is that it is a deliberate one. UHF is mocking television conceits – it’s the crux of the whole film’s humor – but I also think the warning here is weirdly instructive: just because it’s mysterious, doesn’t mean it’s worth discovering.

So, back to The Night Circus and, by extension, writing in general. The thing that worries me about the central mystery of The Night Circus is that, once I get the reveal, it won’t end up being very interesting at all. It will break the magic that the rest of the book has worked so hard to construct. Now, part of me thinks that maybe this is intentional  – the book is all about a magical circus that creates an artificial environment through mystery and subtlety – and that maybe Morgenstern is setting the reader up to have their illusions crushed (and no spoilers, please). However, even if so, that means Morgenstern is deliberately mining the precise pitfall I’m trying to elaborate, here. 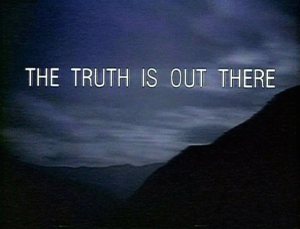 Sure, yeah – I get that. But how long do you expect us to care?

Perhaps some more instructive examples will help explain what I mean. The two most obvious ones are the two mega-hit shows The X-Files and LOST. In The X-Files, we are introduced to the idea that there is some global secret conspiracy to conceal the existence of aliens to the public. This is central to the show, and drives it through most of the run. However, every time Mulder gets close to the truth, it gets stolen away again. This works to create great drama through the early part of the run. However, at some point it lost steam. We kept wondering what was in the box so long that, once the box was opened and we looked inside, we just saw a bunch of old, nebulously rich dudes and, well…it was a let down.

The trouble was, ultimately, that Chris Carter (show creator) let the mystery drag out for too long. So long, in fact, that there was no possible reveal that could justify the delay. Instead of having a revelation that rocked our world, we instead just shrugged. That was it? 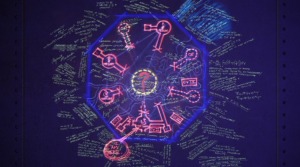 How mind-blowing was it when you first saw this? I mean, seriously, right?

LOST sought to sidestep this problem by solving mysteries only to lead to larger mysteries. So, yes, they opened the box (literally, in the case of the Hatch) only to reveal another box. This was pretty brilliant, by the way. However, this was ultimately just an act of grand misdirection: the show got most of us to stop asking “what’s with all these boxes” and instead trust that newer and more interesting mysteries would keep revealing themselves until it all made sense.

Of course, the creators of LOST never actually planned to or cared to connect or make sense of all their mysteries. They just kept showing us more and more boxes until the whole thing refused to make any sense and then expected us to just shrug and accept that “life is a mystery.” Yeah, no – if The X-Files disappointed its audience, LOST deliberately cheated it. I still enjoyed that last season, mind you (the character arcs were perfect), but the mystery aspect of the show was a grand betrayal of everything much of the audience had invested.

So, okay – mystery is hard to balance. How, then, do you do it well? I can’t claim to be an expert, myself (though I do try), but generally think the key is that you have to reveal your mysteries before the payoff is eclipsed by the build-up. You can either do this by having a very subtle build-up (The Usual Suspects) or by revealing the great mystery about halfway through (the original Star Wars trilogy). You could even, perhaps, do what LOST was doing, except instead of throwing up your hands and not solving anything, you could roll up your sleeves and try to come up with the most God-awmighty big reveal in the history of storytelling.

But yeah, good luck with that one. No, “they’re all in heaven” isn’t an acceptable plot twist. Nor is a glowing Jacuzzi.

← The Coattail Hypothesis
Danger Patrol: To Protect and Serve – Roles →