Rogue One and World War 2

Note: The movie’s been out a few months now, so any spoilers you stumble across herein are your own damned fault.

I loved Rogue One. It is my favorite movie in the Star Wars franchise short of Empire Strikes Back, just edging out Return of the Jedi for the second spot. A lot of people didn’t like it as much though. They are, of course, entitled to their opinion, but I think the movie deserves an explanation for the root of my glowing praise. So, let me answer the movie’s criticisms with why I feel those perceived weaknesses are actually strengths.

Critique 1: It Didn’t Feel Like a Star Wars Movie 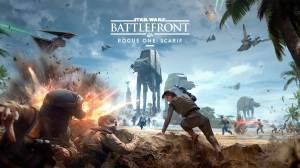 First off, last week I explained how I felt that Lego Batman was a miserable slog primarily because the source material has been permitted to stagnate. Same thing has been happening to Star Wars for some time now. My chief criticism of The Force Awakens is that, while I love the characters, the plot of the movie was formulaic, dull, and often nonsensical – Abrams is just pushing the buttons labelled “Star Wars” and not really doing anything new and interesting in terms of plot, setting, or even dramatic tension. Star Wars, it is assumed, has to be a family story about the mystical struggle between the Light and Dark Side. Throw in an alien monster (at least 1 per movie, every movie), one lightsaber duel, one space battle, and one commando raid of some kind and I’ve just described every single Star Wars film with two exceptions: Empire Strikes Back and Rogue One.

Rogue One is not a family story. It’s not even a tale of good vs evil. It’s a war movie – specifically, a straight up homage to World War 2 movies like The Dirty Dozen, Where Eagles Dare, and The Guns of Navarone.

This is a story about a bunch of rag-tag commandos with conflicting priorities who team up to to take out a fascist superweapon and, in the process, almost all die. They gun down stormtroopers. They go undercover. Get locked inside restricted facilities. They fight on top of high towers and/or mountains. They have a sniper. There’s always one dude you aren’t sure you can trust. The mission seems impossible. No one will remember their names. And on and on and on…

We always knew the Empire was the Nazis, but this is the first movie to actually show what that means.

Yeah, it’s not your average Star Wars story, but it’s a story that makes all the other Star Wars stories (1) make more sense and (2) gain a greater sense of what’s at stake. The Empire is depicted in its full brutality here in a way the other films don’t bother. We get a broader sense of the scope of the world and the risks people have to take. So, no – there are no Jedi, no Skywalkers, no glorious victories, no larger-than-life stunts. It’s regular people trying to do incredible things. I love that.

Okay, on the one hand I can see what you’re saying – they could have done a better job in some spots of making these people more rounded and involved. That said, I actually liked the stripped down character development they got. First off, I don’t think the character development was weak, in particular – it just asked you in many places to draw your own conclusions. These aren’t people who discuss their feelings regularly anyway, so there was no Luke-and-Leia-on-the-Forest-Moon confessionals. For what it’s worth, I understood their motivations just fine. I know why Cassian didn’t shoot Jyn’s father. He wants to believe Jyn is right – he doesn’t want to kill innocent people anymore. It eats at him the whole movie. Does he come out and say this? No. He never does and, yeah, its unclear. Hell, I could be wrong (though I don’t think so).

Then again, what is gained here is that this movie allows us to connect with the characters not as characters but in the sense that they can (and are supposed) to be ciphers for us to occupy. This was the same tactic used in those World War 2 raid movies – character development was always sparse, and it was sparse to allow the audience (many of them actual WW2 veterans) to put themselves in the shoes of the characters. You don’t really give a crap what Clint Eastwood’s character’s name is in Where Eagles Dare. You just want to picture yourself with the MP40 gunning down Nazis.

In this same way, I submit to you the following: Rogue One is the film impersonation of every single time you and your friends pretended to be soldiers of the rebellion on school playgrounds from around 1980 until 1990 (with some variation given your actual age, of course). I know me and my friends used to play as rebels getting blown up (and blowing up) stormtroopers in my backyard for years and years. Did our “characters” have names? Not really – we were “the guy with the super-huge gun” and “the guy who knows jedi powers but isn’t a jedi and, oh yeah, he’s blind and really cool.” It’s that. They made a movie about that. Yeah, the character development isn’t super deep, but it doesn’t have to be to get the job done.

Okay, first off: debating “realism” in Star Wars is a ridiculous place to start from. I’d follow up with this: if you gave this movie crap but didn’t get frustrated by The Force Awakens, you’re being a raging hypocrite, because this movie made vastly, vastly more sense than any single part of that movie.

But okay, let’s entertain the debate for a moment. Why is it so hard to get the Death Star master plans, anyway? Here are my suggestions:

There, settled. Now it’s your turn to explain to me how the Starkiller Base is supposed to work, how some fringe group built it, and why it’s so damned easy to blow up, and the astrocartographical phenomenon that allowed people in star system A see the explosions in system B as two distinct points of light rather than one tiny blip.

Overall, I loved this movie. It was tense, it was different, and it makes me like all the other movies more, which is itself a reward for watching that I wouldn’t have gotten otherwise. I hope to see more like this – more departures from the Star Wars script, more risks being taken to make the franchise last and be fresh and interesting. More franchises could use such treatment.