← The Curious Case of Too Much Weird
Current Status: AHHHHHHH!!! →

Nostalgia Vs Homage: Ready Player One and Stranger Things

As my summer reading-for-pleasure run continues, I’m in the midst of Cline’s Ready Player One. I’m enjoying it – certainly more than my last half dozen reads or so – and this bodes well. There is, however, one (fairly large) aspect of the book that I’m not enjoying half as much as I feel I should, and I kinda want to talk about that. It has to do with the 1980s. 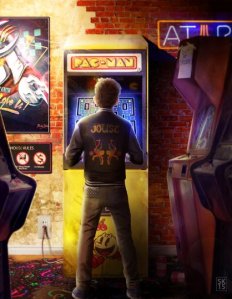 Now, I’m a bit younger than Cline, but not by a lot. I remember the 1980s well – they were my childhood. So far, I’m picking up just about every 1980s reference the book is laying down (which is a LOT) with the possible exception of Zork, which was a bit before my time. I’m getting the impression (and have picked up from others) that this incessant river of 80s nostalgia is part of the book’s appeal. But, like, it isn’t really doing anything for me. I mean, I nod my head every so often and think to myself “oh, right – WarGames. I should watch that again,” but I do not, myself, feel anything upon the reference to WarGames. Reciting dialogue from the movie does not have the same feel or magic as actually watching the movie.

And this is where I think the book is failing to grab me: I love the 1980s, but I don’t especially love a non-stop discussion about how much I love the 1980s. That kind of nostalgia-based story doesn’t grab me, because it does not, in and of itself, actually do anything but reference the existence of some other story I liked. It’s like watching a clip show of your favorite show in lieu of an entirely new episode.

Now, to its credit, Ready Player One does have its own story and its own characters and plot and so on, and the aspects of the book I’m really enjoying are entirely in those parts. The problem develops when we have a five paragraph explanation of a movie I’ve seen dozens of times and then I have to be led through it all again, scene by scene. Cline does his best to get through these things with efficiency, but the fact is that I’m not so much getting a new story as a re-shoot of a classic thing I’ve known since childhood. I don’t really want to play through the Tomb of Terror again, since I’ve already done that before.

What I’d really prefer is a story that takes the elements of the movies and stories common to the 1980s that I enjoy and see those elements used to make a new story in the same loose genre. Ready Player One is, on some level, telling a “1980s” story in a number of ways (the love interest, the down-on-his-luck kid, the evil rich guys, etc.), but it isn’t doing it as well as I feel Stranger Things does, and that’s because too much of Ready Player One expects me to cheer when they reference Joust or Back to the Future without actually replicating the emotional content or importance of either of those properties.

Yes. More of this, please.

Now, in Stranger Things, I felt real, actual nostalgia. The film looks, feels, and sounds like the movies and books I watched and read as a kid. However, it does all of this without constantly bashing us over the head with “ain’t the 80s cool” stuff. Yes, yes, many of the camera shots are direct homages to Spielberg and Zemekis and others. Yes, a lot of the elements are things we’ve seen in Stephen King novels or Richard Donner films. However, the show is not actually about any of those things. They are incidental – they’re establishing a mood, but the mood is not the main course. Even if you don’t pick up any of those references, the story is, in and of itself, emotionally compelling and interesting. This is in large part because it is telling the kind of story that is emotionally compelling in a similar way to its forebears. It is not, however, a simple retelling of any one story, nor is it a ripoff or shallow imitation. It is a new, legitimate entry into a genre of film that has been somehow forgotten.

The same, unfortunately, can’t be said about Ready Player One. If you don’t get any of the references, a significant aspect of the plot and action is going to be lost on you. Yes, Cline does a pretty good job of trying to get you up to speed, but if there is no actual preexisting emotional attachment to the things referenced, the book isn’t going to work half as well as it should.

Here’s another way to look at it: we are currently as far away from the 1980s as the 1980s were from the 1950s. So, let me ask you this question: does Back to the Future still hold together as an interesting, emotionally compelling film even if you don’t know jack about the 1950s? Of course it does! Because, even if you don’t get the “Marvin Berry” joke, more or less everything of significant import in that film is relatable to anybody. Now, if, on the other hand, the movie asked us to follow along as Marty went through an incessant primer on 1950s scifi from his father, all the way to the point where he began summarizing Asimov’s Foundation and Marty started quoting passages, you’d lose the audience. Because at that point you are more interested in making references than you are in telling your own story, and story always has to come first.

Posted on June 12, 2017, in Critiques, Theories, and Random Thoughts and tagged 1980s, Back to the Future, Ernest Cline, nostalgia, Ready Player One, Stranger Things, writing. Bookmark the permalink. 6 Comments.

← The Curious Case of Too Much Weird
Current Status: AHHHHHHH!!! →