Read “The Masochist’s Assistant” in this month’s F&SF Magazine!

Adding to my joyous publication news, I’d like to draw your attention to the July/August issue of The Magazine of Fantasy and Science Fiction (F&SF) wherein you will discover my story, “The Masochist’s Assistant.” 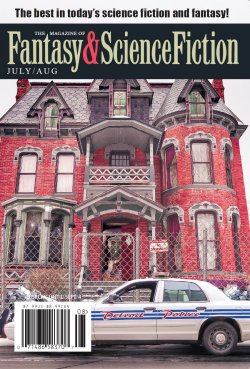 I’m pretty proud of this one, folks, and I’d love for you to read it. Set in the same world as Tyvian Reldamar, it tells the story of a young Akrallian famulus and his struggles to cope with the master mage who employs him to assist with his various plans to commit suicide and then resurrect himself. Sounds fun, eh?

But it’s not just me in there! There’s a whole host of other tales by extremely talented authors whom I am privileged to share a table of contents with. I haven’t finished it yet, but so far:

There are two more stories I’ve yet to get to yet, but both of them look pretty cool and I couldn’t wait to blow the trumpets on this one. Go get it! There’s book reviews, too, and a ton of other stuff.

You can subscribe to the magazine through their website and it can also be found on Weightless Books or on Kindle via Amazon. If you’re just looking to buy the paper copy in person, though, it is carried in most Barnes and Noble locations nationwide.

Go and check it out – you won’t regret it!