DEAD BUT ONCE – Out Today!

Hey, all! I have a suuuper busy day today, so this will have to be brief:

The third book in THE SAGA OF THE REDEEMED releases today in e-book! Go and get it now! 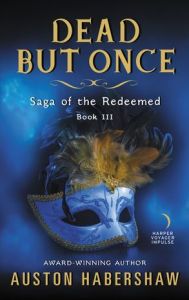 Out in e-book today!!

Not convinced? Well, then listen to this:

A brilliant schemer never rests, but for Tyvian Reldamar, he might finally be over his head. The Saga of the Redeemed continues with Dead But Once, Auston Habershaw’s latest fantasy following The Oldest Trick and No Good Deed.

For him, he’s reached the pinnacle of all he’s really hoping to achieve: he’s got money, he’s got women (some of which aren’t even trying to kill him), and he’s got his loyal friends and family nearby and safe.

Because this is Eretheria, a city known as much for its genteel aristocracy as for its diabolical scheming. Long without a king, the scions of the ruling families scrabble for control–including levying cruel taxes and drafts on the peasantry in order to wage “polite” wars against each other.

And now, of course, Tyvian is finding himself drawn into it.

With a swashbuckling flare, old fans and new readers alike will be swept up into this world of magic, crime, and political intrigue where life is cheap and justice too expensive.

Now, I wrote this book so that people new to the series could follow along, but if you’d rather catch up (and I recommend it) you can find links to the first two books (THE OLDEST TRICK and NO GOOD DEED) right here on this blog. Otherwise, what are you waiting for? Go and get it! Experience high adventure, conspiracy, plots, balls, and all the great times such things entail!

Posted on April 17, 2018, in Fiction, Publicity. Bookmark the permalink. Leave a comment.