← Yes, You Will Be Rejected
The Far Far Better Thing: Pre-order NOW! →

I have a hard time with alternate history as a genre. It isn’t that I mind entertaining the idea of alternate realities, but rather that I more broadly dislike what alternate history most commonly means: it means that the Nazis won the war. 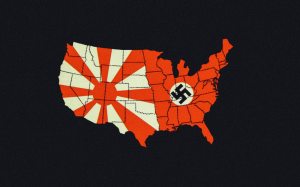 What is with this shit, anyway?

And yes, I know it’s not always the Nazis. Sometimes it’s the Confederacy. Or the Soviets. Or the Romans conquering the Earth. Sometimes Nixon is still president. But you know what it almost never is? JFK eluding assassination (Stephen King’s novel excepted, I guess). It’s never women getting the right to vote in 1812 (or always having the right to vote!). It’s never the Native Americans kicking out European settlers right from the get-go and continuing their civilization uninterrupted. And sure, sure – just by writing this, people are going to start pointing out novels where all of these things have happened, but you know what I mean, right? They aren’t the majority. They don’t attract much attention.

No, it’s usually the Nazis. Look, I know they make good bad guys, but there’s lots of ways to have Nazis running around without invalidating the hard-won victories of the Allies in WW2. Guys, that war wasn’t close – the Allies didn’t win that thing by the skin of their teeth. We freaking murdered those goose-stepping shits. We ground their fucking army into dust. We filled their hateful ruler with so much despair, he shot himself in a bunker rather than be taken alive. And it was glorious – evil was not just beaten back, it was utterly, completely vanquished. Sure, sure – we’ve got Nazis goosestepping around all over the place today (hell, look at the current US administration!), but the cold hard fact is that they lost big time last time they tried this shit and I have always taken comfort in that.

So when a book or show or movie comes along and decides to chuck that out the window for the sake of a metaphor, I get uncomfortable. I just don’t like it. I guess maybe I’m just not a fan of dystopias. There’s more to it than just that: I also know that there are people out there – real, actual, living people – who deep down wish the South had won the Civil War and insist to themselves that the CSA would have freed their slaves eventually anyway and so on and so forth and these dystopias aren’t so much dystopian to them as utopian.

And that turns my stomach.

There are people out there watching Man in the High Castle and admiring Rufus Sewell’s uniform and fuck that. His character is a goddamned Nazi. He isn’t cool. He isn’t someone we can or should identify with. He’s the closest thing to the embodiment of pure evil we have on this planet and he isn’t even entirely fictional. People like him do exist and did exist and will exist again and maybe this is very close-minded of me, but I don’t want to sympathize with them. Not ever. It creeps me out how hard people want to try.

And then there’s another level to it, too.

As a white American male, I have a certain comfort with the arc of history as it has played out. History, after all, has been very good to people like me. It is an aspect of my privilege that I can look back on history and feel like the good guys have won. I know that I’m wrong, by the way – white men have been the villains more often than they’ve been the heroes, on balance – but I think there’s a deep-seeded level at which monkeying with the timeline makes me feel insecure and uncertain and afraid. And I guess that only means that it makes me feel as vulnerable as everyone else always has felt. This is not a pleasant feeling, as much as I recognize the importance of me feeling it. It’s just that I’m not going to actively seek out this feeling as part of my entertainment.

Furthermore, this is probably why the white men who dominate the alternate history genre are so often resurrecting the boogey-men of Western Euro-centric history – because fighting those old battles over again make them feel more comfortable than figuring out their place in the new battles that are brewing. And, of course, some percentage of those white dudes ultimately sympathize with the side that was wrong.

So go on and enjoy your Nazi dystopias and modern day confederacies. Just leave me the hell out of it.

Astute eyes may have noted that Book 4 of The Saga of the Redeemed has been pushed back to release in March. Sorry, sorry – things have been crazy at my publisher and they had to push it back. I expect to be finishing up edits on the book in the next week or two and will have a whole pre-order teaser/back copy reveal soon, so watch this channel! Thanks to everyone for your patience!

← Yes, You Will Be Rejected
The Far Far Better Thing: Pre-order NOW! →