← My Schedule for Boskone 56
Interviews, Sales, and Writing News →

This is it! The Far Far Better Thing, Book 4 of The Saga of the Redeemed, is available today from all e-book retailers! In other words, the fantasy series that I imagined and started writing almost ten years ago has finally culminated in 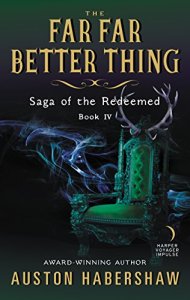 Auston Habershaw’s epic fantasy series, The Saga of the Redeemed, which began with The Oldest Trick, comes to a powerful conclusion in The Far Far Better Thing.

War has come to Eretheria.

With Tyvian Reldamar feigning his death, the forces that still carry his banner are left to fight a vicious battle against the warlord Banric Sahand and the noble houses that flock to his side.

Led by Myreon and Artus, this band of freedom fighters and angry rebels is faced with an enemy the likes of which they’ve never faced before: one who will do anything, no matter how brutal, to secure victory.

Having had his fill of death, Tyvian tries to run away from the war fought in his name, but it just isn’t that simple. With his mother held prisoner, Artus and Myreon in grave danger, and Xahlven pulling the strings in the background, the ring drags Tyvian to return and set things right.

But how can one man fix a world this broken? And what will be left behind when the smoke clears? No one can say for sure.

Least of all Tyvian.

I’ll have more to say about this at another time, when I can gather my thoughts, but I’d like to at this point offer a massive, heartfelt thank you to those fans of mine who have stuck with Tyvian through all his trials and tribulations – you are the absolute best, and this absolutely would not have been possible without you.

I’d also like to thank my wonderful beta readers – Katie, Brandon, and Jason – for keeping me sane and pointed in the right direction.

And, of course, my agent Joshua and editor David, also without whom there would be no book.

Now get out there and get reading!

← My Schedule for Boskone 56
Interviews, Sales, and Writing News →