Vrokthar is Disgusted at Thy Inferior Boasting!

Behold, it is I, Vrokthar, Scourge of the Northern Wastes! I have once more emerged from my winter feasting, the stores of my longhouse long since depleted, and the meatier of my servants devoured. I look upon thy lands with a hunger that may be sated only by the screams of the cowardly, and soon will my ravaging hordes ride forth in battle.

First, though, I caught up on thy many professional sporting events, wherein you weakling fools pretend to be warriors for a limited period of time while maneuvering various spheres past various posts and, for some reason, slaughter no one and leave their weapons behind. Of this I have proclaimed my displeasure before, and it is not Vrokthar’s mighty purpose to repeat himself. No. There are other things that must be declared the farce that they are.

What is going on with post-game “entertainment?”

At first, Vrokthar assumed this would be an hour-long victory celebration, where we would watch the victors divide the spoils of their conquests, make merry with one another, and heap insults upon vanquished foe all while boasting that still greater victories were to come. This would be a worthy use of time, as few enjoy a good boast more than Vrokthar the Unspeakably Mighty and Crusher of Mountains. Ask any of my thanes, and they will tell thee that my hall is thick with the smoke of roasted meat and the roars of drunken warriors, describing their feats.

But this…this “post-game” nonsense was nothing of the kind. It was merely prattling bards asking idiotic questions of blank eyed athletes: “How did you think you did today?” and “What are you going to do to win next time?”

And their answers? Drivel! Garbage! Useless swill! “We worked real hard” these imbeciles relate, as though a man sweating from physical exertion to the point where he seems to have been greased like a pig has just enjoyed a leisurely stroll. “We went out there and we gave it our all and it was close, but we won.” OBVIOUSLY, you half-drunk donkey! We just witnessed this thing! Is this all you have to give us? Is this the extent of your insight?

Mayhap we should make these faux-warriors excuses – they are not employed to be great speakers, but great workers of deeds. Leave it, then, to the bards of your indolent society to make them seem mighty. And yet, AND YET, these puttering, puerile sycophants add even less to the meager boasts of their pathetic champions! “Did you see the way he moved his feet,” says one, as though being in motion and moving one’s feet could be exclusive states. “I mean, the reason these guys keep winning is they keep putting it in the goal.” OBVIOUSLY, YOU INCOHERENT SWINE, AS SUCH IS THE OBJECTIVE OF THE GAME! 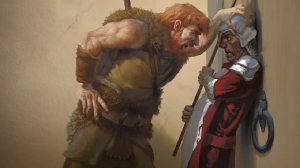 Vrokthar knows how to talk trash. LET NO MAN DENY IT!

What has become of the vigor of your people, wetlanders? How can it be that here, even in the midst of what passes for glory among your kind, can you be such wretched wastes of time and space and energy? Were Vorkthar to win one of these so-called “playoffs,” you would not find him shyly mincing words in the room-of-small-closets. NO! Vrokthar would be drinking deeply from the helm of his defeated foe! He would steal from the vanquished their livery and cast it down before the fawning masses. “BEHOLD,” sayeth he, “THE FATE OF THOSE WHO FACE VROKTHAR IN BATTLE IS FORETOLD!” Then there would be urination and the speaking of mighty oaths. I would swear to those present that upon the next meeting, I should slay their captain in open combat in center ice and, when the referees came to detain me in the Box of Ignominy, they too would be slain. And then the goals I would score would mount unto the heavens, so numerous would they be! The Scorekeeper would expire from exhaustion, and him too I would skin and mount upon my wall, so that ever afterward, when Vrokthar stood upon the field of contest, the other teams would weep and gnash their teeth and Vrokthar would be given ten goals as an offering to sate his eternal, volcanic rage, lest it melt the ice itself and the whole game be for naught.

Even now, as I speak these words, there are those among you who grow angry. “This cannot be said,” you say. “It is wrong, it is impolite, it is inaccurate.” Fools, I say! This is the point of boasting! Laugh in the face of thy foes, weaklings! Scoff at their warriors, scorn their pride –  drive them to madness with your mighty speech. And if you were to lose (which obviously would happen often, because you are as a whole are an impotent and incompetent species), what of it? You would be shamed, and rightfully so, for those who are vanquished should be ashamed of themselves. And then you may plot vengeance! See, wetlander imbeciles? The fun never ends!

Methinks your post-game sports foolishness would be greatly improved by Vrokthar’s reforms. Nay, it is certain to be so. Go and see that these changes are done, or face my inestimable wrath.

So I hath spoken!