Cutting to the Chase

Writing a novel is a balancing act. You’ve got to balance exposition with action, description with dialogue, you’ve got to balance multiple character arcs and the needs of the external conflicts and the internal conflicts and lots of other stuff, too. Go too far in one direction and you wind up with a book that is either boring or one that is too frenetic to follow. It will come as no surprise then if I tell you that doing this well is hard, hard work.

When I write a novel (and, I would guess, when a lot of people write novels) there are certain scenes, sequences, or sometimes even specific lines that I know I want to show up in the book. They are the tent-pole scenes – the ones that hold up the rest of the story. The pivot points of tension and reward, of strike and impact (to borrow a phrase from this excellent craft thread from @dongwon) circle around those scenes.

Now, really intense reads – the books that really have you turning pages, that have you staying up late to finish them – have the best tent-pole scenes. They are constantly drawing you from crisis to crisis, giving you a helpless sense of being drawn along through events. A book, though, can’t be nothing but those scenes – it’s impossible. You can’t have nothing but car chase, because very quickly the chase scenes stop mattering (for reference, watch the second Matrix film). You need to build tension and you need to set the stage for the chase. The more understood the stakes are, the more powerful the payoff will be.

The trouble though, is how much buildup do you need? When I’m writing the first draft of a novel (as I am now), I get bogged down sometimes in preparing for the big scene to happen. I know it needs a stable platform to stand, so I just keep shoring up my foundations, over and over and over, until its clear I’m wasting time. In revision, I trim a lot of this buildup out, keeping the bare essentials – balancing set-up and payoff, essentially. This is a challenging process because it is difficult for the author (who has had this pivotal scene in their head for possibly years) to know if the scene is landing for a stranger.

If only we could just keep the car in the air, right? Drag that sense of freefall out for 300 pages. Yes.

Often I feel I’ve missed the mark – I get feedback from readers and editors who say things like “why is this happening” and I’m like “DUH, CAN’T YOU READ MY MIND?” Naturally, I’ve got to go back then and fill in blanks that I didn’t know were there. This sometimes feels frustrating – I feel like I’m back where I started, wasting everyone’s time. Let’s be honest, if it were possible, we’d like to write nothing but chase scenes and pivotal battles and emotionally wrenching death scenes and stuff. “All Killer and No Filler” as they say.

You can point to various thrillers and action-packed reads and say “see! They did it!” What isn’t commonly realized, though, is that the “filler” – the set-up, the build – is still there. It’s just done so elegantly that you don’t notice. They have just enough to make the action land, but not so much that you get bored waiting. In other words, they balance it perfectly.

I can’t say I quite do this to my satisfaction, yet. But I’m working on it.

For the Love of the Chase

I can describe the smell of burning rubber, but does it get the adrenaline going then?

I love chase scenes. I love watching them in movies, I love seeing them on TV, I love reading about them in books, and I love running them in RPGs. There is, however, a problem:

I am a writer, not a movie director or a TV showrunner, and chases are goddamned hard to make work in fiction. The act of description (of showing not telling) runs at odds to the pacing of a good chase. You want the chase to rocket from one moment to the next, you want the reader on the edge of their seat as the chasers/chasees teeter ever closer to disaster as they veer in and around the obstacles set in their path, be they pedestrians, ancient Roman pillars, cliffs, or what-have-you, but describing that in sufficient detail becomes a very delicate balance. Not enough and the reader can’t see what you are trying to convey and too much means the whole things slows down.

I’ve been trying to think of chases in books that work the same way that scene from Bullit does or the ones in any given Fast and the Furious movie. Hell, even the foot chases from The French Connection or Casino Royale would be acceptable. I’m having trouble thinking of one, honestly. There’s the pizza delivery scene in Snow Crash, which is cool (but not really a chase) and Hiro Vs Raven on cyber-cycles (which is okay). There’s some stuff in Tolkien, but Tolkien is anything but an ‘edge of your seat’ writer.

Maybe I’ve struck upon something here. Maybe I just don’t read enough of the right genres for these things to pop up consistently. In any event, I’m going to keep trying to figure out the chase and put it in my writing. ‘Edge of the Seat’ is sort of my fiction-writing mantra in many of my projects, and the chase is a key element of any good suspenseful storyline, I think. Chasing and being chased is an ancient and instinctual activity. We dream about it constantly; the thought of the hounds at your heels, baying into the night with the scent of blood in their nostrils, is the stuff adrenaline surges are made of. The fight or flight response is some healthy, powerful dramatic material that needs dredging from time to time. The ‘Fight’ part is well-established in fiction, but where would it be without the flight? Without that sensation of chasing down your enemy, stretching your fingers out to seize his traitorous throat, only to feel your fingertips graze only the hem of his jacket?

I think there’s a little bit of poetry in action scenes, be they chases or otherwise. Good writers need to embrace that balance of economy of diction with properly evocative turns of phrase in order to elicit dramatic effect. It’s damned hard work, but rewarding if you get it right.

Or, at least, I presume so. I’ll let you know when I feel I’ve gotten it right.

Why They (Should) Fight

Are you ever bored by action sequences? I am. As much as I love action movies, dig a good scrap between hero and villain, and adore edge-of-your-seat stunts, I often find myself bored or underwhelmed by very technically advanced and well choreographed action in movies and, indeed, in books and comics as well. Where one film can blow twenty million dollars on some special effects extravaganza involving two guys wrestling on top of a moving plane in the middle of a dogfight and fall utterly flat, another movie can have a simple brawl in a bar that takes my breath away. So, what’s the difference? Well, quite simply it boils down to emotional investment in the stakes involved.

The same rules that make good musicals can and should make good action movies. Sound crazy? Well, consider this: when do characters sing in a good musical? Well, they usually do it at a crucial juncture in their story–when they are trying to make a decision, expressing their emotions, or are at a point where they can’t do anything other than sing to resolve the tension or advance the conflict. Fights and action sequences should basically work the same way. A hero should get into a fight when the stakes are too high to do anything else–they are at a crossroads, with an obvious choice to make, and we are invested in that choice as it is an important part of the story. The best action and adventure movies understand this implicitly. Take, for example, Raiders of the Lost Ark, which features many of the best action sequences in movie history–every single one of them involves high emotional stakes for Indy, for the audience, and are necessary for the plot to advance. Each sequence adds to the film, rather than wastes our time by putting the ‘real’ story on pause.

For a good example of how to both do this right and do it wrong, we need look no further than the Matrix movies. The first film was fantastic–the stakes were clear, we were invested in the outcome of the fights, and they served to advance the story. The fight between Neo and Agent Smith in the subway station is cathartic; it is the culmination of the plot, and we hang on every blow. We feel as though Neo’s life is in legitimate danger (even though we know it probably isn’t through simple plot calculus), and when he escapes agaisnt all odds, we cheer for joy. It works because it fits with the story, not outside or around it. It’s part of why we’re there. 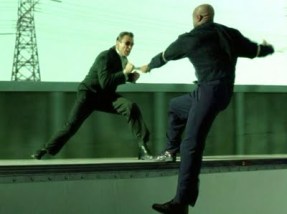 WTF is going on, here? Why are we on a truck? Who is that guy? What do they all want?

Now, let us consider The Matrix Reloaded. Now, I don’t think the essential storyline of the film was bad (John Kenneth Muir writes this review that explains why better than I ever could), but the action sequences were objectively terrible. Think back to that never-ending highway fight. Remember it? Do you remember what that was all about? Yeah, neither do I. I didn’t know when I saw it, either. I remember vaguely they were trying to catch something, but I forgot what during the scene. Oh, right–they were trying to get that keymaster guy, I think. Hell, I don’t know. All I do know is that the scene went on for a really, really long time and must have spent a lot of money for me to be checking my watch halfway through. It’s purpose wasn’t clear, if indeed it had one, and we weren’t invested in the stakes. Snore.

A lot of adventure books, movies, shows, and so-on live by the mantra that the next fight needs to be bigger than the last. Budgets get larger, stakes get higher, and CGI effects multiply like mosquitos in a Louisiana swamp. The funny thing is, though, that bigger doesn’t automatically mean better. Better means better, and what makes something better is high stakes, yeah, but stakes that we identify with, care about, and understand. If the fight doesn’t do that, then what’s the big deal? They may as well sing, for all I’ll care.