Hey guys, me again. I know, I know – I’m being annoying this week. But I’m just so EXCITED, see? Why? Well: 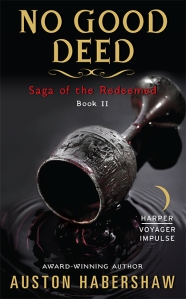 Anyway, if you’ve been keeping up with the blog tour, here’s some new entries:

I’m Interviewed over at Legendarium by the incomparable Jason LaPier!

Also, more guest posts! Friends Bishop O’Connell and Ruth Vincent have hosted my “But What About Your Second Novel” post!

Finally, the wonderful Beth Cato has hosted an excerpt of NO GOOD DEED on her blog – check it out, and may it give you a taste for more!

More to come soon! Carry on! (and I promise I’ll get back to my regular posting habits in a week or so. Pinky swear.)

Posted in Publicity, The Saga of the Redeemed 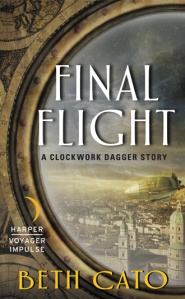 Hi, everybody! Shoveling out from beneath a mountain of papers, but today I’ve got a special treat for all of you. My friend Beth Cato has a new story out set in the same world as her Clockwork Dagger series. If you like Steampunk, fantasy, or especially Steampunk Fantasy, check it out now!

Captain Hue hoped he was rid of his troubles once Octavia Leander and Alonzo Garrett disembarked from his airship Argus. But he was quickly proved wrong when his ship was commandeered by Caskentian soldiers. He is ordered on a covert and deadly mission by the smarmy Julius Corrado, an elite Clockwork Dagger.

Now Captain Hue must start a mutiny to regain control of his airship, which means putting his entire crew at risk—including his teenage son Sheridan. As the weather worsens and time runs out, it’ll take incredible bravery to bring the Argus down… perhaps for good.

An excerpt of the very beginning of the story:

I stood at the rudder wheel of my airship Argus, in command of a ship I did not truly control. We flew north, destination unknown. A soldier stood several feet behind me. His pistols remained holstered—he wasn’t daft enough or desperate enough to fire a weapon in the control cabin of an operating airship—but he had already proven adept with his fists. My co-pilot, Ramsay, was currently getting patched up, as the sarcastic commentary he had offered was not kindly received.

Throughout the cabin, tension prickled beneath the surface like an invisible rash we couldn’t scratch. Everyone stood or sat rigid at their posts, gazes flickering between their gauges, the windows, and the soldiers in our midst. These were soldiers of our own kingdom of Caskentia, in green uniforms as vibrant as the sprawling valley below. They had occupied the Argus since that morning.

This was the second time in as many weeks that my airship had been commandeered. The previous time, rebellious settlers from the Waste had claimed it by force. I rather preferred them. Wasters made for an easy enemy after fifty years of intermittent warfare. This occupation by our own government was ugly in a different way.

My fists gripped the wheel as if I could leave impressions in the slick copper. The futility of our situation infuriated me. I couldn’t stop the Wasters before. And now I couldn’t stop this, whatever this mysterious errand was.

My son, Sheridan, was on board somewhere. I needed him to be safe, not snared in any more political drama. The Wasters had used him as a hostage to force my hand; I didn’t want these soldiers to do the same.

“Captain Hue, sir.” My co-pilot saluted as he entered the control cabin. I assessed him in a glance. Bandages plugged his swollen nose. Blood still thickened his thin brown moustache.

“You are well enough to resume your duties?” I asked.

“Yes, sir. I’ve felt worse after a night of leave.”

Ramsay knew his job; if only he could control his fool lips. I stepped back to grant him control of the rudder and leaned by his ear. “Corrado said this would be over in days. Bear through.”

I saw my own frustration mirrored in his eyes, and in the other crew as I walked from station to station. I muttered what assurance I could and exited the control cabin. I needed to find my boy.

Like the start of the story? Read the whole thing for just 99-cents–and that includes the first chapter of Beth’s novel out in August, Breath of Earth!

Beth Cato is the author of the Clockwork Dagger steampunk fantasy series from Harper Voyager, which includes her Nebula-nominated novella Wings of Sorrow and Bone. Her short fiction is in Clockwork Phoenix 5, Beneath Ceaseless Skies, and Daily Science Fiction. She’s a Hanford, California native transplanted to the Arizona desert, where she lives with her husband, son, and requisite cat. Follow her at BethCato.com and on Twitter at @BethCato.

Guest Post: Beth Cato, “How I Wrote a Novella in Four Easy (?) Steps”

Today is a special day. Beth Cato, talented writer of the Clockwork Dagger series and fellow Harper Voyager author, is paying us a visit. Read her post, and check out her work (Many steampunk! Very wow!).

The good news is that Harper Impulse Voyager sent me a contract to write a novella in my Clockwork Dagger steampunk fantasy world. Yay! The bad news is that I had never written a novella before, so I was rather freaked out about the whole thing.

Novellas tend to be 17,500-40,000 words long. There are very few magazines that accept stories of that length, so it’s a format that I avoided because it’s so hard to market (though that is starting to change). Like most writers, I tend to have my comfort zones for word counts; my stories tend to be around 1,000 or 4,000 or 6,000 words, and my novels tend to hit at about 90,000. Novellas are out in some wasteland.

But more good news: I wrote the novella, and it’s out as of November 10th! “Wings of Sorrow and Bone” features two teenage girls setting out to save a laboratory full of gremlins from a politically-powerful scientist.

Here’s how I survived going from zero to 27,000 words of published text.

1) I sent up the Bat Signal to call in friends who had written novellas.

They provided great advice, including:
– read more novellas to understand the pacing
– keep the named character count low
– think like a novel cut into a 1/3. I actually pulled out some of my novel outlines to see how long they were to get a sense of how I usually work.

2) I outlined my novella.
There is a constant debate in the writing community about if plotting or writing-by-the-seat-of-your-pants is best. As far as I’m concerned, there shouldn’t be a debate. A writer should find out what works for them, and that might change by the project.

Following that advice to think of it like a short novel, I did my usual “plot vomit” where I write out everything I want to throw in the story. It was a big mess but from there I could fill in gaps and break it into chapters.

3) I wrote and rewrote.
Since I hadn’t done a novella before, I fumbled a lot through the process. I ended up adding a new chapter when I revised, and I had to rewrite another full chapter on my editor’s advice. I had great feedback from critique partners, too–some of those same people who gave me initial advice on writing novellas.

4) I continued to read more novellas as I worked on mine.
My Clockwork Dagger series doesn’t take place on Earth, but it still required a lot of research. For this novella, that research included making a technical study of other novellas:
– How much time did they spend setting up the world at the beginning?
– How many characters did they use?
– At what point did the climax hit?
– How long did it take to resolve things afterward?
It was like returning to my college English 1B class, but a lot more useful and enjoyable.

The good news: “Wings of Sorrow and Bone” received a passing grade from my editor. I’m pretty happy with the end result, too. I can say I’ve published a novella now… and who knows? I just might write another one. 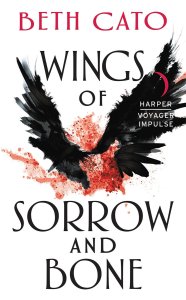 “Wings of Sorrow and Bone: A Clockwork Dagger Novella” by Beth Cato

Wings of Sorrow and Bone: A Clockwork Dagger Novella

A few months after the events of The Clockwork Crown…

After being rescued by Octavia Leander from the slums of Caskentia, Rivka Stout is adjusting to her new life in Tamarania. But it’s hard for a blossoming machinist like herself to fit in with proper society, and she’d much rather be tinkering with her tools than at a hoity-toity party any day.

When Rivka stumbles into a laboratory run by the powerful Balthazar Cody, she also discovers a sinister plot involving chimera gremlins and the violent Arena game Warriors. The innocent creatures will end up hurt, or worse, if Rivka doesn’t find a way to stop Mr. Cody. And to do that means she will have to rely on some unexpected new friends.

Beth Cato hails from Hanford, California, but currently writes and bakes cookies in a lair west of Phoenix, Arizona. She shares the household with a hockey-loving husband, a numbers-obsessed son, and a cat the size of a canned ham.

She’s the author of THE CLOCKWORK DAGGER (a 2015 Locus Award finalist for First Novel) and THE CLOCKWORK CROWN from Harper Voyager.