The Importance of Dread for Children 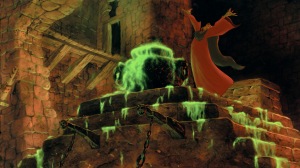 Pictured: Prime children’s programming, for sure.

Ran into an online conversation the other day discussing the feelings of dread and fear many recall from a variety of children’s movies in the 80s. The assumption was that such dread and fear is no longer in vogue – you couldn’t (or maybe just wouldn’t) make a Black Cauldron or Rats of NIMH today or, if you did, you would do it differently.

Now, in the first place, I can’t say with any authority that this is actually true. Granted, I can’t really think of any “children’s” movies quite as harrowing as the ones I remember as a kid, but they may very well be out there. In the second place, assuming it is true (or that people think it should be), I’d like to take a moment to defend such films.

For starters, let’s define terms. I think fear, dread, and horror are different things and, while I am definitely advocating for the second of those, I am very much not angling for children to encounter the third. So, to be specific: 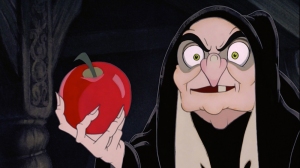 As I hope is clear, both dread and horror involve fear. Fear is the drumroll, the squeal of terror, the crash and bang your heart goes through when it is surprised or frightened. Kids have this sensation often, as the world is large and strange to them, and there is nothing wrong with exposing them to a little bit in their entertainment. Probably the best example of this is the Evil Queen in Snow White and the Seven Dwarfs: she shows up, she cackles, she says “boo,” and then she falls off a cliff. Scary, yeah, but not eliciting much dread and certainly not horror.

Horror, on the other hand, is when the xenomorph pops out of the guy’s chest in Aliens and runs across the room. 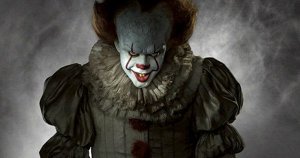 Not only is he dead (irreversible), but the thing is still out there, somewhere, on a big dark ship. And there is no help to be found. And they have no weapons. Horror is also the inevitability of death in slasher movies like Friday the 13th or the despair in the face of such monstrous things as the Holocaust or genocide in general. Horror is not for children because they lack the maturity or perspective to understand that what they are being shown is not, in fact, all there is to it. They even have difficulty differentiating between the real and the fictional. Show a kid Event Horizon or (God forbid) IT and, while I’m no child psychologist, I’d say you stand to do actual damage to the poor kid’s psyche.

Seriously, Return to Oz, what the fuck?

That brings us to dread. Dread is harder to pin down than horror or fear, I think, because it is not as clearly defined. That is really the point of dread, I think – it is uncertainty, eerie-ness. The dread I retain from Return to Oz is not because it was necessarily scary (though it was), but because it seemed to strange and so alien. I could not understand how the world worked and it was…unsettling. You look at all those heads in cases and have to ask yourself “how are they still alive? What does it mean that they are? How can this be?” The kid watching is engrossed but also freaked out. They are scared, but also fascinated.

The Importance of Dread

There is a long list of movies that made me feel this way as a kid. The Rats of NIMH, Return to Oz, The Black Cauldron, Labyrinth, The Last Unicorn, The Dark Crystal, and a lot more besides. All of these films were eerie and creepy to varying degrees. All of them had parts that frightened me. Nevertheless, I watched all of them constantly.

It should be noted that dread is not a new aspect of children’s stories. Hans Christian Andersen was a master of it, as were the Brothers Grimm and Washington Irving. You can trace that feeling – that unsettling, eerie prickle up the back of your neck – way, waay back to the earliest of folk tales. Of course, go far enough back and there wasn’t really a division between what qualified as “children’s stories” and what was meant for adults – they were just “stories.” The kids crowded around to listen to someone sing the Odyssey as much as anyone else. Our definition of what qualifies as “suitable for children” is a relatively modern invention in a lot of ways, dating back to around the turn of the 19th century, anyway.

But even in our modern conception of childhood, I think dread serves a real and important and enriching purpose for children. We’ve got to remember that children, simply by dint of their inexperience, live in a world full of the 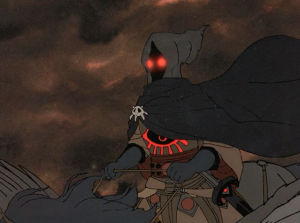 Holy crap, did I have dreams about this dude!

frightening, unsettling, and unexpected. Experiencing dread in a controlled circumstance – as in a movie – gives them a chance to sort through and understand how to cope with this feeling. It instills in them a sense of caution (important) but also a sense of hope (the hero triumphs in the end). Beyond that, these stories are also wonderful fodder for their dreams and imagination. How much of my own imagination was fired by these films that I saw when I was young? A lot, I’d say. The Black Cauldron and the Rankin/Bass Return of the King are probably half the reason I became a fantasy writer.

Now, I am no child psychologist and I’m certainly not advocating forcing your kids to watch a movie if they’re screaming a crying with terror. But, I do think that exposing children to this content is not bad for them – far from it! We live in a frightening world full of mysteries and dangers, and stories like this have a lot to teach kids about how to manage such things.

Or, at least, that’s what I think.

Like everybody here on the island, I am a frequent patron and user of our extensive train system. While I have certain reservations about the sheer number of tracks laid across our relatively small island (they do have cars now, you know, and I’d like to be able to ride a bicycle occasionally without having to lose fillings while bumping over tracks), in general the presence of the train lines makes life more convenient. Or would, perhaps, were it not for those stupid damned trains. 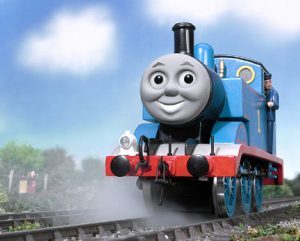 This smile makes me want to kill someone, I kid you not.

I realize that having autonomous, artificially intelligent trains is both extremely cutting edge and a draw for tourist dollars, but I for one am tired of having my livelihood depend upon the random and often childish acts of computerized trains with the emotional maturity of five-year-olds. It doesn’t matter one button how many stupid tourists our island gets if the damned trains they ride decide that it would be ‘more fun’ to take them to see the ironworks instead of stopping at my fruit stand. Do you have any idea, sir, how important that fruit stand is to paying my bills? I swear, the next time Toby cruises by my farm with that stupid grin on his creepy, latex face while taking my customers on some stupid joy ride they neither want nor need, I am going to spike the damned rails. See that I won’t! It isn’t as though the damned trains don’t derail themselves all the time for God knows what juvenile reason. I swear I saw Thomas playing chicken with Gordon – chicken! – over some schoolyard disagreement over who was bluer. There are people’s lives at stake, you fat dimwit!

Here’s an idea, you bloated technophile: rather than treating our island (and our home) as some sort of high-tech playground for your stunted AI trains, why don’t we do what the rest of the world does and get some normal trains that are piloted by actual people? Do you have any idea what the unemployment rate is here on the Isle? Think of all the jobs that would be available if we took those creepy robot engines and sold their positronic brains for scrap and then hired skilled laborers to replace them. Derailments would go down, schedules would be kept, and that stupid tow-truck at the iron works would drive at a reasonable pace and would stop accidentally lobbing railroad ties across town. Old Lady Martin’s China Shop is still trying to recover from that time what’s-his-name got over excited and dropped a half-ton boiler through her roof.

Think of the peace, quiet, and consistency of our rails if we were to finally rid ourselves of those ten-ton mechanical toddlers. They’d stop tooting at my chickens for no good reason (I can’t remember the last time I had fresh eggs), they’d stop lollygagging around as they sort out their petty emotional problems (for once I’d get to market on time), and I’d wager that 100% fewer cars filled with VIPs would get covered with soot because Edward has some kind of hissy fit over the quality of his paint.

You can swear me off as some grouchy old man if you like, Toppumhat, but I’m not alone on this island. Shape things up, or we’ll see about finding someone who will.