Fargo and the Power of Community

My wife and I just finished watching the first season of Fargo (the TV series). I enjoyed it immensely, especially the spine-chilling portrayal of assassin Lorne Malvo by Billy Bob Thornton. Much like in the Coen brothers’ film of the same name, the show juxtaposes the wide-eyed provincial innocence and “folksiness” of the people of North Dakota and Minnesota with the absolute horrors humanity is capable of. One thing I enjoyed about the show, though, was how much more thoroughly the series was able to explore this theme. (Spoilers below, obviously)

The central antagonist of the plot is the aforementioned Malvo, who moves through the small cities and towns of the frozen north with terrifying impunity. He can kill who he likes, he can do as he likes, and nobody is able to stop him. These back-country yokels are wildly unprepared to combat a menace of his dimensions. They can’t even imagine him in any real way – he is the boogey man, Lucifer, and Death astride the Pale Horse. Malvo’s every utterance is filled with malice and threat, to the point where everyone in Bemidji instinctually recoils from him.

This appears to give Malvo power. Likewise, those who Malvo corrupts also are afforded a measure of perceived power. Herein lies the tale of Lester Nygaard, hen-pecked loser turned murderer and alpha-male. Lester’s chance meeting with Malvo in the hospital changes him; Malvo demonstrates how the world as we know it – the world of rules and morals and laws – is an illusion. You can have what you want, Malvo implies, by just reaching out and taking it. Malvo even demonstrates how this is done by going out and killing Lester’s high school bully. Lester, taking these lessons to heart, kills his wife, covers it up, frames his own brother, and goes on to find himself a better wife, professional success, a bigger house, and his own name on a salesman of the year award. By leaving the rules of society behind, Lester achieves everything he ever wanted.

Molly Solverson – the only competent officer on the Bemidji police force – knows what Lester has done and even has almost enough evidence to convict him, but the bull-headed, dull, and plain old sexist police chief will not listen. His world is the traditional one, based upon commonly accepted values. He cannot accept Lester’s guilt because the crime exceeds his own limited imagination and won’t listen to Molly because of her status as a woman and as his inferior. This is all against “the rules;” things like this don’t happen in Bemidji. 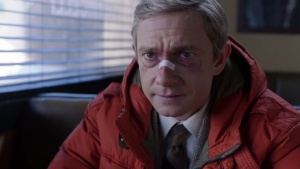 One of the brilliant aspects of this show is that it makes you yell at the screen a lot. You are howling for Molly to press her case. You are terrified at the threat Malvo represents and so, so anxious that these people – these poor, good, stupid, guileless people – are totally, completely at his mercy. When Molly backs down and walks away from her poster board of evidence, it feels like a defeat. But then the show pulls another turnaround on us: it isn’t a defeat. It’s a victory. Molly made the right choice.

Fargo is playing upon our expectations as people living in an increasingly individualistic world. We see Malvo’s skill and Lester’s cunning and we think we have identified the true power in the story. But we’re wrong! This becomes clear when Malvo follows Gus Grimley home from his aimless investigation and sits in his car outside Gus’s apartment building, where he and his adolescent daughter sleep. They are in grave, grave danger, yes? Then there’s a knock on Malvo’s window – it’s the neighborhood watch. No one of great authority, no one of any actual power – just a concerned neighbor. He sees Malvo. He knows he’s up to no good. I half expected Malvo to kill him right through the door of the car, but he doesn’t. He growls something antisemitic, but he leaves and never comes back, warded away as surely as Dracula from a church.

And that is the true power in Fargo. Community, family, society – these things are juggernaut like powers in this film. Those who remain within the safe confines of a caring community are safe, immune from Malvo’s power. Those who choose to step outside the bounds of the “normal” are doomed. When the Supermarket King digs that money up and uses it to build his business, he is in metaphysical trouble. This trouble, however, grows exponentially worse as he gets further and further from the caring bosom of family and small town life. Isolated and wealthy, he is cosmically punished for his hubris and greed. As for Lester, his end – riding a snowmobile across cracking winter ice – is preordained the moment he refuses to accept responsibility for his actions. Indeed, when he denies the existence of any such responsibility. There is no one to save him not because those people don’t exist (Hell, the cops chasing him are yelling for him regarding his safety! “Come back,” they yell, “it’s not safe!”), but because Lester has left the fold and will not return.

Malvo, then, for all his pretensions, is not the powerful one in the story. It’s Molly, and always has been Molly. It’s Molly because she recognizes that going it alone leads nowhere good. No matter how stupid the chief is, he’s the chief. She gets married, has a family, moves on. When she tells Lester the story about the man running for the train and losing one glove and then dropping the second, in that metaphor she is the passenger and Lester is the gloves. She is saying “I cannot save you; you have killed yourself.” The arc of justice in Fargo is long, but it is inexorable. Those lone wolves? Those dashing villains and dramatic scoundrels? They die, are destroyed, and are forgotten. And Molly?

She gets to be chief.